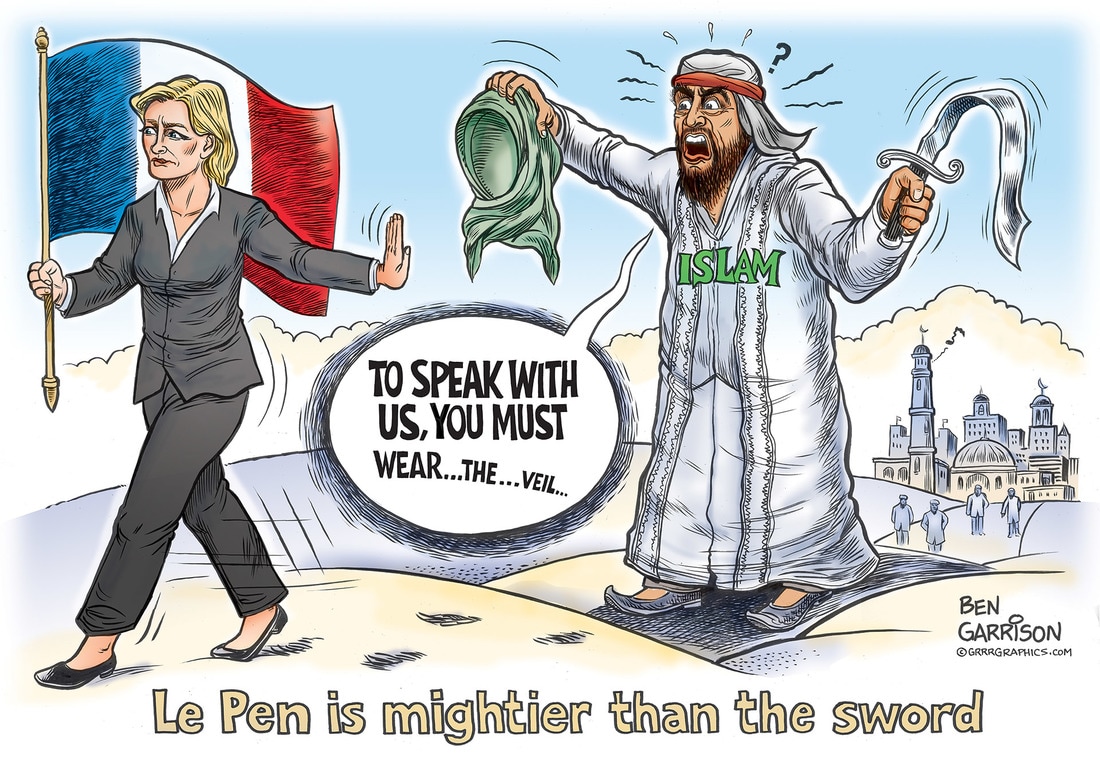 Kudos to France’s Marine Le Pen. She refused to don the veil—a headscarf—as a requirement to meet with a Muslim religious authority. I decided to draw a quick cartoon to commemorate her act, because all other female political figures usually submit.

Such a clash of cultures results almost always results in the west caving into Islam. Even Hillary Clinton wore the veil several Times during her mideast trips. So much for her standing up for western values and freedom for women, who in some Muslim countries can be whipped if they go out in public without covering their heads. Of course, we know Hillary received millions of dollars from Saudi Arabia. That’s probably why she doesn’t criticize the House of Saud’s brutality toward women.

Le Pen, like Trump, is not ruled by political correctness. We need more leaders like her. It’s time for the west to stop caving in to Islam.

Here’s my response to a man in England who complained that my previous Le Pen cartoon was ‘inaccurate’ :
Most cartoons are exaggerations and mine was no exception. Such hyperbole helps get a point across–and that point is Le Pen does not want to see her country continually cave in to Islam. Charles Martel was able to stem the tide of Islam into Europe well over a thousand years ago, but the war between Christians and Muslims has never ended. Now Islam is deeply entrenched into Europe not by means of warfare, but by means of sympathy and political correctness. They’re taking advantage of the Kafir’s willingness to surrender without a fight. After all, we’re all the same, right? No, we’re not. I don’t want to see terrorism, revenge killings, female genital mutilation, the lack of pork and alcohol, forced subjugation, on and on. We have different cultures altogether
Like Le Pen, I believe western civilization is worth preserving. I don’t want to see it replaced by a barbaric, violent medieval religion and Sharia Law. Islam is a religion of conquest–not peace.
Editorial page editors often have problems with their staff cartoonists for reasons similar to the one you raised. Cartoons are often not fair and balanced or even accurate. The editors claim readers are more interested in opinion columns, which can deliver a well-rounded and reasoned verbal case, but this is not true. Readers always look at the cartoons first. This is often a source of strife and it’s also why the number of cartoonists have dwindled in the MSM. The corporate media cannot stand loose cannons. The existing corporate cartoonists who enjoy cushy salaries and win Pulitzers are those who support the globalist narrative. That is, they cry for more taxes, more statism and more political correctness.
Not having an editor is terrific for a cartoonist’s freedom, even though at times it’s good to get their input on things such as what you wrote me about.