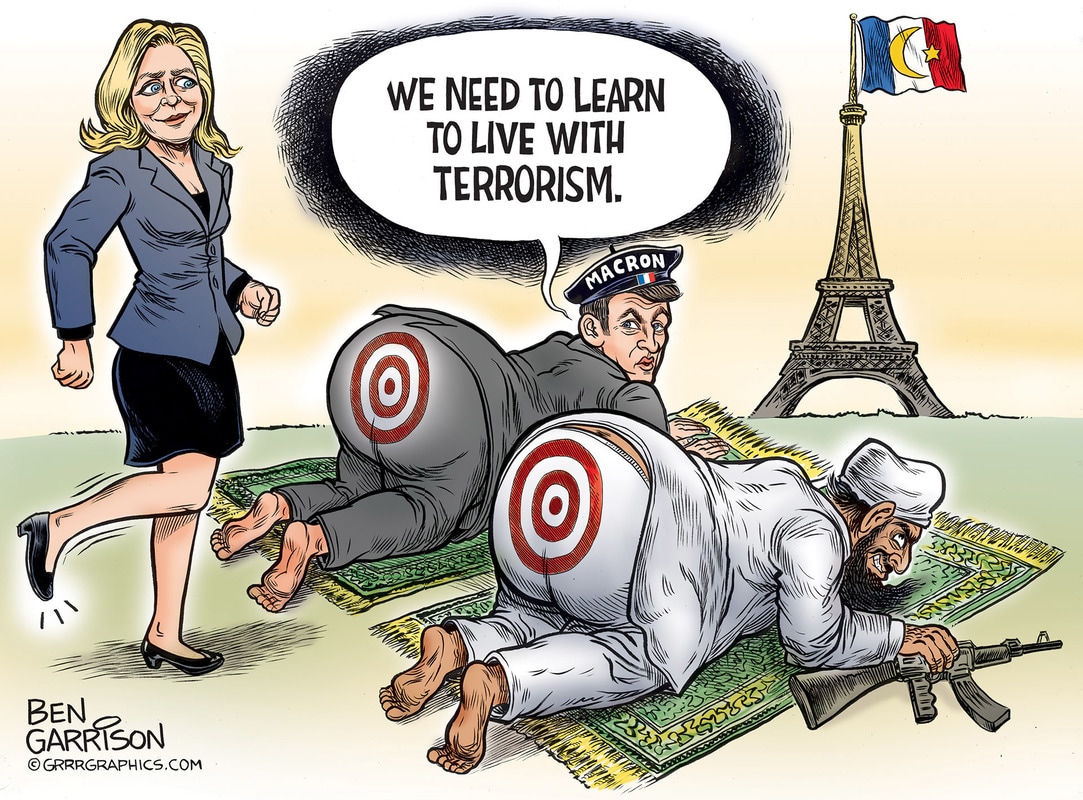 The so-called ‘centrist’ French presidential candidate Emmanuel Macron doesn’t want to offend Muslims. He claimed terrorism would be a part of the daily lives of the French people for years to come. Just like croissants and good bordeaux. He may as well wave a surrender flag and then get down on a Islamic prayer rug.
Marine LePen wants to stop importing Islam and the terrorism that always accompanies it. She is the voice of sanity in a country gone mad with political correctness. Even the pope made the ridiculous claim that ‘migrant’ holding centers are ‘Nazi concentration camps’ for Muslims. Apparently the Pope wants to help hasten the demise of his own Christianity. Europe seems to be ready to hand over their countries to Islam without a fight. Sharia law is at odds with western civilization and Muslims will use violence to implement it. The Quran tells them to do this.

Socialists continue to welcome and embrace Islam because they consider it their best means to destroy Christianity–thereby making it easier to usher in their communism. That’s why Obama and Merkel have eagerly flooded western civilization with Islam. Soros is a big player in this scheme, too.

What they really want is the erosion of the historically strong Christian foundation in western countries.

Marine Le Pen wants to end such insanity. She’s always labeled ‘far right’ by the mainstream media. There’s no longer such a thing as ‘right’ or ‘conservative.’ It’s always ‘far right.’ It’s just one of the pejorative terms used to impugn those who care about preserving the culture of one’s country.

They are called ‘nativists’ or the ubiquitous terms “racist” and “Nazi.” I don’t want to see France become a caliphate. I admire Marine Le Pen for making a stand against the Islamic invasion. I wish her the best of luck in the election.