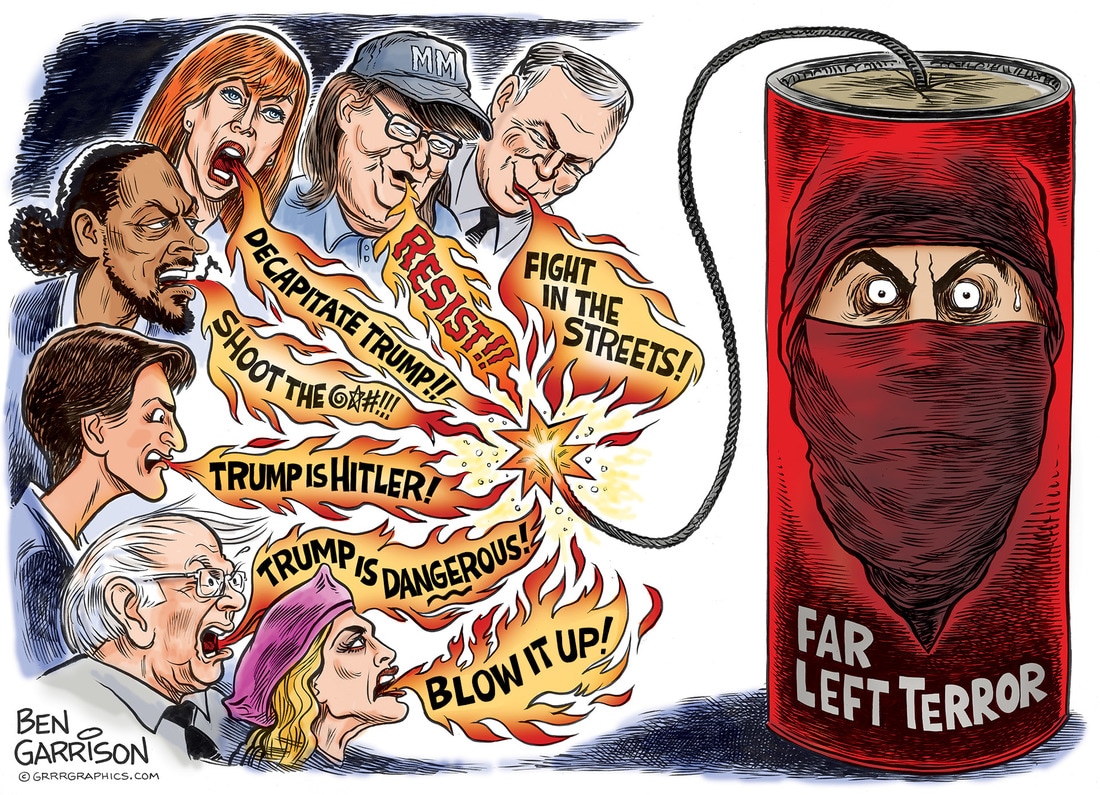 Eric Holder tells crowd, “When they (GOP) go low, We kick them…” Story

Hillary Clinton Comes out of the woods and says basically- No Power, No Civility! Civil War!  Story

For some reason, many of those on the left think it’s perfectly A-OK to call for the death of our president. Some call for it directly, others indirectly. It may come in the form of ‘performance art’ where Trump becomes Julius Caesar and is stabbed to death. Kathy Griffin joked about him being decapitated, while holding up a facsimile of his severed head. In one of his videos, Snoop Dogg was shown shooting at President Trump. Madonna wanted to blow up the White House.

Others such as Bernie Sanders, Hillary Clinton and Michael Moore are calling for some sort of ominous ‘resistance’ to Trump. Former Vice Presidential Candidate Tim Kaine (whose son is a member of the Antifa) actually called for “fighting in the streets.” Loretta Lynch called for “blood in the streets.” The mainstream media was complicit in conveying anti-Trump violence all along. Remember when they suggested he may not make it to his own inauguration? Rachel Maddow compared Trump to Hitler. It’s OK to kill Hitler, right? Once you strip someone of their humanity by smearing them as ‘Hitler’ or a ‘racist,’ then it’s fine to commit acts of violence on them. That’s what they did during the Spanish Inquisition. They labeled people ‘heretics’ and then tortured them. It’s a method starting to be used by the Antifa today. Anyone with whom they disagree with is automatically labeled a ‘fascist,’ and it’s fine to use violence against fascists. Many in the mainstream media have made menacing comments about Trump. The Secret Service must have a hard time keeping up with it all. I had trouble keeping up with all of it in my cartoon.

The far left currently hides under cloaks labeled ‘socialist’ or ‘progressive,’ but they’re really nothing but Marxists. You know, those people who believe in Marxism. The same old tired Marxism that has been repeatedly discredited. It was recently soundly discredited again in Venezuela. This is the same Marxism that caused the murder of many millions in the 20th Century. The man who opened fire on Republicans at the baseball field was for all intents and purposes, a Marxist. He was also a bad shot. Those on the left hate guns and many of them favor gun confiscation. Most probably know nothing about handling guns. This may prove to be a misfortune for them if they spark another civil war. They may find that many on the right will shoot back—and they won’t miss because most are well-trained in the use of firearms. Many are veterans who are used to shooting at people. Take this as a warning, you far-left loons who are trying to provoke a civil war. That war won’t end well for you. Maybe you should try peaceful dialogue instead. That would be a welcome change.