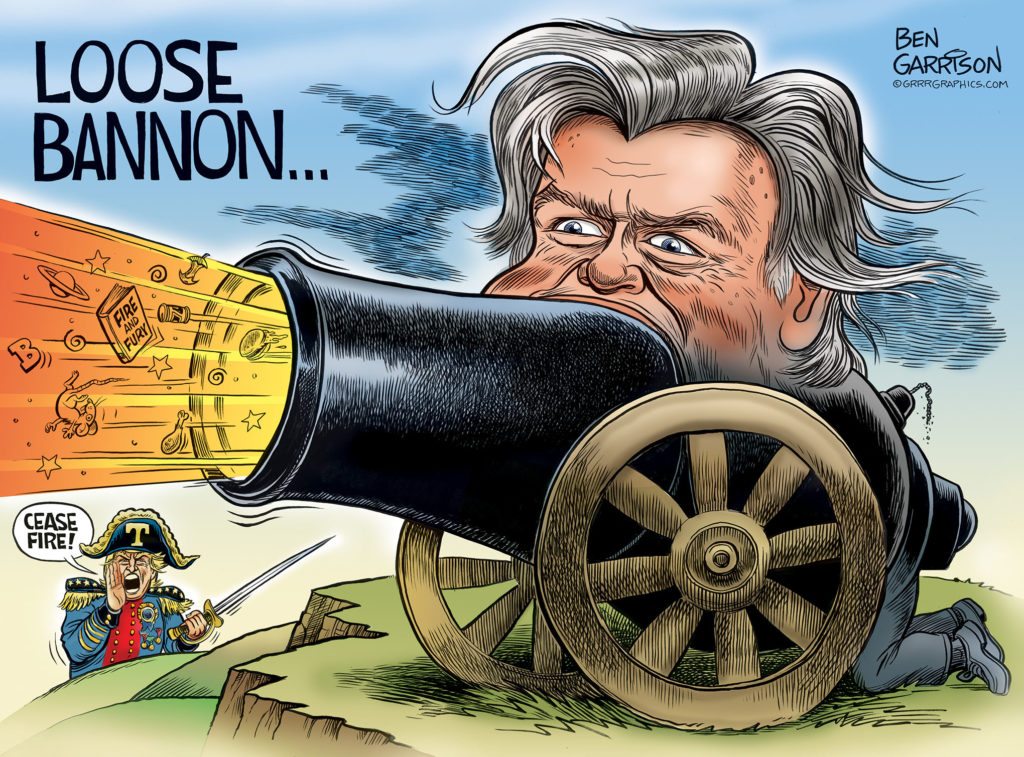 If one types “Bannon cartoon” into a search engine, a great many very negative images will be presented, mostly showing an evil Steve Bannon dominating an incompetent President Trump.

Bannon is shown helping Trump into a Nazi Uniform. There’s one showing Bannon wearing a Nazi armband as he winds up Trump. Another shows Bannon as a puppeteer controlling the president. Bannon is also shown as a dark lord, representing the ideological force driving the Trump presidency, and the leftist cartoonists portray it as racism, the KKK, white supremacy, Nazism and other nonsense. Time Magazine called Bannon the second most powerful man in the world.

The lefty cartoonists’ abhorrence for Bannon only made me like him. After all, he was Chief Strategist in the Trump administration and he was there to help expedite the policies that would ‘Make America Great Again.’ I drew a couple of cartoons cartoons that praised Bannon. When he left the Trump administration and returned to his duties at Breitbart, I thought he had left intentionally in order to better push back against Trump’s critics, thereby helping the president pass his agenda. One of my cartoons appeared in our grrrgraphics 2018 calendar, showing Bannon based on a ‘release the kraken’ theme.

Naturally I’m very disappointed to hear about Bannon’s sharp criticism of the president and his collaboration with a lefty author who will release a book of rumors that trashes Trump, his family, and his administration. I thought for sure it was more fake news from the left, but Bannon has yet to deny that collaboration. I’ve also read that Bannon was fired after it was discovered that he was the source of leaks on the Trump team.

Apparently Bannon harbored resentment over the firing. He also did not get along with others—especially Ivanka and Kushner. He perhaps thought there was undo influence by the Goldman Sachs men in Trump’s administration. I’m not too happy about that either, but let’s remember that Bannon also worked for Goldman Sachs. Bannon pushed for Roy Moore’s election to the senate while Trump wanted another candidate. Bannon convinced Trump to support Moore, who lost.

Trump does not like to lose and Bannon’s failure could only have strained their working relationship still further.
What’s most disturbing is how easily a former MAGA ally can blithely stab President Trump in the back—especially when the president has had great success in 2017.

attributed to him in the recently released Trump White House tell-all “Fire and Fury,” saying he “regrets” his delayed response and that he continues to support the president.

“My support is also unwavering for the president and his agenda,” Bannon said in a statement