The old Bolshevik mare just ain’t what she used to be, and she never was.

That’s because socialism doesn’t work and it never has. It starts with cries of ‘equality’ and ‘free stuff’ and ends in misery, despair, and tyranny.

This is not hard to figure out. Nobody wants to work for free and there is no such thing as a free lunch. Someone has to pay for that lunch. Farmers must grow crops and raise cattle. That food must be processed and shipped. Bakers have to bake the bread. Stores and restaurants work to prepare and serve that lunch. It all takes time, effort and labor. If it were free, there would be no incentive for anyone to provide it.

People expect a direct reward for their effort. Socialism breaks the link between effort and reward. Those putting in the most effort deserve a higher reward. Many will risk money to get even higher rewards, but there are no guarantees, but under socialism everyone has a guaranteed job. They have no fear of getting fired, so they don’t have to put in much effort. The pay is always the same—that equality thing, after all.

So quality declines and shortages appear. The socialists don’t accept failure so they begin to force people to work harder. They put fear back into the equation. Stalin did it with forced labor camps. He put nearly 168 million citizens into brutal gulags and 10 percent of them were killed. That slave labor kept his socialist system propped up for a while.

This is how socialism usually plays out. At first, utopia is promised where everything is divided up by the state and distributed equally. It ends up becoming sheer brute government force—the crack of a whip. Those opposing those with the whip are exterminated. (After all the other whips are confiscated from the citizens, of course).

Over 100 million people died under socialism during the last century. When will people learn that it simply does not work? They’re not learning it at our universities, which have become socialist indoctrination centers. Nearly half of young people think socialism is the way to go.

Many in Venezuela found out the hard way that it’s not the way to go, but the U.S. should not get involved. The Venezuelan people voted in the socialists and have found out they are not about to be voted out. Let them sort it out themselves. America needs to untangle itself from too many foreign wars as it is.

Get WWG1WGA Where We Go One We Go All Shirt 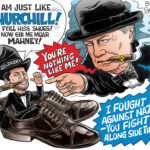 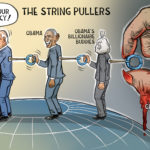 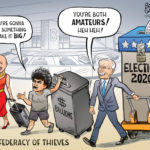 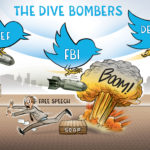