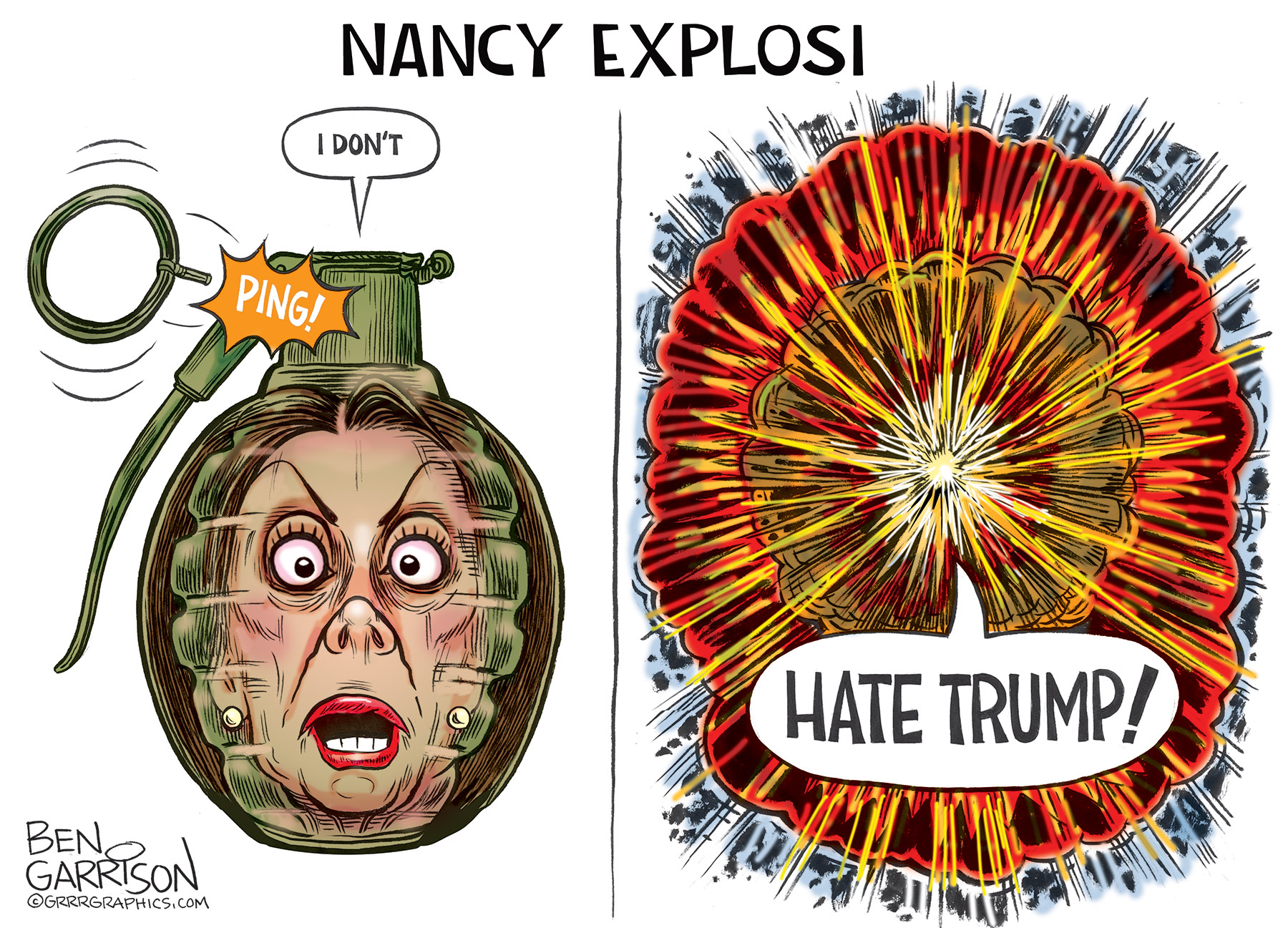 At a recent news conference, Nancy Pelosi was asked if she hated Trump. She blew up and acted angrily while claiming she was only protecting the Constitution. She added, “Our democracy is at stake.” What she really meant was, “Our Deep State is at stake.” Of course Nancy hates Trump. She can’t hide it.

Elaborating on this matter is our guest poster, “J” in Florida:

Answer:  What?  What did you ask?  Do I hate Donald Trump?  I don’t hate anybody!  How dare you accuse me of hating anyone! Yeah, I may have been trying to impeach that “orange bastard” and have him impeached at regular intervals for the past three years but that was just business. It’s like organized crime. We don’t hate the bastard. We just whack him because it’s the right thing to do and the necessary thing to do. But hate? No way. Yeah, maybe I hate you for posing that question and putting me on the spot, a pointed rebuke that my actions may be derived from animosity and insane rage and Trump Derangement Syndrome, but that’s not the case in this case. This is the case of the missing case.  Even if I did hate Trump, do you really think I’d admit that to you?

Let me tell you something, little man. You aren’t as important as me. You don’t make as much money as me. You don’t have benefits equal to mine which has nothing to do with Congress exempting itself from the ACA, and therefore you can’t even begin to fathom the smallest inkling of what hate constitutes. You can’t fathom hate at my level. We may despise Trump, loath him, rage against him, find unrelenting fault with everything he does or attempts to do, but hate?  No way. There are things I do hate and I’ll admit to that. I hate Trump’s policies. I hate his family. I hate the mere sight of his face on TV. I hate the comments that emanate from that mouth of his but there’s no way you can conclude from that that I hate Trump. I may detest him but you can’t interpret that as hate.

Hate. Spell it. H-A-T-E. That spells hate. You know things I do hate as House Speaker? I’ll tell you. I hate it when my car doesn’t start which causes me to be late for a meeting no one cares about. I hate stupid reporter questions about whether or not I hate something. I hate republicans, conservatives, traditionalists, the Tea Party types, rhinos, dumbass media who question me and my motives, who question me about hate, and everyone who remotely disagrees with me. I have a duty, an obligation, a commitment, and a responsibility to do what’s best to retain power and privilege.

Hate would be what I’d feel with Donald Trump being reelected to a second term. Now that might constitute hate. But hate now? Not me. Not here.

Don’t you ever ask me about hate again, you hear me? You sorry, slimy reporter! I detest you and your question but I don’t hate it. I’m just clarifying my thoughts and feelings for the record.  I hope this makes things clear as crystal.

Share our new video with all your MAGA friends!  Subscribe to Jak America and get ready for 2020~