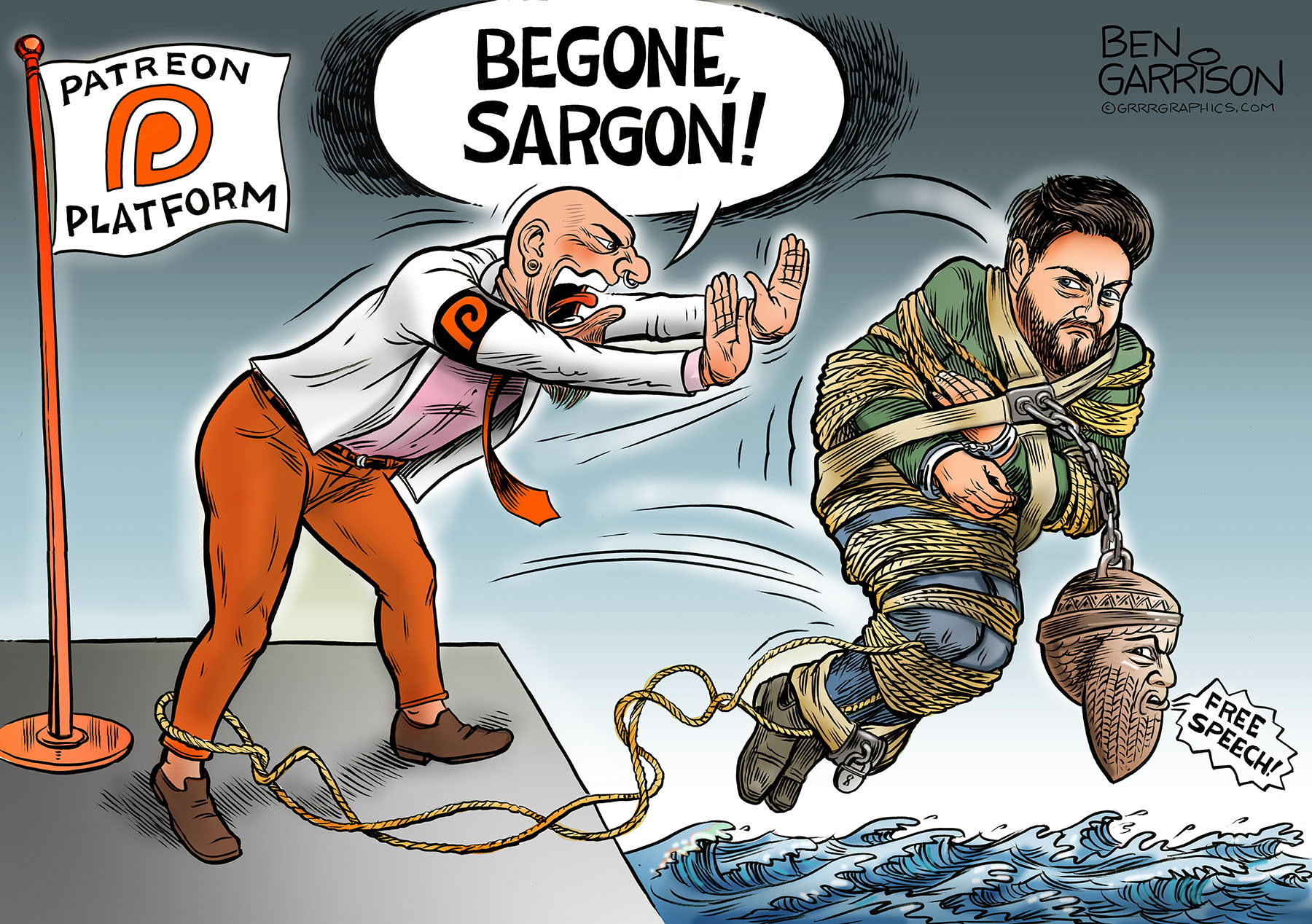 Patreon, a platform that allows people to support creators of various types, suddenly and unceremoniously booted Carl Benjamin, also known as Sargon of Akkad, off its platform. The reason? They accused Benjamin of engaging in ‘hate speech.’

This surprised me because I know he’s neither racist nor calling for violence. It turned out that Sargon used the “N” word and that was the reason for Patreon’s action, yet they failed to reveal the context. Sargon was using the word to insult online Nazis who were apparently harassing him. Patreon’s policy states they will not allow such things on their platform. The only problem with that is Benjamin did not use the slur on Patreon—it was posted elsewhere. So now Patreon is searching all over the Web for reasons to kick independent voices off their platform? Have they become another online free speech nanny?

Patreon and Silicon Valley-owned social media platforms in general have already kicked off Nazis. Web hosting services have blocked their sites. Now they’re all afraid of hurting the feelings of those Nazis? It makes no sense. More likely, they used the racial slur as a facile excuse to give Sargon the boot. They already kicked off many other popular Internet personalities such as Lauren Southern, Milo and Gavin McInness. None of these people are racist.

The real reason for the continued attack on conservatives and libertarian personalities? They played an important role in getting Donald Trump elected president. The Swamp realized that less and less people are watching their fake news ‘mainstream’ media. Instead of watching CNN, they watched and listened to Sargon, Alex Jones, and many other conservative citizen journalists. The Swamp, which includes the leftist Silicon Valley billionaires, now calls such journalists ‘alt right’ or ‘far right’ in order to make them sound extreme and sinister.

Rachel Maddow gets paid $7 million per year to relentlessly attack Trump with her ‘Russia Russia Russia’ collusion lies. The CIA man, Anderson Cooper, makes $12 million per year at CNN and has a whopping net worth of $110 million. Don Lemon makes only $1 million per year. Oh, that’s tragic. Especially when considering that less people are tuning in to those millionaires. Only old folks are still watching them. Most people are now getting their news online from podcasters and citizen journalists, many of whom barely get by and depend on donations from supporters. Now they’re getting their lifelines pulled. It’s not just a form of censorship. It’s economic terrorism. They want citizen journalists to be afraid of getting ‘de-platformed.’ They want us to start saying the safe, politically correct things.

Starting our own platforms is no easy feat. Want to start a new PayPal? The central bankers won’t allow it. Website providers will resist hosting conservative media. They want us to keep using the existing platforms that channel the same brainwashed CIA-dictated material that they’ve forced on us for decades. The Deep State wanted Hillary and many refused to vote for her because they listened conservative citizen journalists online. They want Silicon Valley to remedy that for 2020.

Fight Censorship with a donation so we can keep drawing cartoons like this! Stop the unhinged Left!   Click to support now!

We continue to depend on Patreon to help us get by. We would not be able to draw cartoons without donations and people buying our books and prints. We have had some generous benefactors who bought our original cartoons and others who have commissioned them. Sure, we would like to jettison Patreon in protest like Sam Harris did. We commend him for that, but we lack the resources Sam has. That said, we expect to be kicked off eventually.

We are headed toward a dystopian place if Silicon Valley wants to censor or ban conservative voices. They claim they own the platforms, so they can do as they like. What’s next? Will the phone companies shut off phones of certain callers because they don’t like what is being said over the phone lines? Will banks shut down accounts when people try to donate to conservatives by US Mail? Will Internet service providers shut off service because they don’t like the links clicked on by their customers?

When I drew a cartoon that particularly annoyed many on the left, I received an avalanche of hate mail. One threatened, “I will not rest until you are jobless, broke and living on the streets.” That’s the attitude Silicon Valley now has toward conservatives. It’s why we need to break up their monopoly on free speech and bring about an Internet Bill of Rights.

We are in the process of moving to SubcribeStar.com as a Patreon alternative. But unfortunately Pay Pal has refused to be a payment service available to them. Now payment processors have joined the censorship fight against freedom of speech. What’s next?

Luckily SubscribeStar is not giving up and looking for a new payment process. 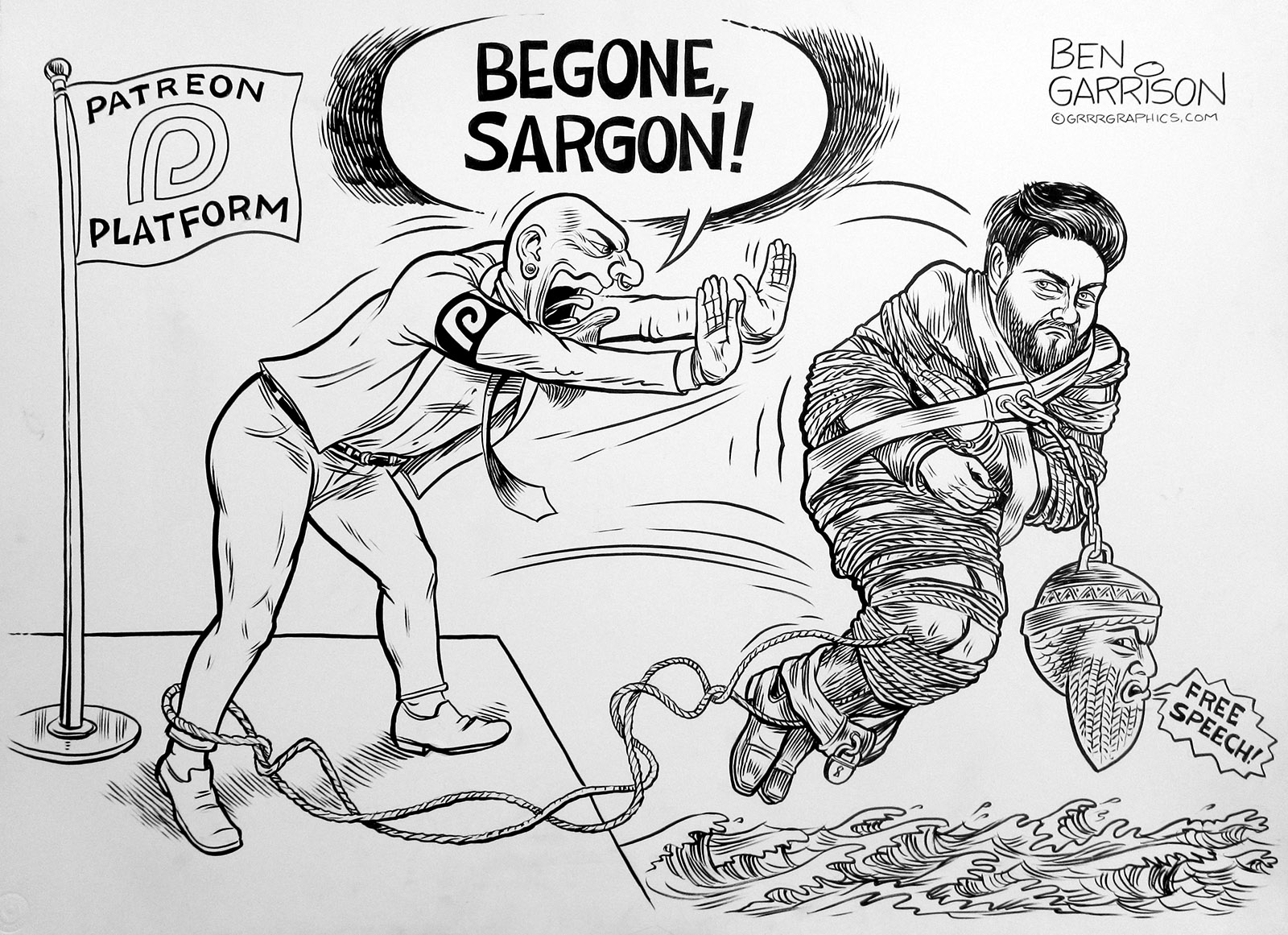