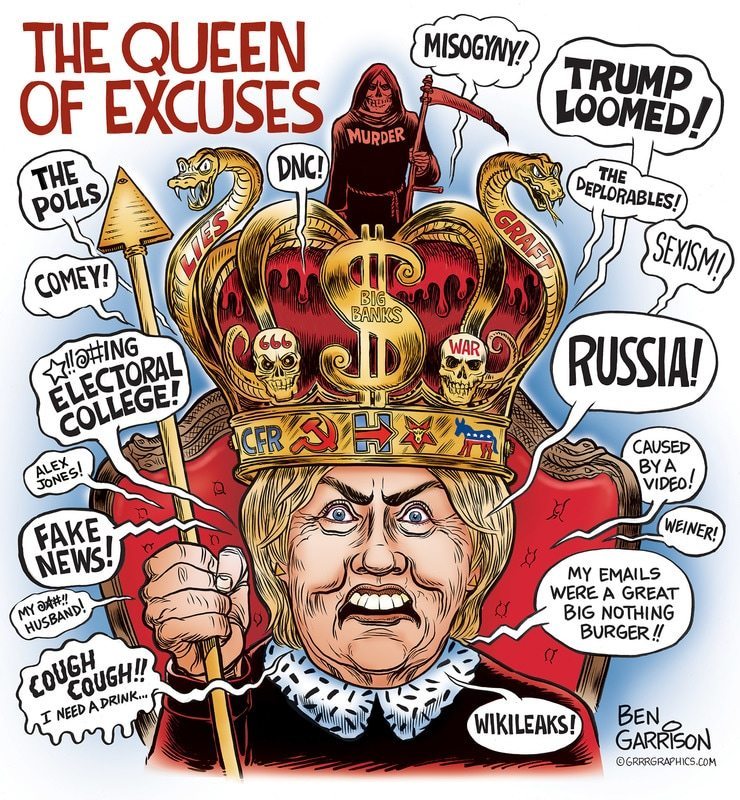 She usually prefaces her complaints by first saying she takes full responsibility, but then she launches into her blame game—and she blames everyone but herself. She outspent Trump by more than a two to one margin, but Trump out-campaigned her and made far more appearances to his packed venues. Hillary didn’t bother much because she thought it was in the bag all along. After all, that’s what her skewed polls told her. She once said he never even thought of Trump anymore. The Clintons always used their power and crooked games to rig elections in their favor. Why would she expect things to be any different? All Clinton thought she had to do was talk about ‘glass ceilings’ while the globalist deep state-owned mainstream media praised her as being the most qualified candidate in history. CNN constantly talked about the ‘historic’ Clinton and expected the brainwashed masses to vote for her no matter what.

Yet the MSM had lost its persuasive power. The Internet was the instrument that swayed minds and Hillary was so out of tough that she simply couldn’t understand that. She instead insulted pro-Trump Americans as ‘deplorables.’

So Hillary lost despite her advantages. She flew into a drunken rage and didn’t even bother to address the crowd who had been waiting for her patiently and for many hours. She sent the satanic pedophile Podesta to tell her supporters to go home. She lacked the class and accountability to tell them herself.

Instead of going away and accepting her defeat gracefully, she instead concocted the ‘Russia’ story while claiming she was going to lead the opposition, which wanted to impeach Trump. What she’s doing is quasi-treasonous.

It’s time for Hillary to go away for good, but her ego and lust for power and control simply will not allow her to do that. Instead she will probably run again in 2020. If she does, she will likely face an even worse defeat. Young voters will see her for what she is—and old, corrupt hag who is firmly in the pocket of the central banker global elite establishment. The Deep State will probably deep six her since they know this, but that remains to be seen.

Click here to make a one time donation and keep the Cartoon War against Hillary and her minions going! Thank you!