The Real Insurrection Was November 3rd, 2020

Last year on this day I watched a large crowd of Trump supporters walk into the Capitol Dome. My reaction? I was happy to see it. After all, the presidential election had just been stolen by the Socialist Democrats for a demented stooge named Joe Biden and nothing was done about it. Why not directly show our representatives that we were angry?

As it turned out, the dome breach was arranged to happen by the Socialist Democrats and a corrupt FBI. Pelosi made sure the Capitol was left unprotected. Barriers were taken down. FBI agents were everywhere. One of their operatives, Ray Epps, repeatedly yelled at Trump supporters and urged them carry their protests inside the Capitol building itself. Later, those who entered the building were thrown into a Washington D.C. prison to suffer heinous conditions and solitary confinement without bail or trail. That’s what socialists such as Pelosi do—they punish their enemies with prison torture and gulags.

Pelosi’s hatred for Trump has long been obvious. She presided over impeachment proceedings based on zero evidence and she shamelessly tore up President Trump’s State Of The Union speech. Her goal now is to prevent Trump from running again. This is Biden’s goal too when he feigns anger about the protest. Biden promised to unite the country, but he’s a colossal liar. He’s done nothing but create deeper division. Joementia could pardon all involved, but he doesn’t want wounds to heal. He wants to salt those wounds.

The Socialist Democrats continue to make the January 6 ‘riot’ equal to 9-11 or Pearl Harbor, but it was only a protest and most Americans don’t see it as anything too momentous. Shame on those Republicans who are also calling it an ‘insurrection.’ There was no insurrection. Nobody was armed except for armed government operatives. One of them murdered Ashli Babbitt.

Our Fight For Freedom Bundle – Three Classic Posters at 66% off- click to order your signed prints today!

Now the January 6 Committee is threatening and harassing Trump supporters who weren’t even there. Mike Lindell for example. It looks like anyone who supported Trump can now be accused of being an ‘insurrectionist.’ Pelosi wants another impeachment of sorts. This time she’s going after millions of MAGA-minded Americans. She wants her revenge. When she’s finished she will leave her crime-addled, drug and feces-riddled San Francisco and move into her mansion on the coast of Florida (never mind climate change and rising seas) where she will luxuriate and spend her fortune amassed from years of crooked insider trading.

My sympathies go out to all the Trump supporters who are languishing in prison due to the election-stealing traitors who put them there.

NFT available of this viral Cartoon Click to View 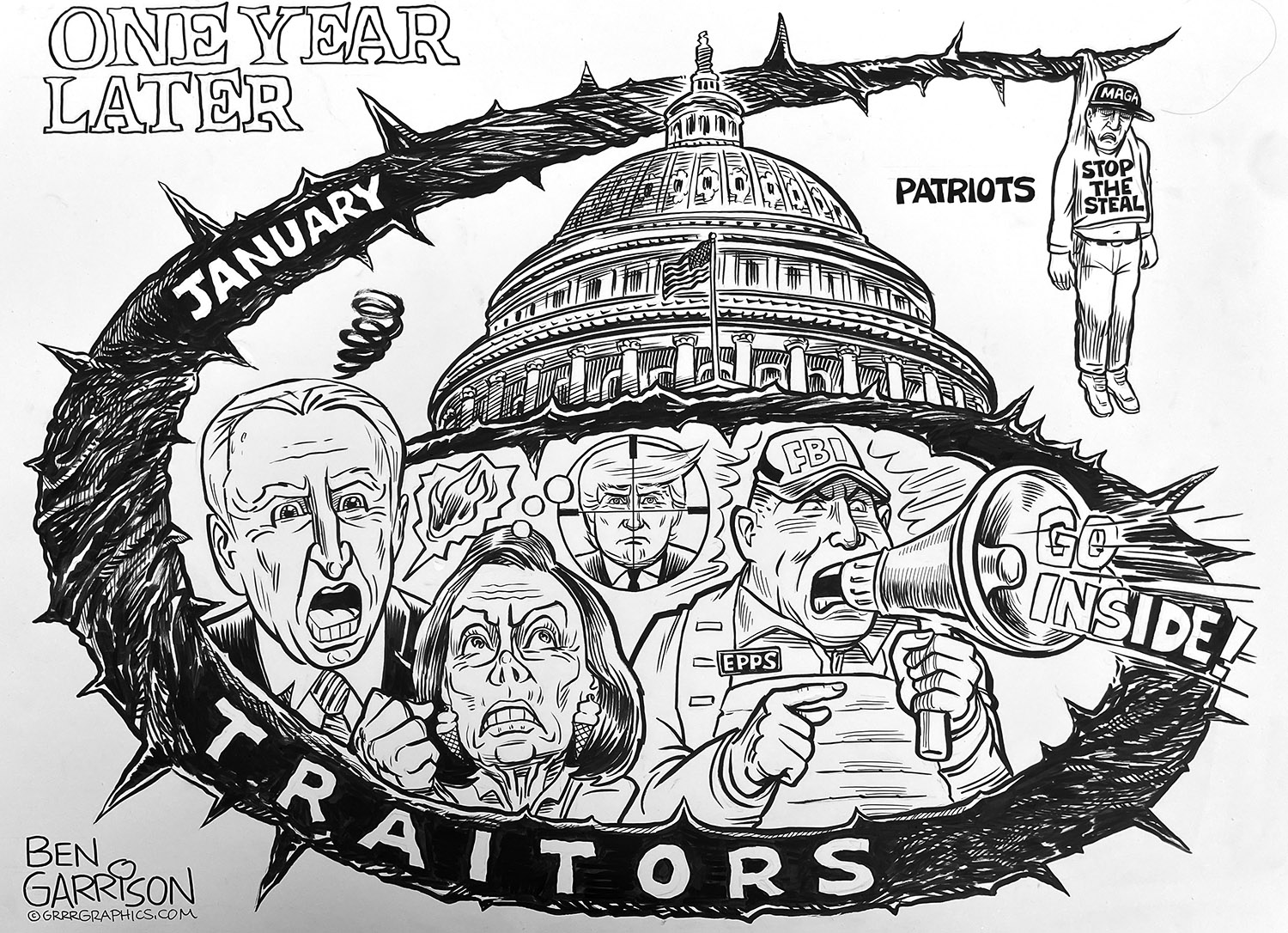