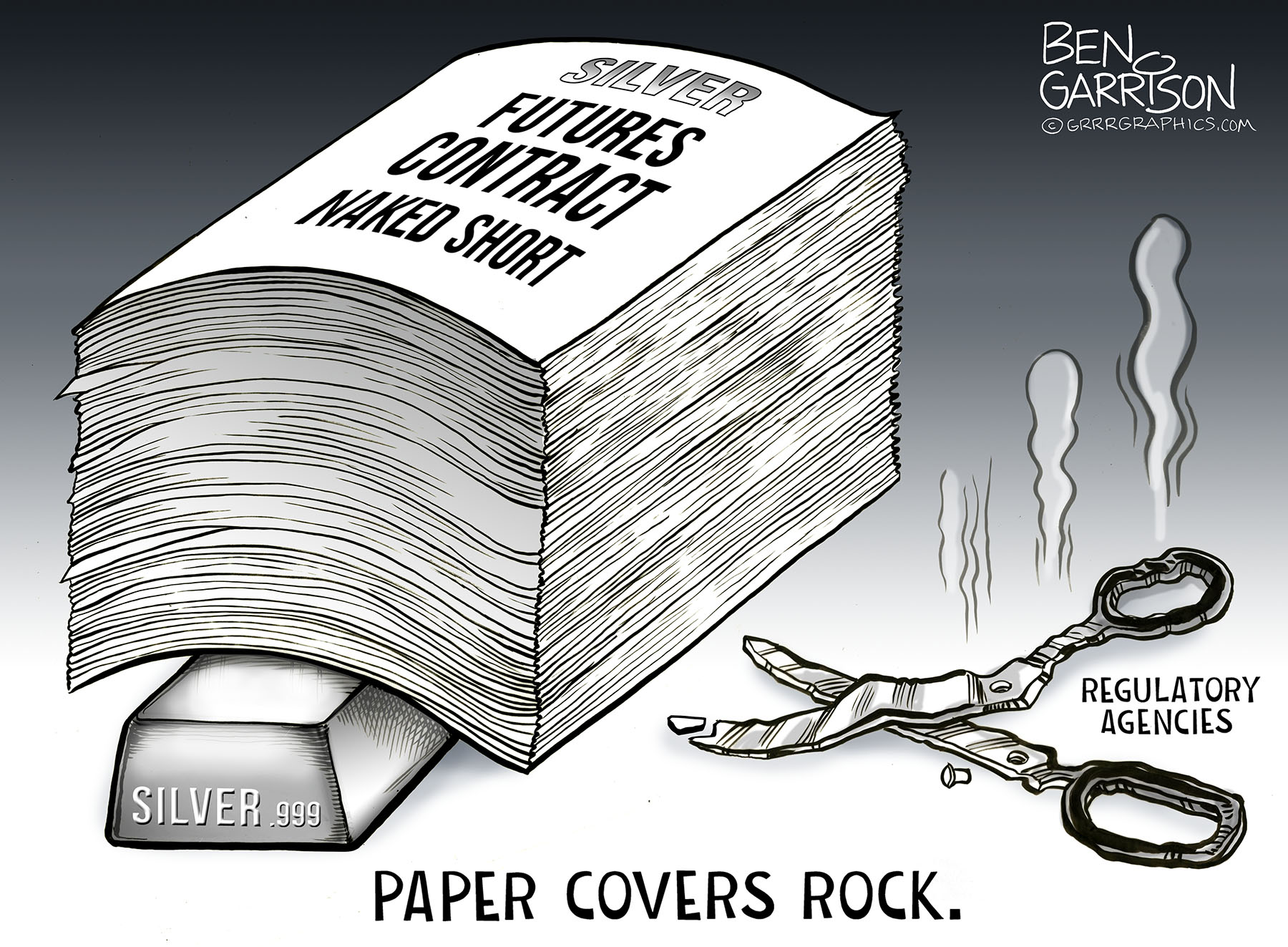 In the case of silver, big banker paper also crushes scissors. It can crush anything. In fact, paper seems to win every time. It can’t lose. After all, the paper is issued from dominant globalist billionaires who own the banks that own the Federal Reserve. They own a money printing press and they’ve used it to their advantage. They never lose.

Earlier this week the group known as WallStreetBets discovered this, even though I was rooting for them—the underdog. How can you win against an entity that has a monopoly on money? Mega billionaire oligarchs aren’t about to be put in their place by a rabble from Reddit. The ‘diamond handed’ buyers of GameStop were sorely tested as we saw their stock plummet from nearly $400 to well under $100 in a mere two days. Will it bounce back? I doubt it. The mega-billionaires easily bend the rules to their favor. Buyers were limited to 1 share of GameStop per day. The stock was halted many times to slow its momentum. The corporate media went dutifully silent. The market makers used dirty tricks such as ‘spoofing’ (fake ask walls) all the way down. Game over, GameStop.

Now WallStreetBets think they can repeat their flash of success with silver. This is a vast ambition compared to running up a heavily shorted small cap stock.Buying physical silver will not deter the big bankers who control the price of silver.

They can print up unlimited paper silver contracts and sell them on the commodity exchanges. They don’t need to have the silver they are dumping. It often does not exist. They know that few buyers want to take actual delivery of a heavy metal that’s expensive to track, store, and guard. Instead they offer buyers a cash equivalent if the price goes up. Take it or leave it.

It’s true that in 2011 JP Morgan almost got caught when silver ran up to nearly $50 per ounce. They were rescued by their collusive traders who used illegal means to drive it back down to $13. But JP Morgan apparently learned their lesson and they scooped up a lot of the shiny metal on the lows. They are said to own around $100 million ounces now. That might be enough to help bail out their banker colleagues in an emergency, but will it be enough? Meanwhile, the COMEX silver futures trading continues to determine the price and banker controllers can drive it down to whatever price they want regardless of demand. It’s not a free market, but the CFTC and regulatory agencies don’t care.

This means the silver stackers have to pay ridiculous premiums during increased market demand. Various silver bulls tell them to simply buy and be patient, which means they could be holding their stacks for decades on the losing side of their buying. All those people who just snapped up silver last weekend could be in for a tough lesson. Even though those online dealers said much of their stock had sold out by Monday….by Tuesday the silver price was slammed DOWN by those who own a money printing press. Supply and demand be damned. Silver is rigged. Many silver buyers end up realizing that silver, though pretty to look at, is a lousy investment. It was never supposed to be an investment. It’s supposed to be a store of value because it’s real money.

That’s why the Goliath bankers want silver controlled. They do not want constitutional money threatening their debt dollar! If silver hadn’t been controlled it might have made a Bitcoin-like run and exposed their immoral system of debt dollar slavery.

I realize the GameStop trading event as well as the subsequent silver pile on was never about the company’s value or the value of the shiny metal. It was about us debt slaves sending a BIG MESSAGE to the big Wall Street hedge funds. It’s a form of rebellion. The hedge funds have now answered back with their own message: ‘It’s a rigged game and we’ll change the rules midstream in order to CRUSH you. You’ll own nothing and you’ll be happy!”

The mega-banker oligarchy doesn’t worry about regulatory agencies. They own the regulatory agencies. They own a money printing press which has enabled them to buy the politicians, the courts, the media, and the education system. Nobody is going to take down the top one tenth of the 1 percent until we can destroy the Federal Reserve and they won’t let that happen. They’ll drone strike activists first. They’ll assassinate any president or politician who tries. They see us as their slaves and that’s the end of it. We did little to stop them from setting up the Federal Reserve and the IRS. The American public has always been easily brainwashed and led about by means of fear and propaganda. Now we’re seeing the end game—we’re becoming slaves to the oligarchs and their Chinese-style socialist government.

Those oligarch elitists control the horizontal and the vertical, and the market dances to their tune. Many will say I’m too cynical or negative, but we also saw them steal an election, shut down a pipeline, destroy jobs, as well as forcing us to wear useless masks. Not to mention they now want us to get jabbed by their deadly vaccines. They control the media—social and otherwise—and now they control the vote. Yes, the controllers are firmly in control. As long as silver remains tied to the debt dollar, buying silver will do nothing to stop their agenda.

Are You on Telegram? Please Follow us at RealGrrrgraphics!Can they be stopped? I think it’s too late. All we can do now is protect ourselves and our families through buying buying guns, ammo, and storable food. We need to concentrate on our communities, our grass root sheriffs, and politicians and then resist the top of the pyramid. For example, we can stop wearing their masks of submission. It’s time to face reality, no matter how grim. Nobody is going to save us. Patriots are not in charge back in Washington D.C. Traitors are in charge. Stop counting on others to save us. We have to save ourselves.

Hang in there Ben- it’s not over by a long run!  Dave won’t save you!