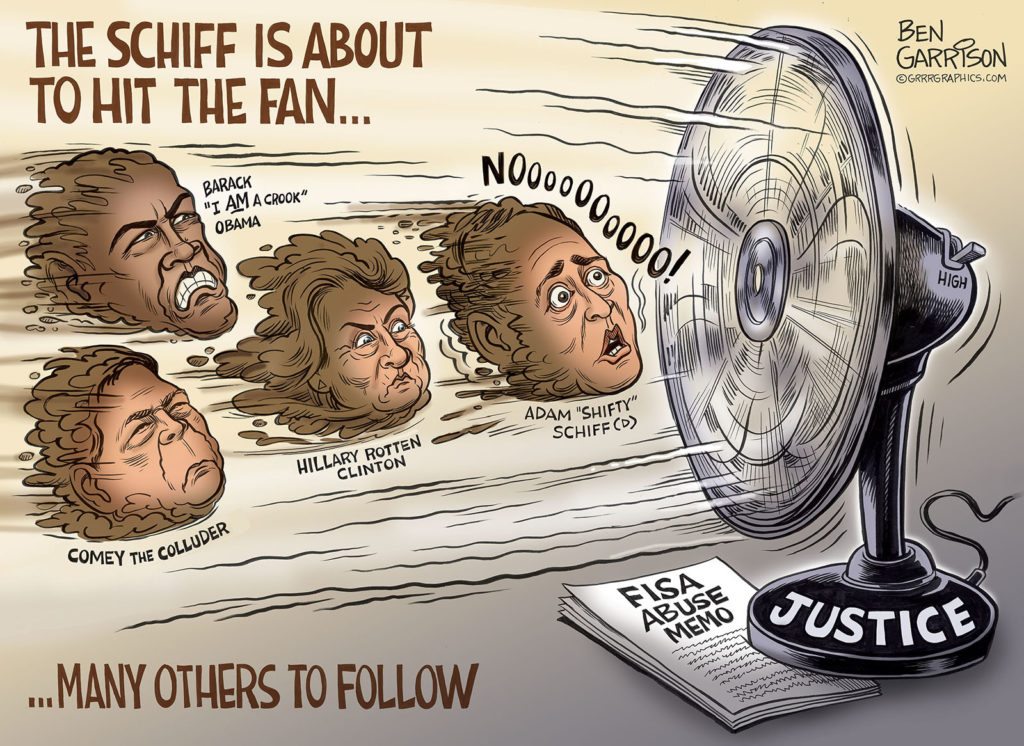 The FISA abuse memo is dynamite. It can and should blow up in the collective face of the Deep State.

Those crooks have for too long considered themselves above the law, perhaps because they’ve grown complacent and too used to always getting away with their crimes. Hillary Clinton is a prime example. So is the narcissist Barack Obama, a CIA creation who has abused the FISA warrant process. Essentially, he committed a felony by using a fake, paid-for fabricated anti-Trump dossier as the basis to illegally spy on private citizens. He did this to not only protect his Deep State masters, but also to help cement his legacy from being dismantled. The FBI became politicized at the top and they also did their best to make sure their chosen candidate, Hillary Clinton, was elected.
Every time a donation is received, A cartoon gets it’s wings…

The Deep State operatives are no longer completely in control after the election of Donald Trump, which is one of the reasons they’re so frantic about getting him removed. They know they have broken the law and have attempted a coup agains our Republic. They are traitors who belong in prison. They fabricated the Russian collusion narrative, but that is a proven lie.

The FISA memo proves the politicization of spy agencies as well as the criminal deeds carried out by those who held high office. It’s high treason. These traitors will soon be hitting the fan of justice and it could get very messy—not only for criminals such as Obama, Hillary and Comey, but also for those who are still in Congress and doing the bidding of the Deep State crooks.

Adam Schiff was eager to leak private testimony about Donald Trump Jr., hoping to further the Russian Collusion narrative that has now been exposed as fiction created by Podesta and Hillary to take back power. Schiff is not so eager to leak the FISA memo, which proves the criminal misdeeds carried out by those using the Russia collusion lie to topple our lawfully-elected president. Donald Trump Jr. himself pointed this out and tweeted #FullOfSchiff. That was the inspiration behind this cartoon.

Schiff is in the center of the corruption and is trying to prevent Chairman Nunes from releasing the FISA abuse memo. If the memo is released, it will mark the end of the Mueller witch hunt (which has cost the taxpayers countless millions of dollars) as well as Schiff himself. After all, he’s part of the criminal conspiracy that has broken the law in order to further the Deep State. Lock him up. Lock them ALL up!

It’s time to release the memo to the public and start the blades of justice spinning—on high.