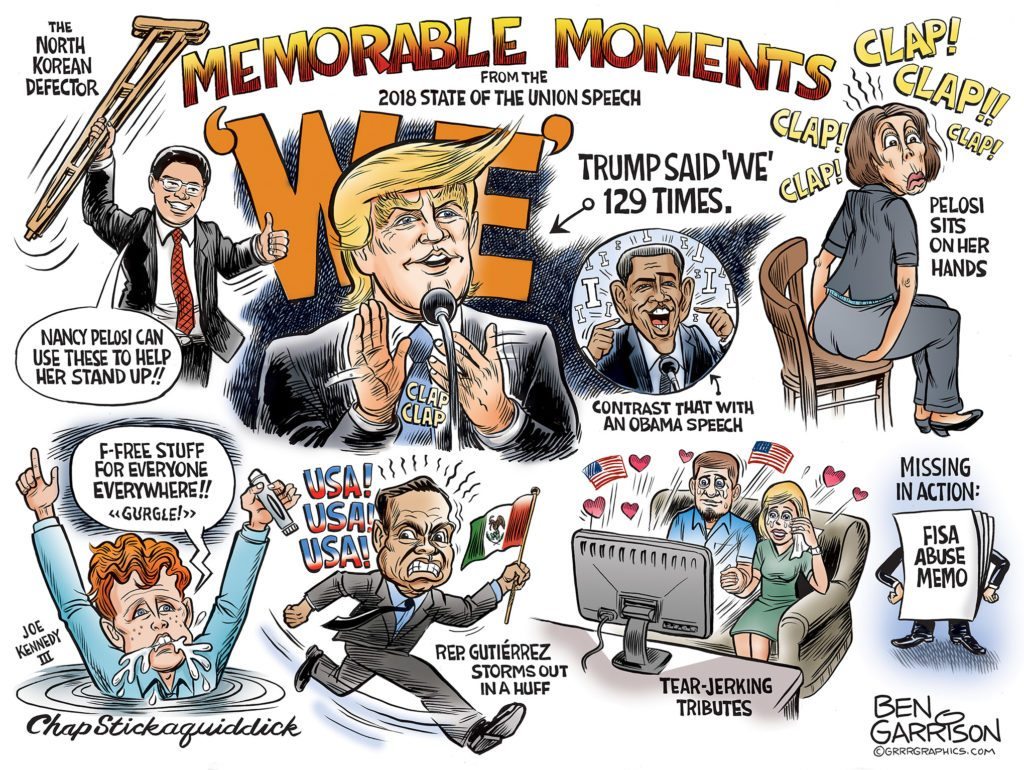 UPDATE Feb 5, 2019: President Trump will give the SOTU speech today, the speech was delayed by Speaker Nancy Pelosi in order to embarrass Trump. Pelosi hates Trump so much she will gladly destroy the country to get revenge over the 2016 election. Look for her to scowl and juggle her dentures as she sits behind Trump tonight!

President Trump’s State of The Union Address was filled with memorable moments, many of which were very emotional.

I was surprised by the number of tributes made to people in the audience, which included victims of tragedy as well as heroes—both civilian and military. The image of the young man with the crutches who escaped North Korea has stuck with me because I’ve read several books about the unbearable cruelty taking place in that country. We must never allow America to slide toward the kind of tyranny faced by the citizens of North Korea.

The president pointed out that Americans are dreamers too, and their dreams need to be protected from endless illegal immigration.

Many “dreamers” are good, hard working people, but they’re still law breakers and too many come here to collect free money and services. Some include murderous MS-13 gangs who attack and murder law abiding American citizens. Trump proposed a compromise. In exchange for letting millions of current illegal alien ‘dreamers’ stay, border security will be ramped up and enforced and the wall will be built. This was too much for Representative Luis Gutiérrez, who stormed out of the chamber as chants of “ USA, USA” broke out.

Luis wants open borders and his mind is closed to compromise. Trump is forced to deal with this kind of radical anti-American mindset.

While there were many angry scowls on the stony faces of Democrats, Pelosi’s contemptuous visage was the worst. She not only refused to applaud or stand up, but she also admonished a fellow Democrat who did. The left’s hatred for the president is ugly, visceral, ludicrous and self-destructive in its irrationality. Too many many are addicted to their vile hatred for Trump. They remain adamant about implementing their vision of socialism for America. Let’s face it, the Democrats are not only “anti-Trump” but “anti-American” as well.

I was a bit surprised Trump did not mention the memo or the Deep State corruption, but it looks like that will be addressed—and soon.

I watched Joe Kennedy III make the Democrat’s rebuttal in some sort of garage. There was a car behind him. It should have been a limousine—as in ‘limousine liberal,’ because that’s what Joe is.

I thought he was a weak speaker who espoused the same old ‘free stuff’ socialist rhetoric. He wanted to tear down Trump’s wall if it’s ever built and make sure the entire world pours in to get free stuff—and vote for Democrats, of course. I kept wondering why he had spittle coming out of his mouth. He later claimed he had a Chap Stick problem. It didn’t stop a reporter at CNN from heaping enthusiastic praise for Kennedy. She claimed he was a much better speaker than Trump. Kennedy could be a stuttering, drooling drunk and she’d still say that. I doubt this latest Kennedy will go very far. Too many millennials and young people don’t know or don’t care about Camelot or the Kennedy mystique. Besides, Americans are sick of dynasties.

We’ve all had enough Kennedys, Bushes and Clintons—especially Hillary.