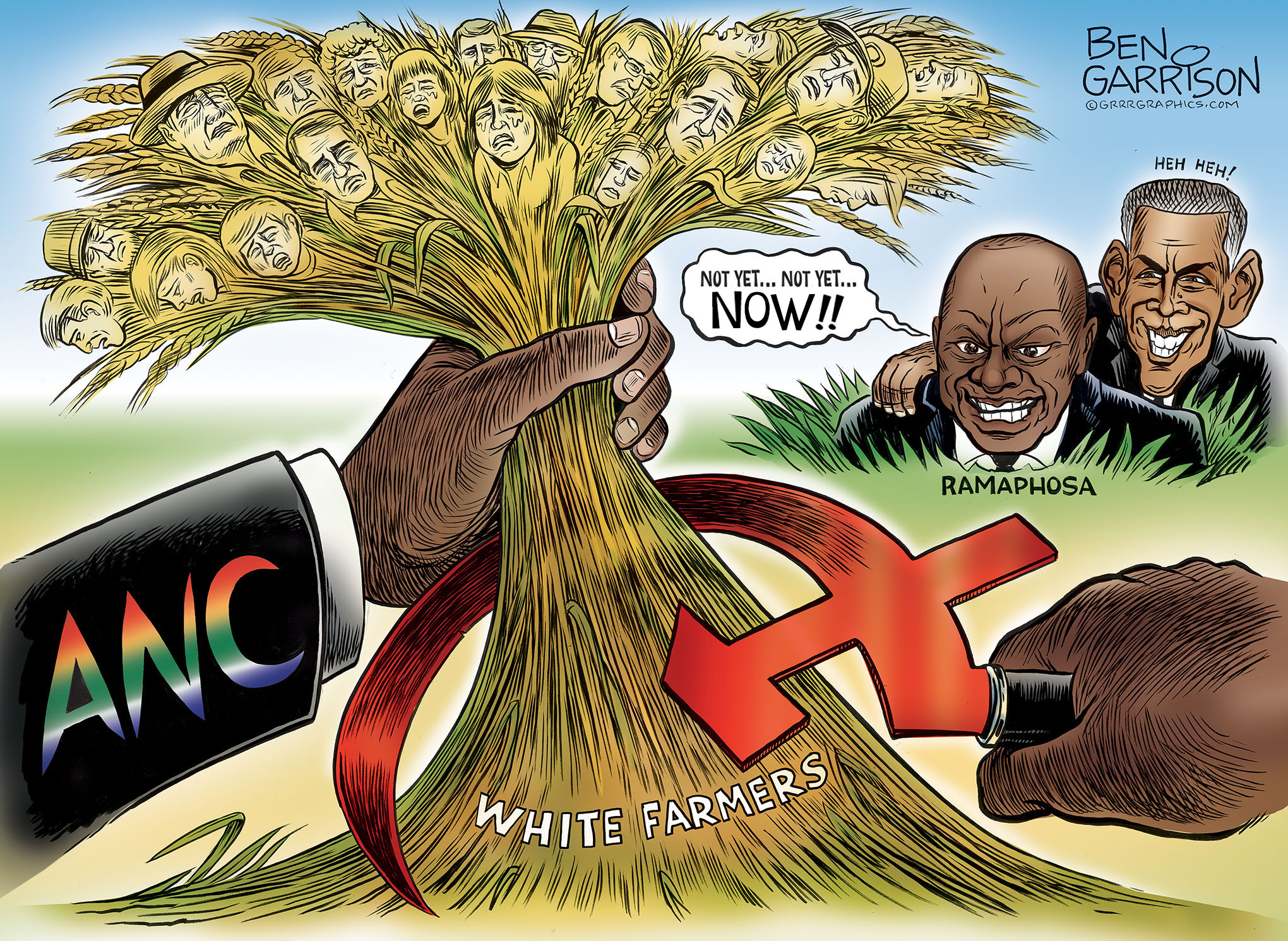 When Zimbabwe’s Marxist dictator Robert Mugabe confiscated the land of white farmers, disaster ensued. The country was once a breadbasket, but after the white farmers were chased out, agriculture collapsed. The economy was ruined. Inflation ran rampant. Zimbabweans began to starve and food aid became necessary. Mugabe is notorious for his anti-white racism. He once stated, “The only white man you can trust is a dead white man.”

Similar anti-white hatred is being expressed by black political figures in South Africa. Many are communists.

To me, the biggest problem is the communism. It always leads to deleterious results–but when it’s combined with racism, it quickly leads to genocide. Far too many South African white farmers have already been brutally murdered. The details are horrific. The local police have been sluggish. South Africa has an alarming murder rate and only 10 percent of the cases are solved. It is estimated that one out of three men in South Africa have committed rape. HIV is rampant. Politicians are corrupt. For an excellent description of what has been happening, watch Lauren Southern’s excellent documentary:

Unfortunately, any time white people complain about black crime, accusations of white racism or even cries of “Nazism” soon follow. Southern and Molyneux are truth tellers and not racists, but New Zealand wouldn’t even allow them to speak there. The ‘mainstream’ media in America have finally begun to allude to the problems in South Africa, even as they continue to tout Mandela and his ‘rainbow’ country. Mandela was a communist and began his ‘struggle’ against apartheid with bombings. Mandela’s wife praised the practice of ‘necklacing.’ Blacks who refused to join Mandela were forced to wear car tires sloshed with gasoline. They were then burned alive.

Yet Mandela became an icon. Obama gushed praise for him in a speech that took place during his trip to Africa. In fact, Obama considers the terrorist Mandela to be one of his ‘mentors.’ Another mentor for Obama was the communist Frank Marshall Davis. But I digress. Obama also showered praise on South Africa’s president, Cyril Ramaphosa, who replaced the incredibly corrupt Jacob Zuma. Ramaphosa amassed hundreds of millions of dollars through the ‘Employment Equity Act of 1998″ and the “Broad Based Black Economic Empowerment act of 2003.” Thus empowered, he stole or otherwise took over white businesses. He now enjoys sitting on the board of many white-owned companies in South Africa. In the name of equality, Ramaphosa is become fabulously equal.

Upon taking office, Ramaphosa stated, The expropriation of land without compensation is envisaged as one of the measures that we will use to accelerate the redistribution of land to black South Africans.” He may be coy about its implementation, but even more radical politicians are not. Andile Mngxtama of “Black First, Land First,” said “We are already at war. Everything you (whites) own is ours!”

The black majority rules South Africa now. The African National Congress will change laws to legally enable them so seize land from white farmers and do it without compensation. This will not end well. Russia and Australian have offered to take in some white South African refugees. Curiously, Canada’s Trudeau will not. Maybe he thinks it’s racist to help oppressed white people. Regardless, leaving is a luxury many South African whites do not have, and that’s very ominous as the country devolves into chaos and tyranny. 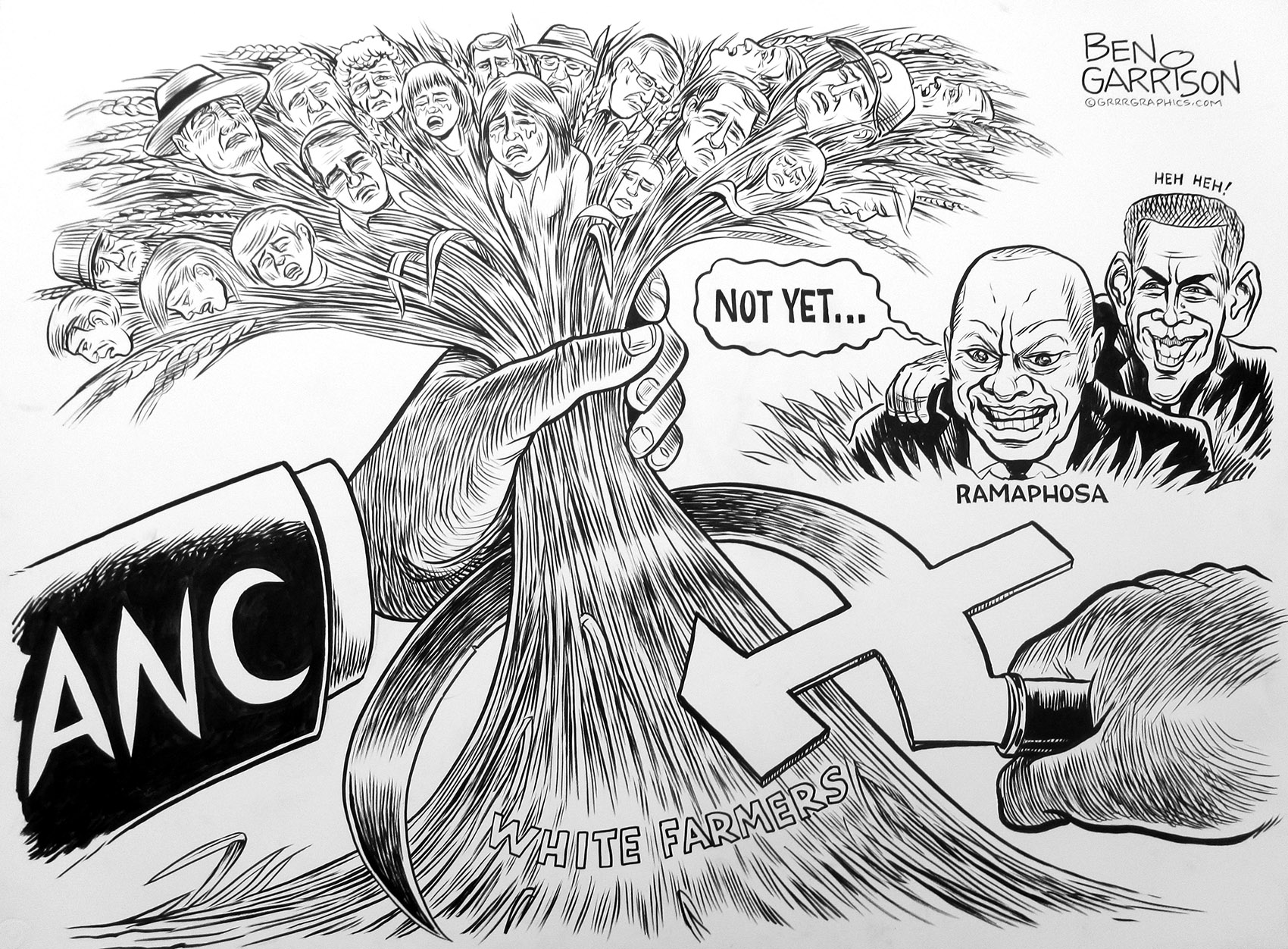 Together, we will expose the Deep State and its lies and bring the truth to every citizen and free our fellow patriots and citizens from the grasp of the globalist agenda and the Main Stream Media’s lies. They threaten our liberties and freedoms, and together we can fight them with knowledge and awareness. With your help, we can fight against those who intend to do us harm, who want to delete us off social media, silence our free speech, and undermine every American value in our country.

It’s time to take the gloves off and fight back, for our country, for our freedoms, for our children.

Your voice is just an important as mine. We will not be censored.

Support our weaponized cartoons- it’s more important than ever.  Thank you.