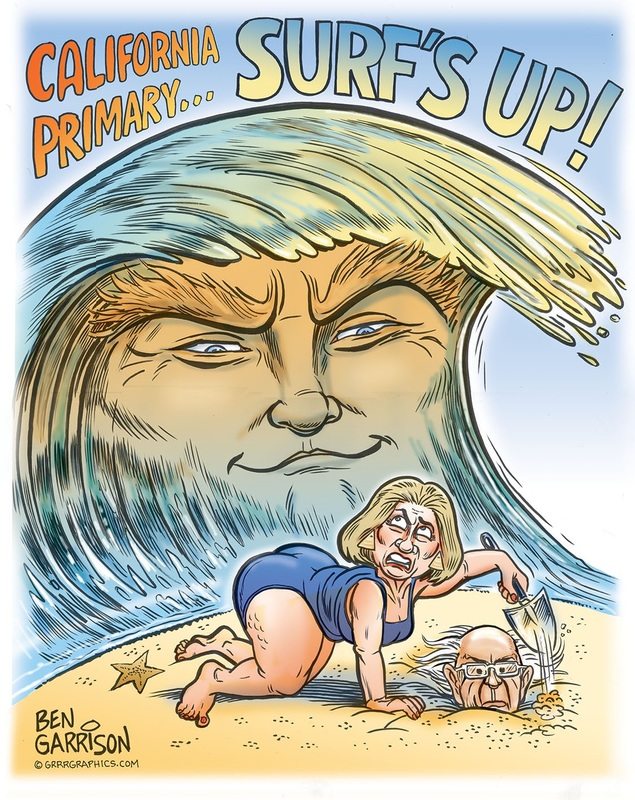 Here is a simple cartoon I dashed out after watching the California primary.

Hillary beat Bernie decisively in California, but the old socialist seems to be ready to hang on. He appeals to younger voters with his cries for ‘social, racial and environmental justice.’ We have something called the Constitution that lays out a framework of justice for citizens. What Bernie keeps talking about sounds expensive, and if he’s referring to support for social justice warriors, no thanks. Their idea of ‘justice’ involves silencing people with whom they disagree. Or getting people fired for saying the wrong thing. This is how communists operate- hence the appeal of Bernie. In his speech last night he talked about continuing the ‘struggle,’ an old communist buzz word. Senator Sanders is correct that corrupt, crony capitalism is running rampant and they are running the government, not the people. However, the creation of more tyranny and taxation isn’t the answer. Again, all we need to do is return to the Constitution.

As for Hillary, it’s all about voting her simply because she’s a woman. It’s ‘historic’ and a ‘proud moment,’ but little mention was made of her complete and utter corruption and criminality. We’re supposed to vote for her simply because it’s about time we had a woman in the White House. I have no objection to a female president, but returning Hillary there is a terrible choice regardless of sex. She spouted her usual platitudes including ‘building bridges’ and ‘breaking down barriers.’ If elected though, you can be sure she’ll be carrying out the bidding of the globalist central bankers, just like Obama has done.

Unlike previous Republican candidates, Trump will pull no punches and he will remind people of Hillary’s lies and crimes. Bernie was a tough challenge for Hillary, but her real fight has just begun.
​
BG