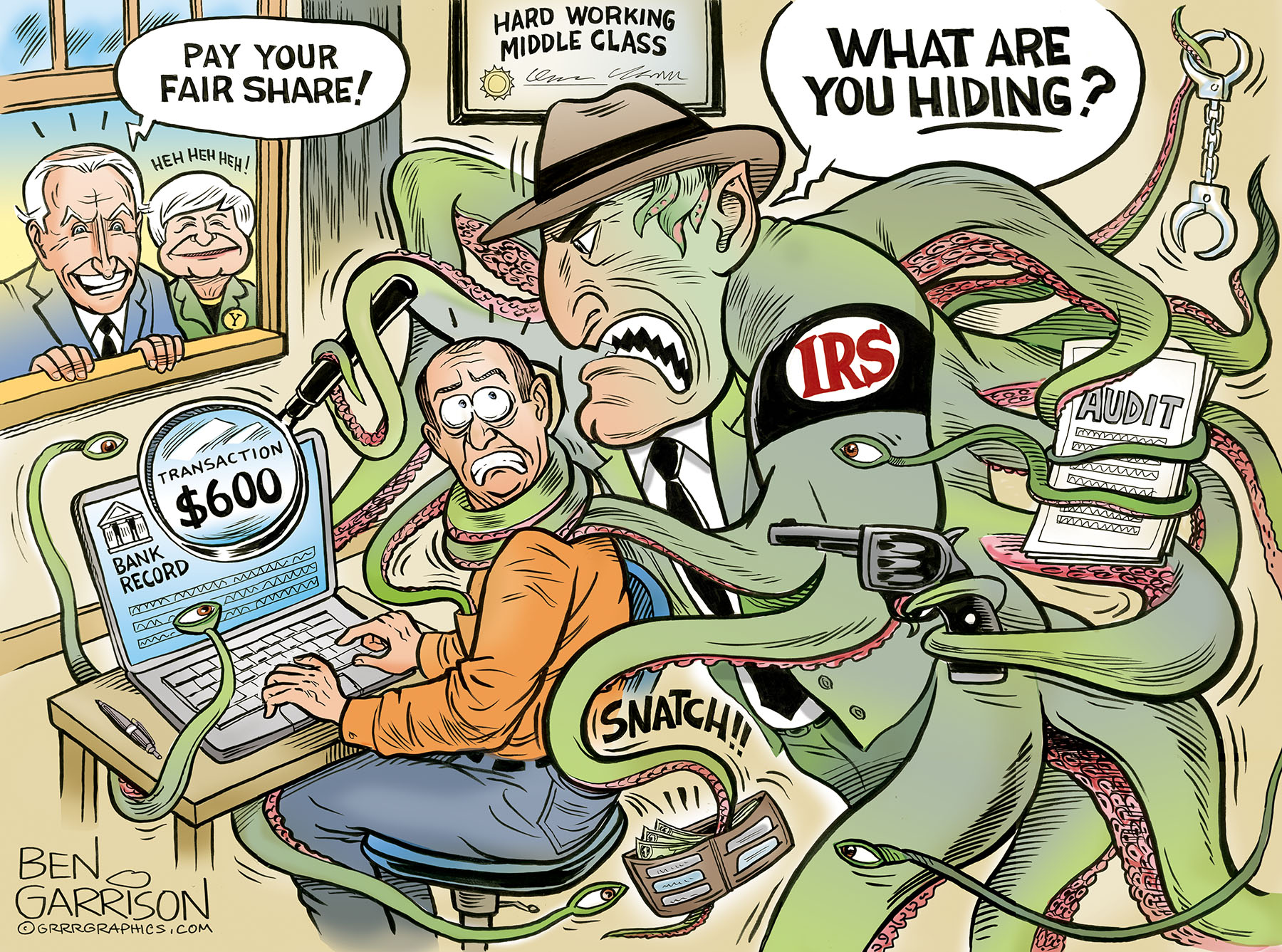 PAY UP OR ELSE

You’ve repeatedly heard Joe Biden talk about getting people to ‘pay their fair share.’ You thought he meant the centi-billionaires, right? Wrong.

They will move their fortunes into offshore trusts and such. They won’t pay. The average citizen will pay. Not only will the super rich pass on any tax hike down to consumers via inflation, they’ll also escape any burden Joe wants to lay on them. The middle class and working poor will end up paying. Those without power always end up getting the shaft.

Biden’s controllers have another bright idea in store for us. He now wants banks to submit reports on any transaction over $600 to the IRS. I remember it started out as $10,000. That way the CIA and their ilk could better control and dominate the drug trade. Then with the arrival of the badly-named Patriot Act, it dropped it down to $3,000. The ostensible goal was to prevent (gasp) money laundering—something that our pork-voting Congress does all the time—with the help of a hopelessly corrupt Federal Reserve.

Joe’s Treasury Secretary Janet Yellen is all for the IRS squeezing the serfs even more. So much for financial privacy. Did you really buy that couch? The IRS wants to know and with their new horde of aggressive and well-paid control freak agents, be prepared to get audited at every turn. Don’t want to pay? You lose your stuff. Resist too much and you could have guns pointed at you. That’s what government is. Force.

Once $600 is accepted, does anyone think it won’t get worse? The Marxists’ ultimate goal is collecting ALL of your money. The IRS will eventually OWN your account outright. They will also own you and your labor. They will take all of your hard-earned deposits and make you pay your ‘fair share’ of taxes. (Fairness being determined by them, of course). The taxes will be be seized first and foremost. Then they will return to you a pittance for survival. Most likely in the form of a digital currency.

I shouldn’t have written “they will return.” No, that’s wrong. They MIGHT return some of your money if you’re being good boys and girls. If you are an anti-vax ’terrorist,’ a ‘climate change denier’ or have a low social credit score, then you will get much less. Can’t afford food and rent? No worries—they will cart you away to a gulag. Marxists love torture and forced labor.

Speaking of Marxists, Joe again bowed to his radical base. He wants to appoint the Soviet Union-born Saule Omarova to the Office of Comptroller of Currency. She’s a Marxist professor at Cornell University. She thinks the Soviet Union had a great system—something the US should aspire too. She hates crypto currency (can’t control it) and wants to have the Federal Reserve take over American’s personal banking. Elizabeth Warren loves her. That’s how bad she is.

Look for Mitch McConnell to get behind all of this.