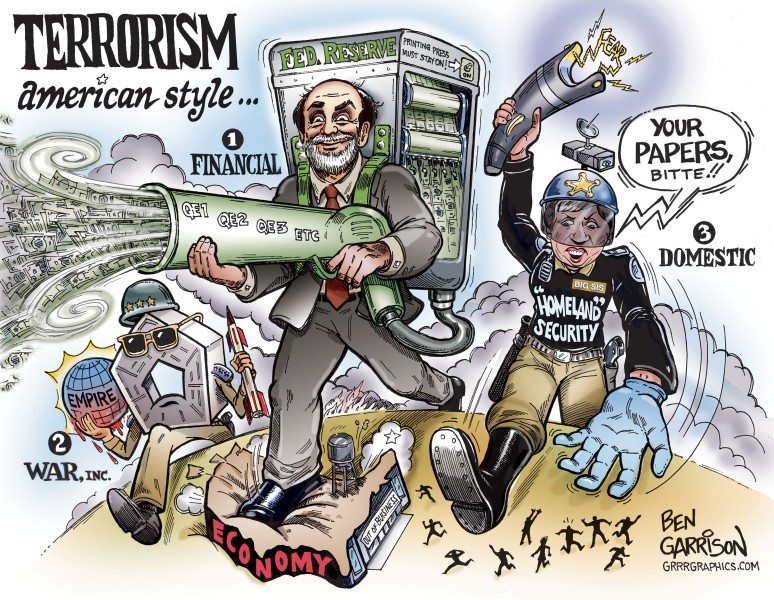 Terrorists aren’t just some men in turbans living on the other side of the globe. They’re right here in America. In fact, they ARE Americans and they come from Washington D.C. Their targets are fellow Americans and inevitably our freedoms get eroded still more as a result. Oh sure, they always tell us it’s for our ‘safety and protection.’ In reality it’s about power and control–as in more for them; less for us. There are many terrorists in our government. I pared them down to what I consider the top three:
1. The Federal Reserve. He’s perhaps the biggest terrorist. In 1913 we allowed private, international banks to gain control over our money. Their system is fundamentally flawed and is now teetering on collapse. And collapse it should. Congress can end the Fed, but Congress is largely bought out by Fed money. Meanwhile, the rich elite bet fabulously wealthy while the rest of us lose our money, our jobs and economic self-determination. The Fed sticks us with inflation, austerity and a tyrannical IRS who takes more and more money through increased taxes ostensibly to pay off a debt that is impossible to pay off. Meanwhile, Ben Bernanke and crew continue with low interest rates and a flood of cash that benefits failing banks at the top. Why not aim that money blower at those at the bottom?
2. War. Inc keeps trying to maintain an empire we can’t afford in both lives and dollars. But since there is money in it for insiders and big defense corporations, we continue to maintain hundreds of bases all over the world. Will the war in Iraq and Afghanistan ever end? Unlikely. Wherever War Inc. sets up shop, it’s there to stay unless defeated. After all, they never left Germany, Japan and Korea. Do we really need hundreds of bases overseas while we can’t seem to summon up the will to defend our own southern border? Ron Paul is right. We must end this crazy idea of empire. We need to stop terrorizing other countries and let them run their own affairs.
3. Domestic terror is on the increase under Janet Napolitano, aka “Big Sis.” The Nanny State‘s nanny, she’s doing our best to keep us all safe. Our president could have ended this nonsense, but Obama refuses to deliver on his promise of “hope and change.” Instead we got hopeless sameness. He did not end the wars. He did not end the insultingly-named “Patriot Act.” He carries on with Bush’s game plan and obeys Wall Street. What a surprise. Government only grows and takes more power until it is stopped. Americans need to push back instead of sheepishly obeying orders. We all know what happened to Germany in the 1930s and early 40s. Are we really going to allow the TSA to aggressively frisk us, our parents and our children? Insiders such as Chertoff got rich from the installation of DNA-scrambling airport scanners. That we pay for! Will we not complain about stepping into these humiliating and harmful naked body chambers? Will we complain when they make us go into camps? Will we really report suspicious behavior at China*Mart? Will we complain when they take our friends and family away? Will we accept the destruction of our Bill of Rights in the name of security?
If we really want to stop terrorism, let’s begin with our own government. We can do this by means of peaceful protest, reason, persuasion, proselytizing and non-compliance whenever possible. If you must be frisked, at least be angry about it and let them know you are angry. It’s time to get mad!
BG
​