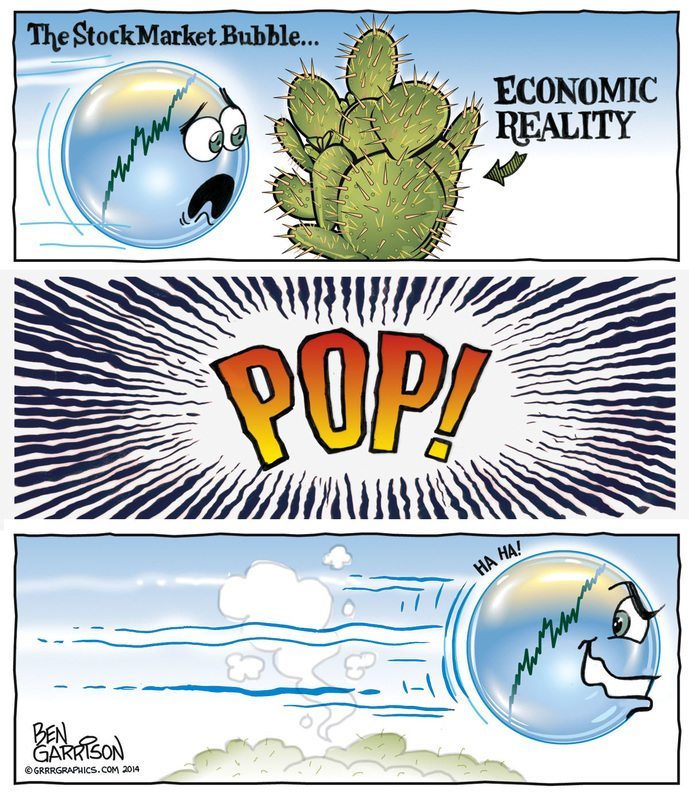 Why doesn’t the stock market crash?

The short answer: There is no longer a free market in America.
Every pullback is met with shouts of ‘buy!’ on CNBC and back up it goes. The market goes up despite the threat of war, a possible epidemic and lackluster performances of major companies (Netflix and Amazon are recent examples). It goes up despite high unemployment, lack of buying by consumers and abysmal housing starts. If an asteroid hits the Earth, would the market then collapse? Probably not.

Everyone knows why. It’s not a big secret. The Federal Reserve keeps things propped up with endless quantitative easing. They may claim they are ‘tapering,’ but that’s just a token. The Fed may talk about raising interest rates ‘down the road,’ but they are posturing. They cannot raise rates. The debt has become so massive that it almost transcends imagination. The debt level is nearing $18 trillion, with unfunded liabilities are $127 trillion (Source: Forbes).

Roughly every taxpayer owes over a million bucks. Raising interest rates would make the debt, which has already gone past the point where it could ever be paid off, unmanageable. Taxes would have to be raised drastically. The middle class and small businesses would, as usual, bear the brunt of that. Many global corporations pay zero in taxes thanks to our thoroughly corrupt system. Small businesses take the brunt. Raising taxes even further would bankrupt many. Many would be pushed to the edge into outright revolt. Maybe we should be revolting already, considering how crooked the IRS has become.

Ending the easy money and raising rates would crash the market. That would hurt those who own most of the stock market–the top 1 percent. After all, most Americans own little or no stocks. The middle class is going away and the poor are forced to accept food stamps in record numbers. Most people can’t afford stocks–especially at bubble prices. The mainstream media are saying the unemployment figures are low and the economy is humming along just fine and dandy. Try telling that to a jobless college graduate burdened with enormous debt. The job figures are cooked by government propaganda ministries. Real unemployment is over 20 percent. Housing starts remain stagnant. Industries have been sent to slave labor overseas. Real wages are stagnant while the cost of food has risen. Too many Americans live paycheck to paycheck and are burdened with credit card debt.