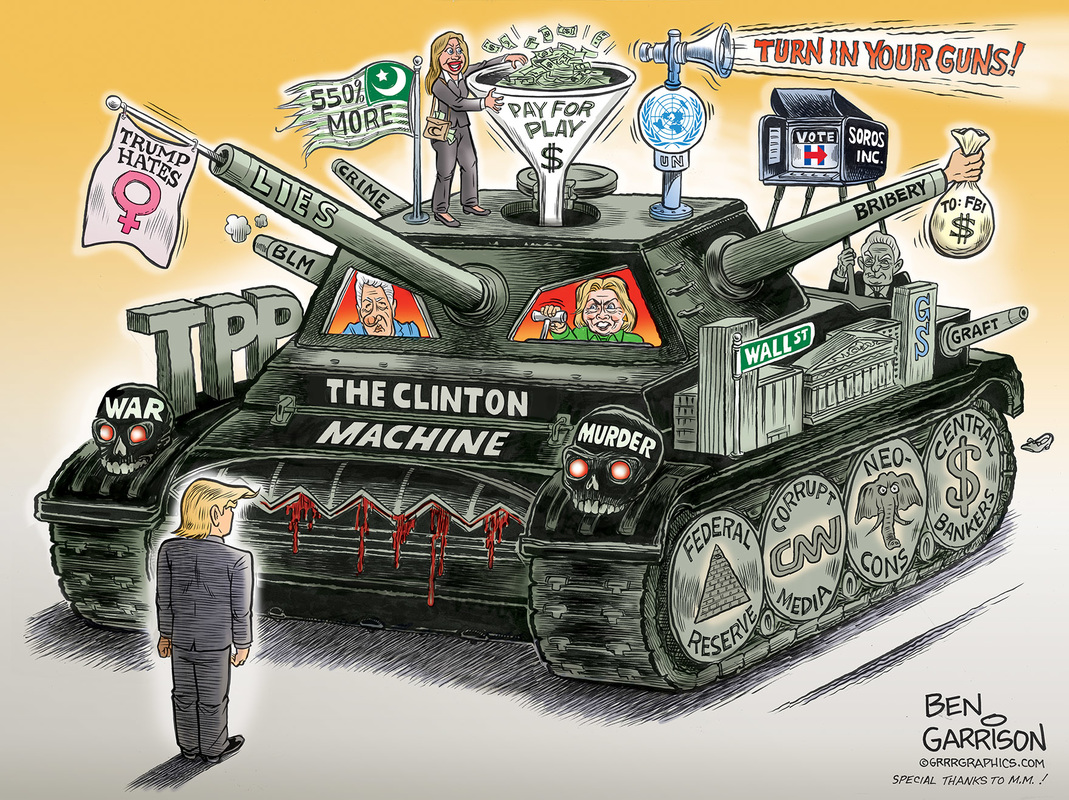 The Clintons are perhaps the most corrupt political family in American history.

The Bushes may be second, but even they maintained a certain decorum in the White House. Neither Bush president would think of cussing out a secret service man or angrily hurl a White House antique at a spouse. The Clintons are at heart common grifters. They’re lying, vulgar confidence tricksters who continue to enjoy pushing the criminal envelope because they’re used to getting away with their crimes. Both should be in prison.

I can almost hear her say, “Ya know, it’s all about the dough—what difference does it make where it comes from?”

In short, the elite back Hillary. Most of them want globalism and open borders for America. They want endless immigration.

Join the Toon Troops on Patron! Early Look at all cartoons and more!

The 10th of 1 percent at the top of the pyramid helps allow The Clinton Machine to continue chugging’ along and doing what it does–breaking the law as a matter of course. Hillary knows she is above the law. Anyone can see the contempt she has for us all—it’s in her eyes. That’s why very few attend her pathetic rallies. Most people know it’s all fake. She’ll say whatever it takes to get elected and then she’ll carry out what she and the elite want.

It may be hard to imagine, but she will be even worse than Obama.

Standing up against The Clinton Machine is Donald Trump. He’s a flawed human being like the rest of us, but at this juncture in history he’s the only one capable of standing up to the Clinton Machine. He gave up his risk-free, lavish lifestyle to take them on. He’s had to face assassination threats as well as a parade of insults and false accusations. Why would he subject himself to the Clinton meat grinder? Because he really does want to make America great again. Right now, he’s the only one who can stand up against The Clinton Machine.

We need to stand up for Trump.

Buy a T-shirt and more at the GrrrGraphics TeeSpring Shop