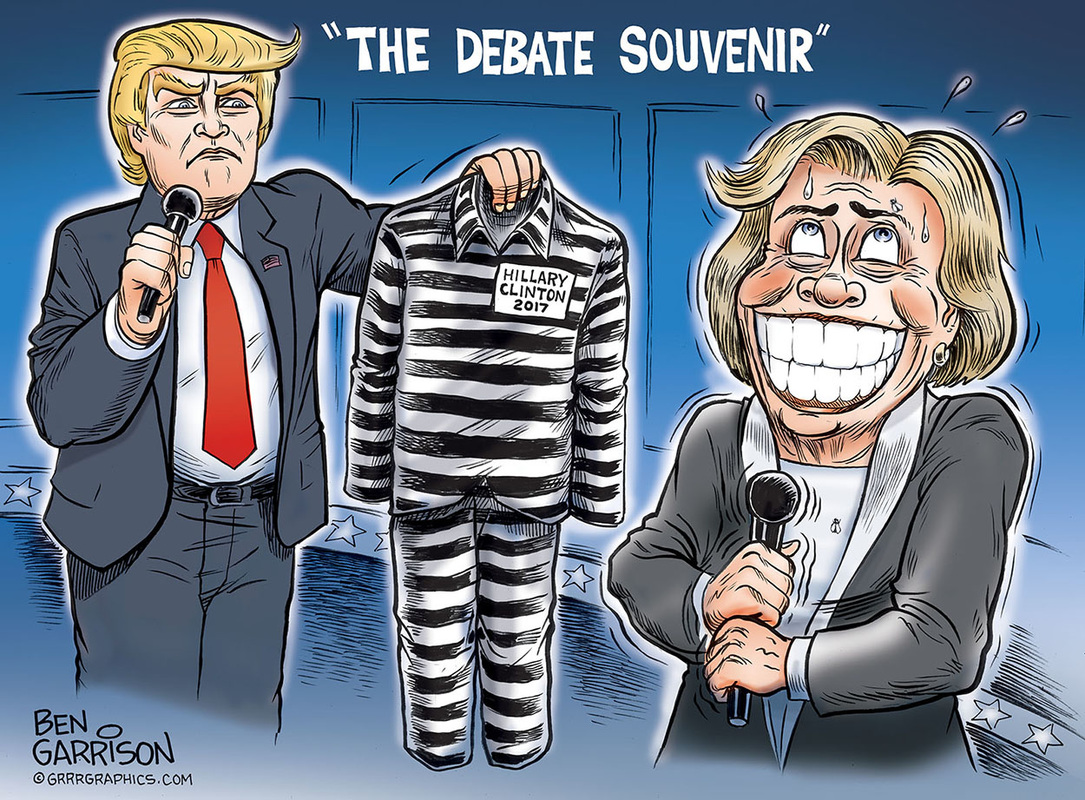 Trump won the debate. He said if he’s elected, he will see to it that Hillary is prosecuted for her private server and her thousands of illegally deleted emails. Hillary responded with a giant, toothy smile. They must teach that to crooked politicians. When someone tells an unpleasant truth to your face, smile! That way you can make it seem as if the attacker is nuts or something. I remember the same tactic was used by John McCain in a debate in which Ron Paul skewered him. McCain beamed a smile as if to say, “Ron Paul is crazy!” A big smile is used to discredit and dismiss legitimate accusations when words cannot. Hillary smiled a lot during last night’s debate.

Hillary needs to go to jail. Someone finally said it to her face! The FBI director certainly didn’t have the nerve. Comey was compromised. He needs to go. Hillary should not be held above the law.

Loretta Lynch, the Attorney General, was also compromised when Clinton boarded her plane to make some sort of deal or threat (which is in and of itself a crime). Obama is also complicit. He knew all about her illegal server. A ‘sorry’ from Hillary about that matter isn’t enough. She has a long history of pushing the envelope on purpose. She must derive some sort of sick thrill from playing Americans for fools. Cattlegate, Filegate, Travelgate, Benghazi, Whitewater, Vince Foster, Haiti and the pay-for-play Clinton Foundation are just some of her other capers. Then there’s her habitual lying. “Sniper fire,” “Named after Sir Edmund Hillary” and ‘You mean with a cloth?” are just a few.

The criminal Clinton dynasty needs to end. Hillary needs to go to jail for her crimes. Bill Clinton may not go to jail, but he deserves it, too. At the very least he needs to be held up for disdain and ridiculed for his rape and sex crimes. Hillary enabled him every step of the way and went after his ‘bimbo’ accusers with a vengeance. The legacy media won’t mention that, though. Instead they would rather focus in on some locker room talk and the “p” word used by Trump. To be sure, it’s not something a man of his age should be saying. It should never have been recorded, either. Compared to the mountain of crimes committed by the Clintons, it truly is a molehill.

Hillary for prison, not president. Lock her up!