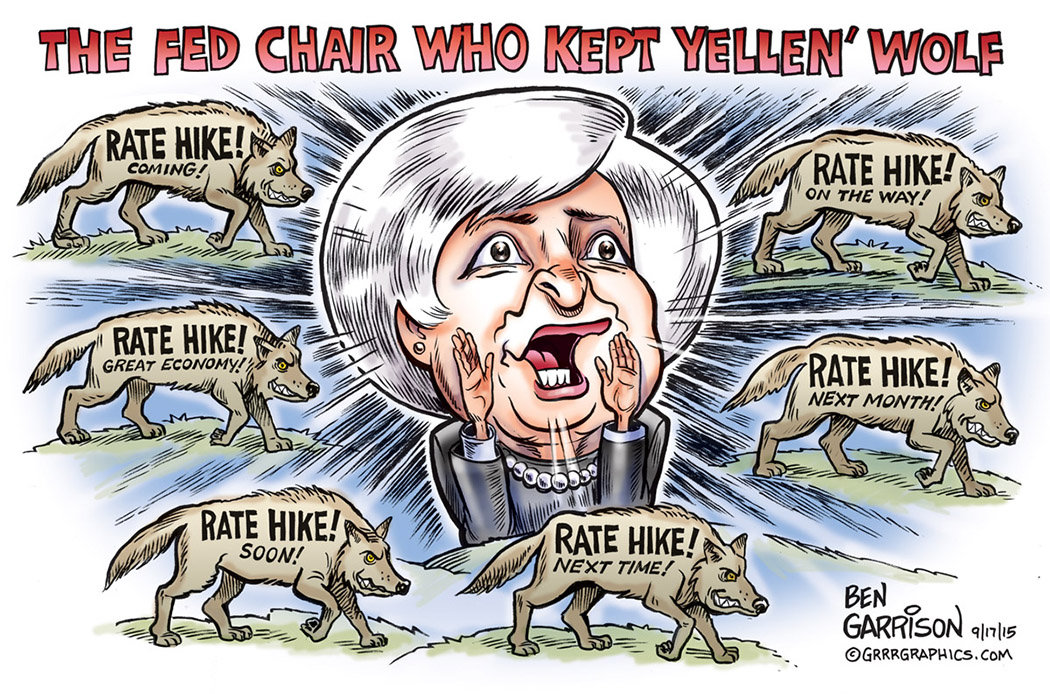 Lew Rockwell writes,
“Once again the Fed’s bite has failed to live up to its bark. Despite months of expectations that it would finally raise rates for the first time since 2006, the Fed continued to sit on its hands while pointing to some unspecified date in the future when all the economic and financial stars will align in a way that makes a 25 basis point increase appropriate. Am I the only one getting bored by the repetition?”
https://www.lewrockwell.com/2015/09/peter-schiff/the-weak-and-utterly-dependent-economy/
No, Lew, you aren’t the only one. I’ve been following their farce for quite a while. The Fed keeps barking about a rate hike wolf, but that’s all it is—barking. If the rate hike cycle DID return, the wolf would blow down the Fed pigs’ house of straw. There’s simply way too much debt built up and rising rates would make that debt worse. It would crash the economy still further.
Savers are desperate to get some kind of return on their money. They get a fraction of a percentage while at the same banks gouge people with an average of 18 percent on their credit cards. The banks create money out of thin air due to fractional reserve banking and the people get the shaft. And before you tell me it’s the peoples’ fault for getting in credit card debt to start with, let me say many can’t find a job and if they can it’s part time and/or close to minimum wage. The under 5% employment the Fed brags about? More smoke and mirrors and data distortion. In other words, they’re lying. The economy is not humming along, or they would have raised interest rates years ago.
A record number of years at zero interest rates has not helped the economy. It has only helped the the super rich get richer. Besides, if things are so rosy as the Fed tells us, why the perpetual ‘emergency’ zero rate position? The Fed continues to lie about economic data to help prop up their market and to pretend they’re ‘in control.’ They’re losing control and they have no more ammo. They have no leverage. They no longer have any credibility. They can’t lower rates without raising them first. They’re pushing on a string. They’re kicking a can down the road. They’re pretending they’ll raise rates while remaining terrified by the prospect. They want to keep their corrupt casino game going for as long as possible. It’s a game that benefits an elite at the top while impoverishing the middle class.
Yellen even talked about sparking inflation. That is clearly against the Federal Reserve Act and when the Fed says its inflation goal is 2 percent annually they’re really saying, “If you save $10,000 today, we want it to be worth $9,800 at the end of the year. The missing $200 is theft. Quoting Karl Deninger, “It is a giant middle finger erected toward every person in this nation and has stolen trillions of dollars of your, my, and everyone else’s money over the last 100 years.”
https://market-ticker.org/akcs-www?post=230679
The Fed’s mandate is to keep money stable. Instead, since the Fed got established just over 100 years ago, they devalued the dollar 98%. They installed a gestapo-IRS to intimidate Americans. The IRS is the real wolf in this situation. The Fed also created booms and busts instead of preventing them. The Fed is an abject failure.
It’s time to end the destructive sham known as the Federal Reserve along with the pernicious IRS. Return the oversight of money to Congress where it belongs. —Ben Garrison
#KeepBenDrawing      Become a fan of GrrrGraphics on Patreon