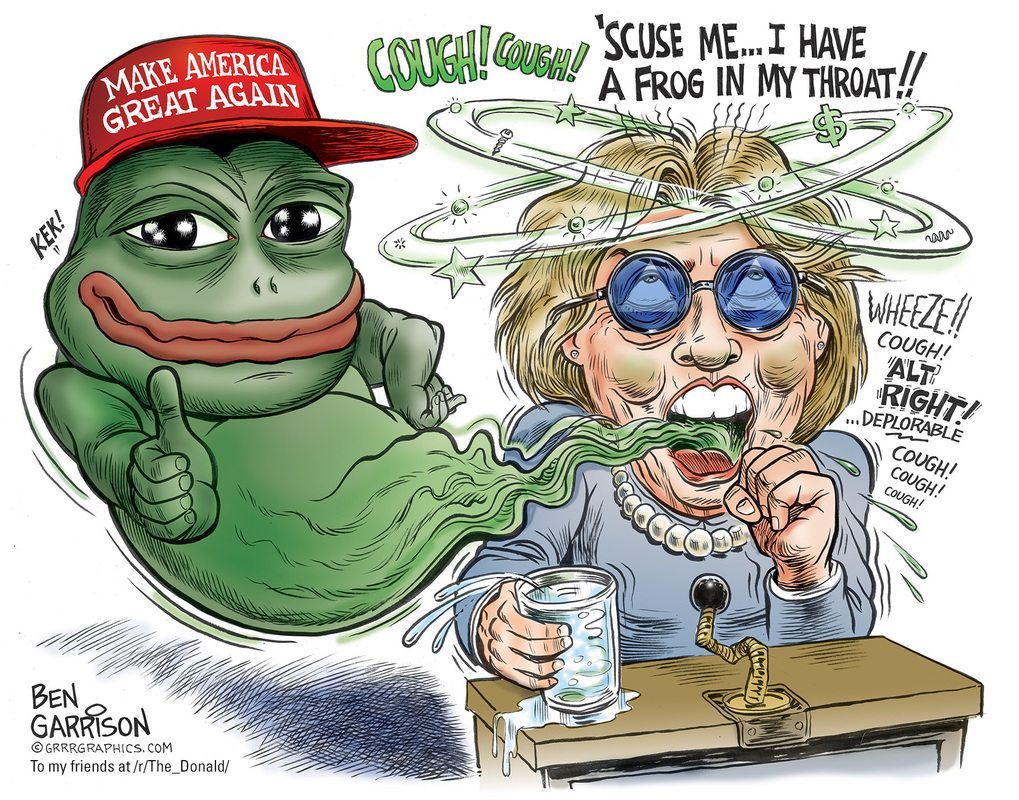 Just when we thought the presidential race couldn’t get any stranger, a cartoon frog named ‘Pepe’ has jumped into the fray. According to Hillary’s site, “important questions have been raised” because Trump’s son posted a spoof image that included his father and the frog.

Pepe first appeared on Internet nearly 10 years ago. He was originally drawn by Matt Furie as a means to express various emotions including, “It feels good man.” From there, he evolved into a meme that was used to highlight political opinions opposed to the establishment in both major parties. Pepe represents satire and laughter and belongs to no particular ideology or party. Young Libertarians, anarchists, conservatives and centrists have all posted images of him.

If anything, Pepe stands as a symbol opposed to cultural Marxism, globalism and political correctness as epitomized by the social justice warrior movement and the corrupt status quo.Pepe was hijacked by Hillary because she’s the very face of establishment corruption. Hillary loves to demonize her opponents. Her mainstream media operatives are losing viewers and narrative control to right-leaning, truth-telling opponents on the Internet. That’s why Hillary must turn Pepe into a deplorable white supremacist ‘alt right’ symbol to be used against Trump, whom she hopes to paint as a nut job.

Hillary and her campaign have failed to realize how memes work. Her attacks will only make Trump and Pepe stronger and she will face even more ridicule and laughter—what young people now call ‘keks.’Hillary remains deeply unpopular among most Americans. She’s a power-hungry congenital liar, a money grubber, a murderer and a corrupt to the marrow traitor. She may also be dying along with her campaign. Pepe could be the final nail in her coffin. She’s desperate and her arguments are weak—hence her resort to name calling. It won’t work.

The 2016 election will be known as the year a major candidate fought against an Internet frog—and lost. Kek.