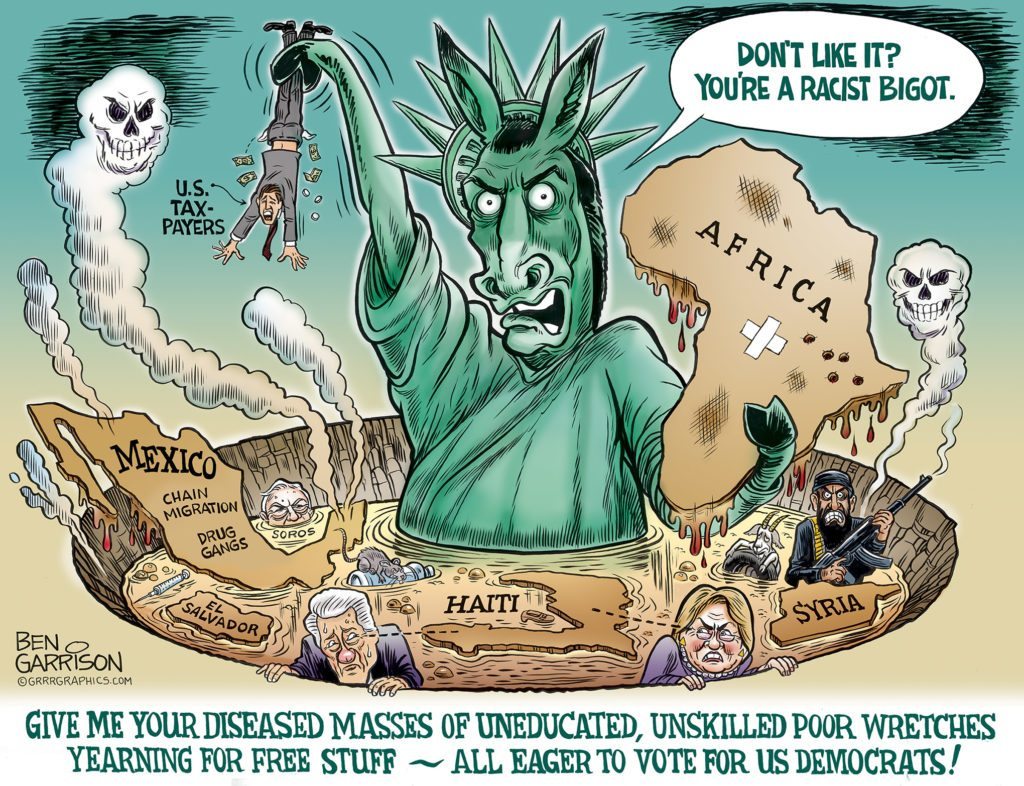 President Donald Trump addressed the 14,000 migrants traveling to the Southern border in a caravan, urging them to go home.

“To those in the Caravan, turn around,” Trump wrote on Twitter. “We are not letting people into the United States illegally.”

The caravan invasion is timed to arrive at the border one day before midterm elections- isn’t that special?

“Give me your tired, your poor,
Your huddled masses yearning to breathe free,
The wretched refuse of your teeming shore.
Send these, the homeless, tempest-tossed, to me:
I lift my lamp beside the golden door.”

These lines appear on a bronze plaque that was installed in 1903 at the base of the Statue of Liberty. Lazarus was a Jewish poet who greatly admired Henry George, an economist who helped spark the progressive era.

It’s an era that brought us the Federal Reserve, the Income Tax, endless foreign wars, myriad social programs, the UN, globalism and the worship of big government.

Support! Every donation goes to the Creation of Weaponized Cartoons help fight for our rights against the Globalists!

Many in the Democrat Party proudly call themselves progressives these days, but their philosophy to me is synonymous with socialism. Why can’t we have the best and brightest coming here? No, Emma wanted the ‘refuse’ instead because she enjoyed playing God and imagined herself ‘helping’ them. She was a moral person who would do anything to obtain the fix of being ‘good.’ It must have given her a warm, inner glow to write what she did and the progressives mades sure her sentiments were set in stone in order to make sure everyone knew how good she was. Her plaque is nothing more than progressive virtue signaling.

It has been said that progressives see people as they want them to be. Conservatives see people for who they are. Progressives in Europe (and many of them in America) have welcomed Muslim immigrants with open arms while thinking, “They’re just like us.” No, they’re not. Their culture is completely different. Islam is not just a religion, it’s a political ideology. Its adherents see it as their duty to dominate unbelievers, which they call pejoratively refer to as ‘kafir.’ Muslims love to exploit the stupid kafir and soak up money from welfare programs while also causing crime rates to spike. Many enjoy raping the kafir women, who are asking for it because they don’t wear burkas. Muslims also create no-go zones. They don’t want to assimilate with the kafir. They insist the latter assimilate into their system instead. They insist upon Sharia Law, not the Magna Carta. We don’t need to import disparate cultures with tyrannical ideologies from violent, failed countries. They are NOT ‘just like us.’

In America, President Eisenhower forcibly deported 1.3 million illegal Mexican immigrants under a program titled ‘Operation Wetback.’ Progressives abhorred this ’shameful’ initiative, but Eisenhower’s job was to enforce the law and he proved that it’s possible to deport a great many illegal aliens. In the late 70’s, Jimmy Carter put his bleeding progressive heart on display for everyone to applaud. In a massive display of progressive virtue signaling, he allowed Cuban refugees to come to America. Fidel Castro promptly and laughingly emptied his prisons onto foolish America. In the 1980s, Ronald Reagan signed a bill that allowed nearly three million illegal aliens to gain legal status. Most were from Mexico. What do you think the result was? Millions more beat a path into America to take jobs and get free stuff.

Currently we have another president who wants to enforce the law. Do we have borders or don’t we? Progressives want open borders. Not only do they want legalization, they insist the illegals should also be able to import their families into America. This is known as ‘chain migration,’ but the progressives object to the word ‘chain,’ because they say it hints of slavery. Maybe they’re right—because the U.S. taxpayer becomes the slave to pay for such mindless, progressive egalitarianism.

President Trump and conservatives want a wall on our border—and the immigration laws enforced. Donald Trump is not a big fan of progressivism or political correctness. It’s a big reason why he was elected. The progressives despise the president and hurl the usual names at him, but words such as ‘racist’ and ‘bigot’ are rapidly losing their effectiveness. Those hurling such insults now come across as silly and desperate. It’s not the job of the United States to help people all over the globe by bringing them into America. The progressive Democrats disagree. They know that the wretches who come here and are given a spate of free stuff will almost certainly vote for Democrats.

Progressivism at its essence is nothing more than juvenile virtue signaling.

That’s all it is. But it’s a dangerous form of virtue signaling. They want to help people all over the world and they want you to know they’re good, moral people who will sacrifice your tax dollars to do it. Yes, they’re volunteering your labor to make it happen—by force! We’re talking slavery here. The utopia-obsessed progressives always use government, their favorite instrument of that force, to rob taxpayers at virtual gunpoint to help others. Big government continually grows larger and more corrupt in order to help solve disease, hunger, poverty and crime all over the world. We send aid via vast sums of money all over the world to help the contemptuous recipients, but somehow the problems never get solved! Haiti has remained a dung hole for centuries, while Japan, Germany and South Korea became economic powerhouses only a few decades after devastating wars completely wiped out everything. Could it be that some cultures are superior to others? No. To progressives, that’s bigotry. They prefer to see all people and cultures as ‘equal.’

Progressivism is a form of insanity because they’re not in tune with reality. They have an ostentatious desire to make everyone safe, well-fed, educated, comfortable, and happy. To make it all happen they want to import endless and massive amounts of wretches from shit holes around the world. Most of them will promptly try to change America into a shit hole.