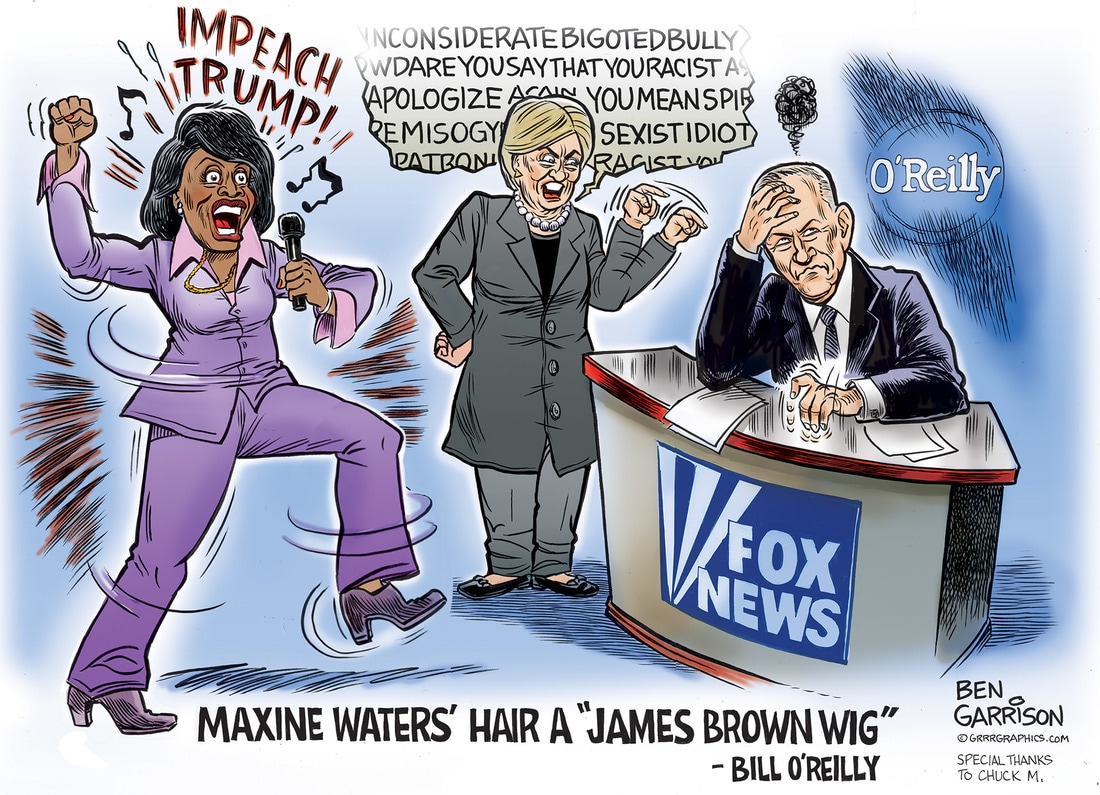 The Left Can’t Take a Joke

Bill O’Reilly said Maxine Waters’ hair looked like a James Brown wig. His was a small quip that should have registered a slight chuckle and then be forgotten. Instead, he faced the usual legacy media firestorm.

CNN pompously declared it ‘an insult that should offend all Americans.’ The Chicago Tribune said the insult was ‘par for O’Reilly’s ignorant course.’ Even though Bill apologized (he shouldn’t have), the SJW crowd angrily cried that he be fired. This is a familiar pattern. It’s always about losing one’s job for saying things deemed politically incorrect these days. It’s the fascism of the left in action.

When I drew a cartoon depicting a mannish Michelle Obama, it sparked an avalanche of outrage. When I drew it, I was more or less a cartoonist working in obscurity. Suddenly I became known because I was a conservative conservative who dared to poke fun at a sacred icon. Only Michelle wasn’t sacred. She was a public figure living lavishly on the public dime. She was forcing kids to eat food they didn’t want. She wasn’t elected to do this—and the joke about her being ‘transgender’ was a common Internet meme. Even Joan Rivers called her a ‘tranny.’ Suddenly the cartoon was seen everywhere. I received hundreds emails expressing anger toward me—and even a few death threats. Again, it’s a pattern among the legacy media. I call it the ‘ain’t it awful game.’ They enjoy getting angry when the perceived transgressor is on the right. The mainstream media welcomes such anger because they know it attracts eyeballs—as long as that anger is directed toward conservatives.

If Whoopi Goldberg made that comment about Maxine’s hair, does anyone seriously think there would be outrage? Of course not. The left would laugh. Even if Bill Maher said it, he’d get a pass. But if a conservative makes a quip mildly critical of physical attribute owned by a lefty, then there’s all sorts of ferocious condemnation. In this manner, the left thus makes themselves immune from ridicule and satire from the right. The right becomes afraid to make jokes and then the left criticizes the right for being incapable of humor. You just can’t win with lefties.

I’ve made fun of Bill O’Reilly myself. I’ve called him “the big leprechaun.” And an angry one at that. Do you think Bill would be offended if he heard me say that? I don’t think so. That’s because the right gets ridiculed by the left all the time. Trump gets it in spades. That’s OK. But poke fun back at the left? Watch out. Especially if the subject is a person ‘of color.’