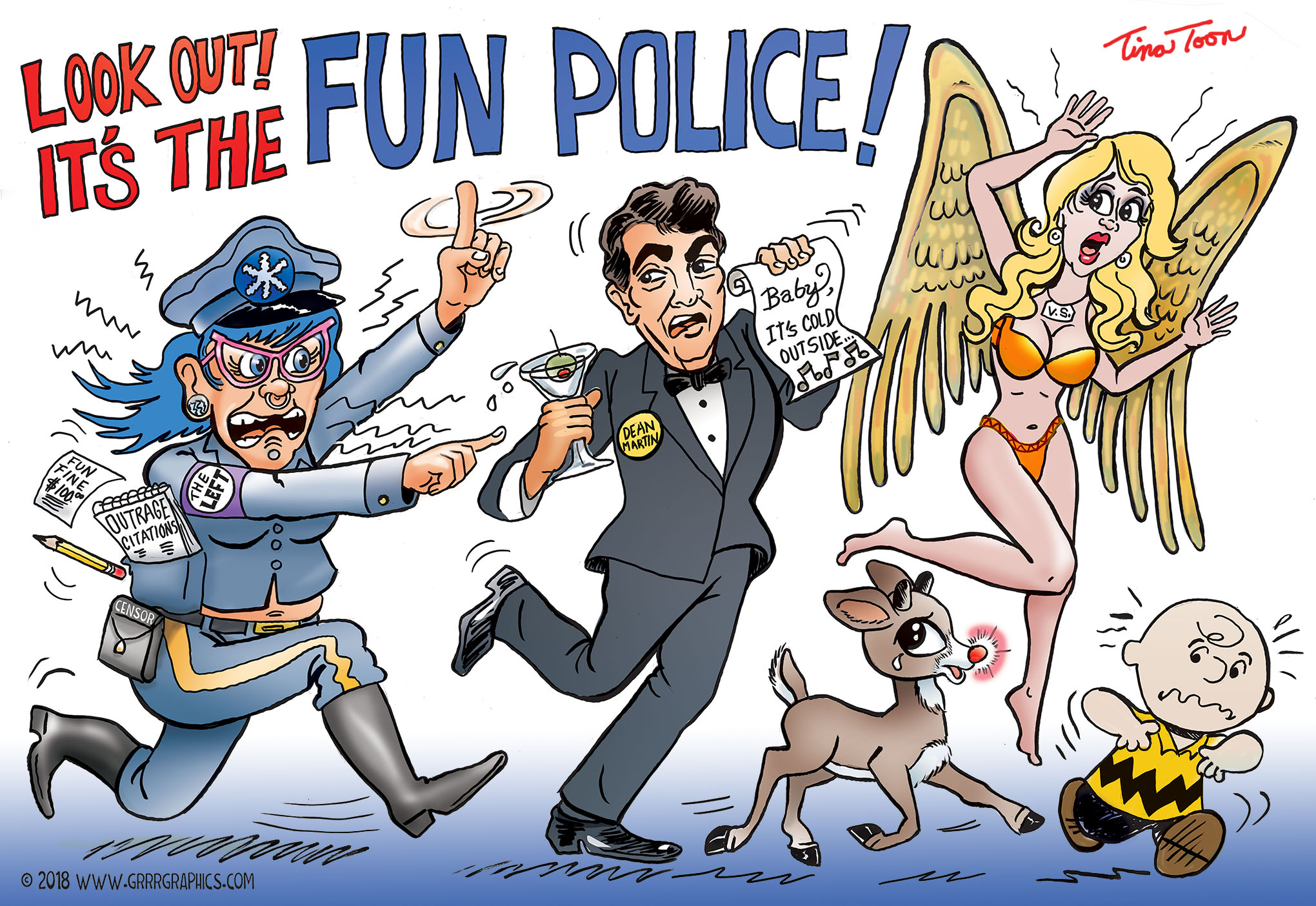 Martin’s version of the suddenly much-buzzed-about 1944 song surges by 70 percent in sales. Billboard

She banned Santa, Candy Canes, and Red and Green items, and of course, Christmas ornaments and reindeer. Principal Sinclair should issue an apology to her teachers and staff, or will she just grunt out, “Bah, Humbug” ?

In the #MeToo era, any remote suggestion of men “taking advantage” of innocent young women must be wiped away from history. “Baby, its Cold Outside,” a classic Christmas song for over 50 years, must be banned from the airwaves! It doesn’t matter that 94% of the radio stations listeners said no to the ban, the radio station caved to the 6% that voted the Christmas song is inappropriate. Outraged feminists and Beta males that make up the 6% can dictate to the majority what they can and cannot listen to at Christmas?

It is a cold and lonely Christmas when the #Metooers are huddled near the space heater with their six cats, drinking wine and eating the pizza for one meal as the resentment against men festers inside them.

If they can’t have fun, then no one deserves to have fun.

Stop in the name of the Fun Police!

Rudolph you are “problematic”, the Fun Police pronounced about “Rudolph, the Red-Nosed Reindeer” the favorite Christmas show of millions of children around the world. Seems Rudolph’s dad was bullying him and Donner was a racist bigot against “red-nosed” reindeer. Presumably this fell in the same category as atrocities committed against Native Americans. Who knew?

No Justice! No Charlie Brown Thanksgiving!

Charlie Brown and the whole gang (including that bigot Snoopy) were accused of  racism against the only black child in the “hood” when he was seated across the table from the gang. The Fun Police claimed this was blatant racism when actually he got the best seat in the house. Where’s Black Lives Matter when you need them?

How Dare You! You are NOT Inclusive!

The Fun Police gave the “Victoria Secret” show, featuring beautiful women dressed as angels in skimpy outfits, an “outrage” citation.  You are NOT Inclusive! Where are the trans gender women/ men/them/ they/it/whatever? Where are the Lesbians? Where are the plus, plus size models? They need representation too!

It comes down to this. Will you continue to let a small minority of nagging scolds ruin your holidays and relationships? Who made them the moral authority in this country and why do companies listen to them and cave in? Because they are LOUD and persistent and the media rewards this behavior because it’s great for clicks and ratings!

America needs to stop rewarding the Fun Police and start mocking them and laughing at their absurd accusations!

We can start now.

Original Tina Toon- now in “Ben” size! Reserve yours today before the Fun Police give us an Outrage Citation! Click to order today 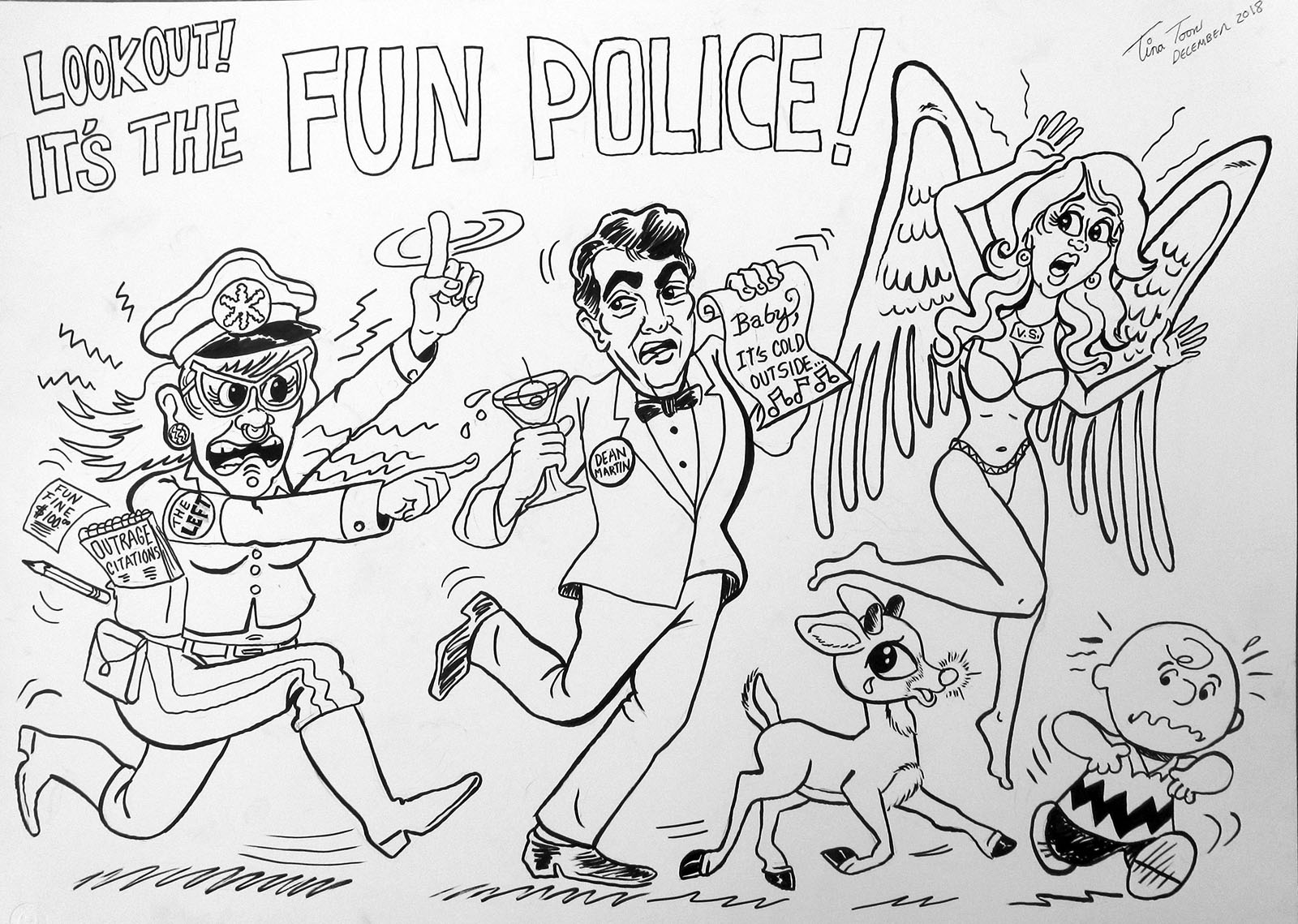