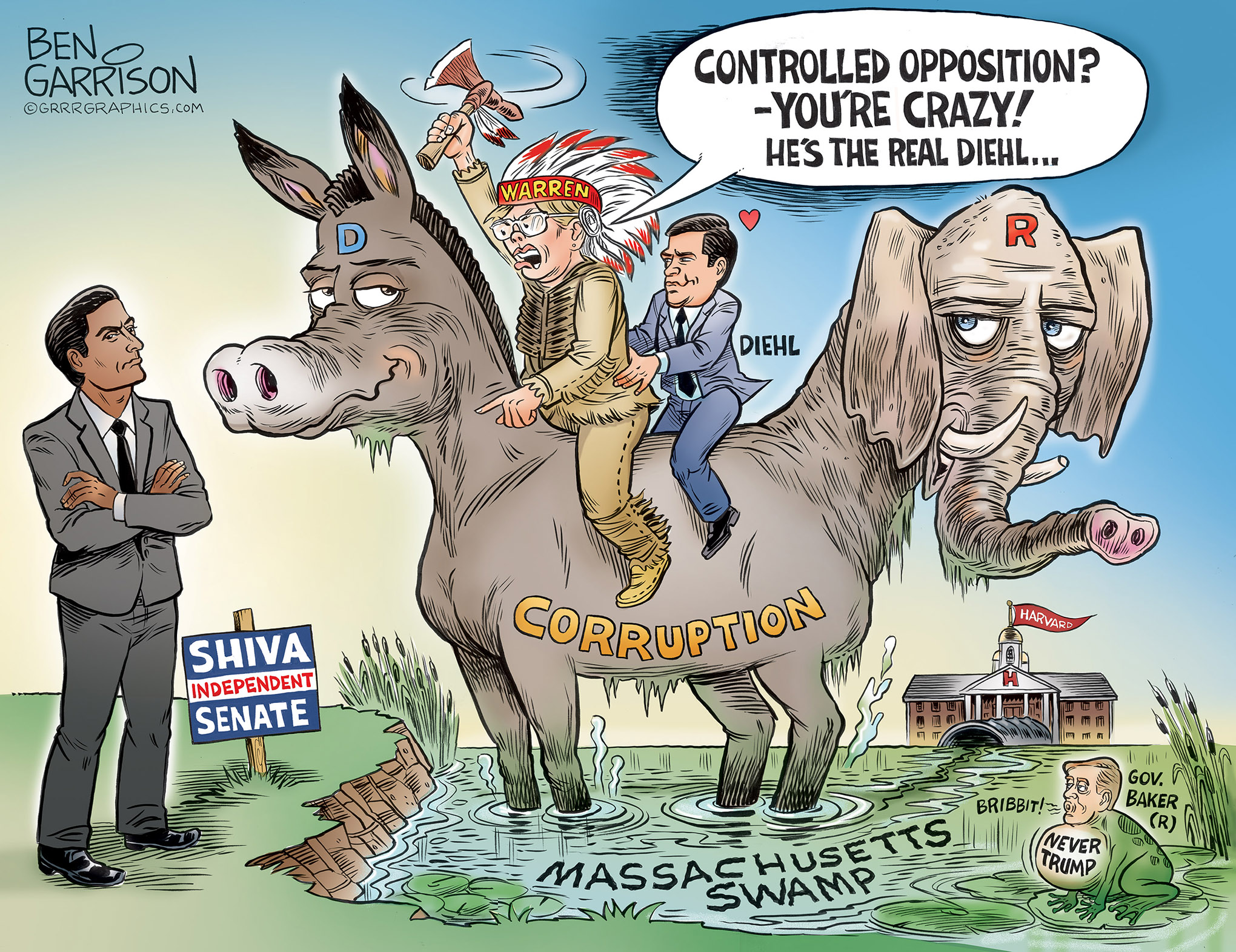 President Trump—support Shiva for Massachusetts senator! He’s an independent who backs MAGA and draining the swamps!—BG

THE REAL COLLUSION. DECLARE YOUR INDEPENDENCE!

Harvard University — the epicenter of the Deep State — is the sewer that feeds the Swamp in Washington, DC. Harvard is the home to Democrat Senator Elizabeth Warren, and from which Massachusetts Republican Never Trumper Governor Charlie Baker is a graduate. In 2016, Charlie Baker, told Republicans NOT TO VOTE FOR TRUMP.  Warren and Baker, the titular heads of the MA Deep State Establishment, have a power-sharing agreement: a Democrat gets to be Senator, while the “Republican” gets to be Governor.

Harvard’s sewer rats have historically architected and “innovated” strategies and tactics of collusion to control people all over the world. One such insidious strategy is the fake two-party divide in American politics, when in fact the two parties collude together to maintain their power — especially when an outsider shows up who threatens their duopoly.

Donald Trump’s victory in 2016 sent shockwaves across the Establishment. They didn’t expect it.  The truth is Trump was neither a Republican nor a Democrat, but Trump.  He cleverly hijacked the Republican Party machinery, and they had no idea what hit them.

Right now, there is a Trump 2.0 underway in Massachusetts, led by Dr. Shiva Ayyadurai.  Everyone should be watching it, to learn and to get prepared, so we don’t get fooled by the Deep State’s latest innovation: the FAKE TRUMPER.

Dr. Shiva Ayyadurai, an inventor-scientist, embodying the American Dream, a legal immigrant, who holds 4 degrees from MIT, including his PhD, who started many high-tech companies creating jobs in MA,  is running as an Independent in the November 2018 election for U.S. Senate in Massachusetts, against Elizabeth Warren.  His candidacy, with his immensely popular slogan, “Only a Real Indian Can Defeat the Fake Indian,” and the Establishment’s reaction provides an incredible opportunity to witness the dynamics of the Deep State’s two-headed animal that wades in the sewer waters of Harvard.

Of the 4.5 million voters in MA, 56% are Independents (unenrolled), 33% Democrats, and 11% Republicans. In 2016, though Hillary got 2 million MA votes, one million MA voters DID vote for Trump!  80% of Trump voters were Independents, and only 20% were Republicans.  The 800,000 who voted for Trump, were not casting their vote for the MA GOP Party, but rather AGAINST the Establishment.

Shiva’s INDEPENDENT campaign is scaring the hell out the MA Establishment of Democrats and Republicans.  Remember, the Senate seat in MA was slotted as a “safe blue” victory for Warren. However, Shiva’s candidacy has put Warren’s projected win into serious question.  In reaction, to the specter of Shiva’s victory, the Deep State, Warren and the Fake News Media of Massachusetts are now executing a two-pronged strategy: 1) Make Shiva invisible, and 2) Promote a Fake Trumper as the controlled opposition to Warren.  The purpose of this is to mislead those 800,000 anti-Establishment voters, back into the fold of the Establishment.

The mainstream media, Warren and the MA GOP are colluding right now to keep Shiva off the debate stage! Shiva got on the ballot legally.  He and his volunteers got nearly 20,000 signatures, though only 10,000 were required.  There are three candidates on the ballot, but only two get to be on the debate stage. Shiva has filed a lawsuit as well as a preliminary injunction against University of Massachusetts, the co-sponsor of at least three of those debates in federal court. Shiva’s father staged a sit in, a few days ago in Warren’s office to demand his son be allowed on the stage.  His father said, “I thought I left corruption behind in India.  There are three candidates on the ballot, why are only wo allowed on the debate stage?  This is pure injustice.”

Who is this other candidate — the supposed “opposition” to Warren?

He is known among REAL TRUMPERS as Geoff “Dirty” Diehl. Dirty Diehl and Warren share a lot in common.  In 1995, both switched parties. Warren went from Republican to Democrat, the year she got her job at Harvard. Dirty Diehl switched from Democrat to Republican. Dirty Diehl voted for for Joe Biden and John Kerry.  And, like Warren, Dirty Diehl lies a lot of what he is, when he is isn’t — and the mainstream liberal media supports his lies, because they want the controlled opposition to ensure Warren’s victory against Shiva.

Last year, forensic experts exposed how Dirty Diehl did a botched up photoshop picture, to lie that he shook hands with the Trump, when, in fact, Trump gave him a finger poke, and did not want to shake his hands. There are three hands of Trump in the picture.   The mainstream media has colluded with Dirty Diehl to print, over and over again, that he was the MA for Trump Chairman.  This is the BIG LIE.  There was only one Chairman of the MA Trump campaign: Vincent DeVito.  In spite of repeated communications to the mainstream media, they continue to repeat the BIG LIE to create a FAKE TRUMPER to mislead the true Trump Loyalists back into Establishment.

What’s truly abominable is that Dirty Diehl’s campaign manager is a Saudi Lobbyist, who worked for Saudi Arabia to mislead veterans to lobby against a bill in congress, which passed nearly unanimously to allow 9-11 families to sue Saudia Arabia in US FEDERAL COURT!

Prior to the MA Republican Convention in April 2018, Dirty Diehl did not endorse the Never Trumper Charlie Baker, in order to mislead Trump loyalists to get majority delegate votes to win.  But, immediately AFTER the April 2018 convention, guess what?  Diehl endorsed Baker — a fact that mainstream media again tries to keep off the headlines.  Dirty Diehl is the “boy toy” of Warren and Baker.

The REAL Trumpers who know about this are waking up, and Warren and the media are working hard to keep the cover up going. This is why Dirty Diehl is holding on for dear life to Warren in the picture, as the sewer frog Baker looks on. Warren needs Diehl to mislead voters away from Shiva, and Diehl needs Warren for his political future,

The dynamics of corruption in MA provide all of us an opportunity to wake up. Declare Your Independence!