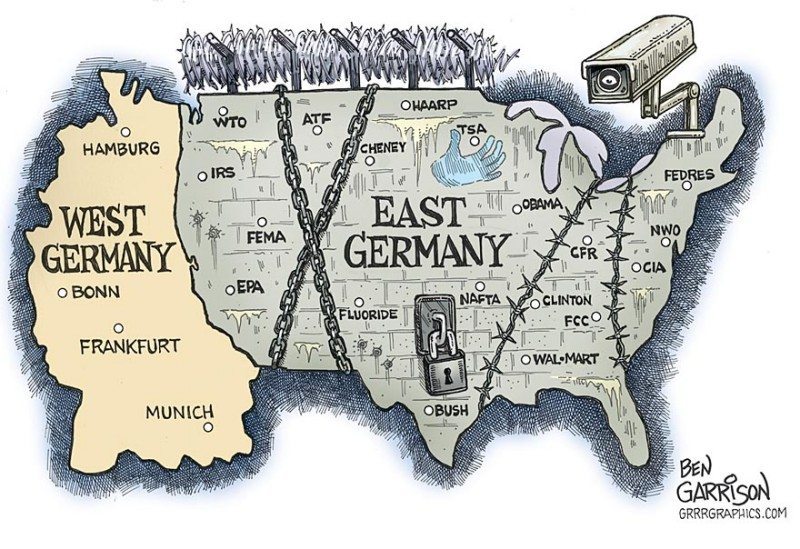 For you young people out there…yes, there was once an East and West Germany. My own son (currently in college) didn’t know this. A lot of history that my generation grew up learning was never taught at his high school. They instead concentrated on how bad our founding fathers were. After all, they had slaves. He was told Andrew Jackson was a war criminal–not that he doggedly kicked out the central bankers (Woodrow Wilson all-too easily let them back in). My son learned little about the positive aspects of American history. Freedom and liberty were not emphasized. Instead he learned about multiculturalism and diversity and the need to respect and obey government. Anyway, I had to explain to him that yes, Germany was indeed divided into sectors after World War II, and soon the Soviet Union erected a great wall–an “Iron Curtain,” as Churchill dubbed it. It was built to stop citizens from escaping into the west.
In East Germany, fear was omnipresent. Citizens endured checkpoints. They were terrified that they might be sent to camps. Right after the war, women were raped by soldiers and ‘authorities’ in power. One could not speak out against government. Citizens were compelled to obey the state–or else. Elections were fixed. Industries were dismantled and sent out of the country and what was left was nationalized–‘owned’ by the government. Markets were rigged. The Stasi secret police were everywhere. They gathered information which was used by the state to keep people in line.
To be sure, it’s not that bad here. Yet. Still, Americans are now told to report each other at Wal*Mart. We are barked at to fasten our seat belts and remove our shoes. Our markets are rigged. Our industries have largely been sent overseas. We’re spied upon by a growing number of cams. Our cell phones can be tapped to prevent domestic ‘terrorism.’ Ticket-spewing traffic cameras are everywhere. We must report every last dollar to the IRS while Bernanke tells Congress it’s none of our business where he spends our trillions. He says it’s for our own good. We don’t want to crash the economy, right?
We The People must make sure we don’t devolve into a police state such as East Germany. And yet we see the TSA is frying and groping citizens at airports–and now at sports stadiums. The TSA is growing and not answerable to the Constitution. Our government uses fear to cow us into giving up rights. They say it’s for our own good. It’s all about keeping us ‘safe.’ Balderdash. It’s about keeping the government safe.
Government never grows smaller. Like a shark must keep moving to breathe, government must keep growing to thrive. Getting bigger is what government does. We must be vigilant about giving up more rights and privacy to the government. WE MUST END THE ‘PATRIOT’ ACT. It’s for our own good.