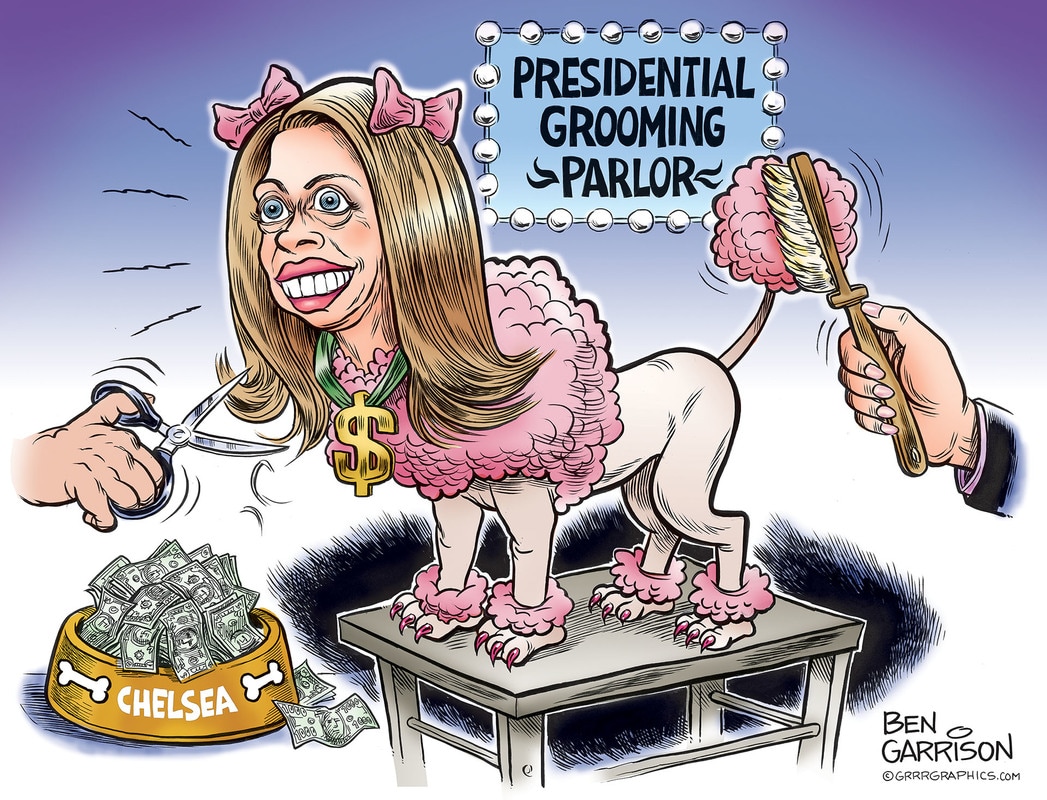 UPDATE: Chelsea Clinton attacks President Trump, says “Trump degrades what it means to be American” (Did Mom write that for you?)

Hillary Clinton stated “I take absolute responsibility” for her election loss. She promptly went on to blame James Comey, Russian ‘WikiLeak’ hackers and misogyny. Hillary expected to win automatically. After all, she outspent Trump two to one. Trump however, out-campaigned her by the same ratio. Trump appeared robust and tireless while Hillary was apparently out sick, coasting or resting. The rust belt wanted jobs, not a repeat of the empty hope and change promises previously delivered by Obama. They were ready for real change. Hillary was the status quo candidate of the central bankers. So was Obama. Trump stood out as a populist outsider with a more compelling vision of America—and he won.
Click to Donate Help Unleash Red Wave Cartoons
WikiLeaks exposed Hillary as an operative working for the banking elite, the CFR and the deep state Illuminati. She lacked charisma, health, ethics and a convincing back story. Instead, she relied on slogans and platitudes that rang hollow. It’s time for the Clintons to go away for good, but they have owned and corrupted the Democratic party for so long that they have now become the Democrat party. Without them, who else is there? Elizabeth Warren? That could possibly explain why the Clintons, who grew fantastically rich through their political graft are now promoting their daughter. Chelsea has recently received a great many positive mentions and news stories from the bought-out mainstream media. Hillary is grooming her for office. First, the Clintons will pay for a congressional seat even though Chelsea is not qualified. Then, after a term or two, she’ll probably run for a short stint in the Senate. After that, the presidency.Hillary ran a dog of a campaign. No amount of grooming and money will help her daughter succeed where her mother failed. America has had enough of the Clinton and Bush dynasties.
—Ben Garrison

Support New Media and Ben Garrison Cartoons on Patreon! Help take a “Bite out of Tyranny”