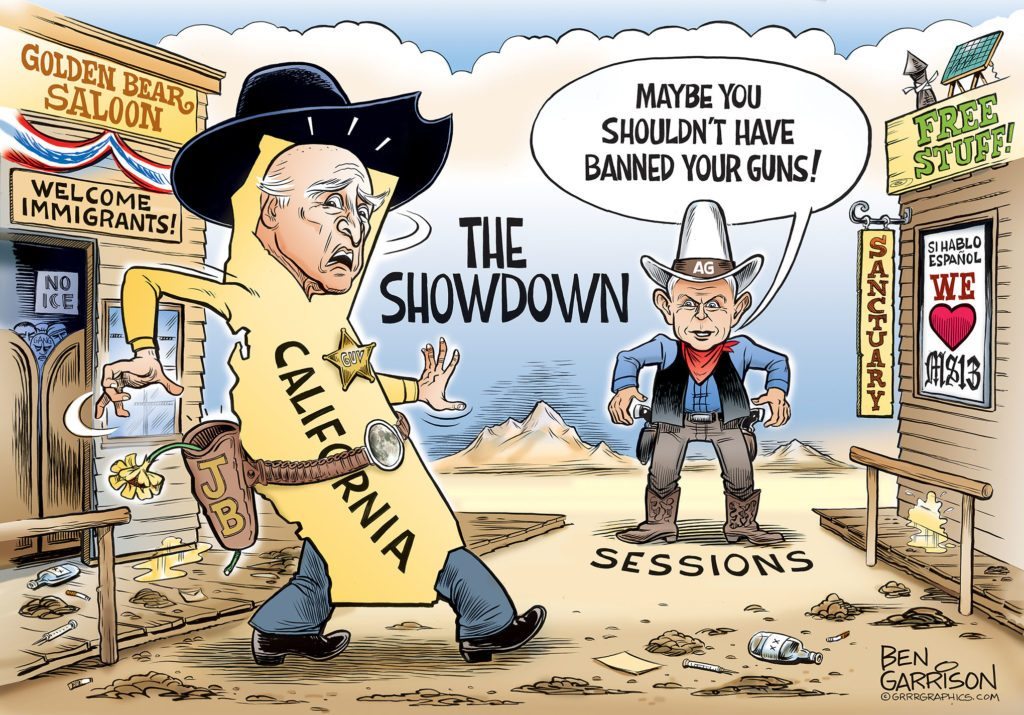 He intends to stop California’s open border policy. Not only is Governor “Moonbeam” Jerry Brown not enforcing our immigration laws, he and other lefty loons have actively been trying to suppress enforcement. This was apparently enough to snap Sessions out of his slumber. What will happen next could involve a long legal showdown, but for cartoon purposes I’ve boiled it down to a gun battle, and Brown lacks the firepower.

Sure, I know guns are still legal in California, but Brown has been doing is best to trample the 2nd Amendment and pass all the anti-gun legislation possible. Soon we may see cities in California begin seizing firearms illegally and against our Constitution just like they’re doing right now in Seattle. Taking away guns based on someone’s looks? That’s the very acme of tyranny.

Brown claims the 10th Amendment (funny how the progressives cite the Bill of Rights only when it suits them) enables his state to leave its border wide open. I do believe in states’ rights. They should be allowed to make their own decisions on issues such as marijuana. The ‘federal government’ (an ugly combo of words) should keep their fat fingers off individual liberty whenever possible, but the Constitution also states the federal government has a duty to protect citizens from foreign invasion.

California’s cities are bastions of the leftist, virtual signaling, egalitarian mindset. They want everyone and anyone in the world to come here and get free stuff, including education, health care, welfare and driver licenses (forget insurance—that’s for the sheep). Then the invaders are free to go anywhere else in the country as well and soak up taxpayer money.

This is why Sessions must go in and clean up the state of California.