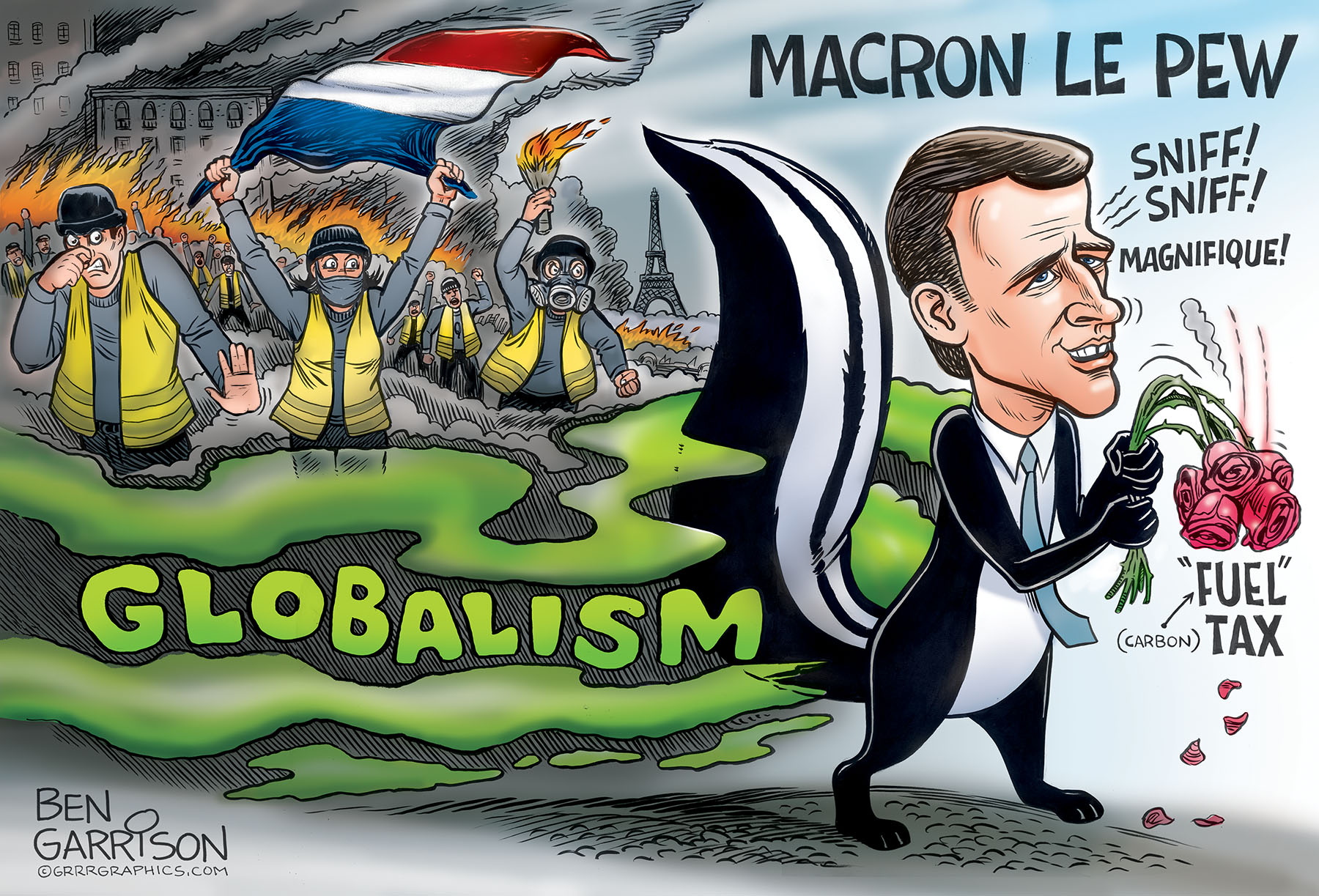 Update December 7th, 2018  Macron caves and removes “gas tax” Protests go on. This is bigger than a “gas tax”

The French government expects the Gilets Jaunes (Yellow Vest) protests in Paris this weekend could be more violent than ever, despite President Emmanuel Macron buckling on fuel tax hikes.

The Élysée Palace, seat of President Emmanuel Macron, announced to French media they are expecting “great violence” on Saturday as Yellow Vest protestors have announced “Act IV” of their nearly four-week-long protest against the Macron regime that was initially sparked by a rise in fuel taxes, franceinfo reports.

According to the Élysée, they expect “a hard core of several thousand people” to arrive in Paris on Saturday with the intent to “break and kill.”  Breitbart

French president Emmanuel Macron is not a very popular man in Paris these days. He represents the globalist bankers more than France, and he’s been running their game plan.

Macron put in place a ‘fuel tax,’ which is in actuality a carbon tax. Such a tax is instrumental in the further fleecing of the sheep by the EU globalists. People are supposed to be shamed into happily paying such a tax in order to ‘save the environment. Maybe Macron thought people would be eager to further fill the coffers of big banks and corporations in order to make this happen. Otherwise, he would have been cleverer about it by lying and saying it was to help the French people in general.

The French are already over-taxed. Workers there must shoulder the burden of their own quasi-socialist, immigrant-packed country. Those who drive to work are now forced to pay more for their already ridiculously high-priced fuel. Those who drive for a living are forced to pay a lot more. Macron’s fuel tax may be the straw that’s breaking the camel’s back. It has sparked huge, fire-filled protests in Paris. Macron’s response? He dug in his French heels and denounced the protestors. He’s not listening to citizens who are sick of being turned into slaves for his globalism. His lack of sympathy has made things worse for himself. Now there are tens of thousands more ‘gilets jaunes,’ or yellow vests talking about revolution. They’re ready to remove Macron’s head from his globalist body. The French have been known to take their contemptuous masters down by violent means on occasion.

Macron’s tax to fight ‘climate change’ is based on fraud. Besides, the globalist bankers could easily fund such a thing themselves if they wanted to. They have trillions of dollars and Euros at their disposal, but that’s not what this is really about. What it’s really about is bringing globalism completely out in the open. Macron recently stated, “Nationalism is the exact opposite of patriotism.” He implied that nationalism was immoral and a ‘betrayal’ of patriotism. The EU wants to erase borders and even come up with a European army. 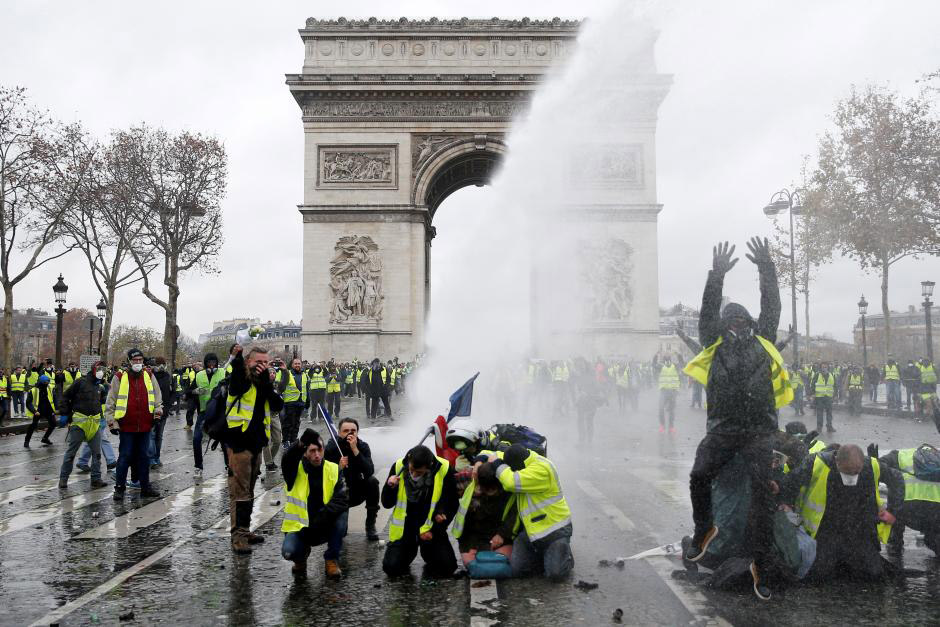 Macron is a Rothschild man. What is he and his central banker globalist buddies really up to? Well, no good as usual. They’re playing on people’s sense of egalitarianism. You don’t want to help others? Mon Dieu! You are immoral! We must help every single person in the world no matter where they are from. We must bring them here and feed, house, and educate them all for free! If you disagree, you’re a bad human being!

Macon and the elite want an end to nationalism. Instead, they want a socialist utopia, guided by wise masters—themselves. They want make ’their’ world into a garden that they can exclusively enjoy, while crowding the rabble into cities where they can be brainwashed and eventually destroyed—for the good of the ‘planet.’

There’s nothing wrong with nationalism. People have a right to keep what they earn through hard work. They have a right to feed and help their own families first and their neighbors and country after that. They don’t want to send taxes to faceless, gray bureaucrats in Brussels, where it’s distributed to mafia-like cronies and more politicians sent out to promote more globalism and more taxes. People are fed up. They don’t want to be slave to globalist bankers! 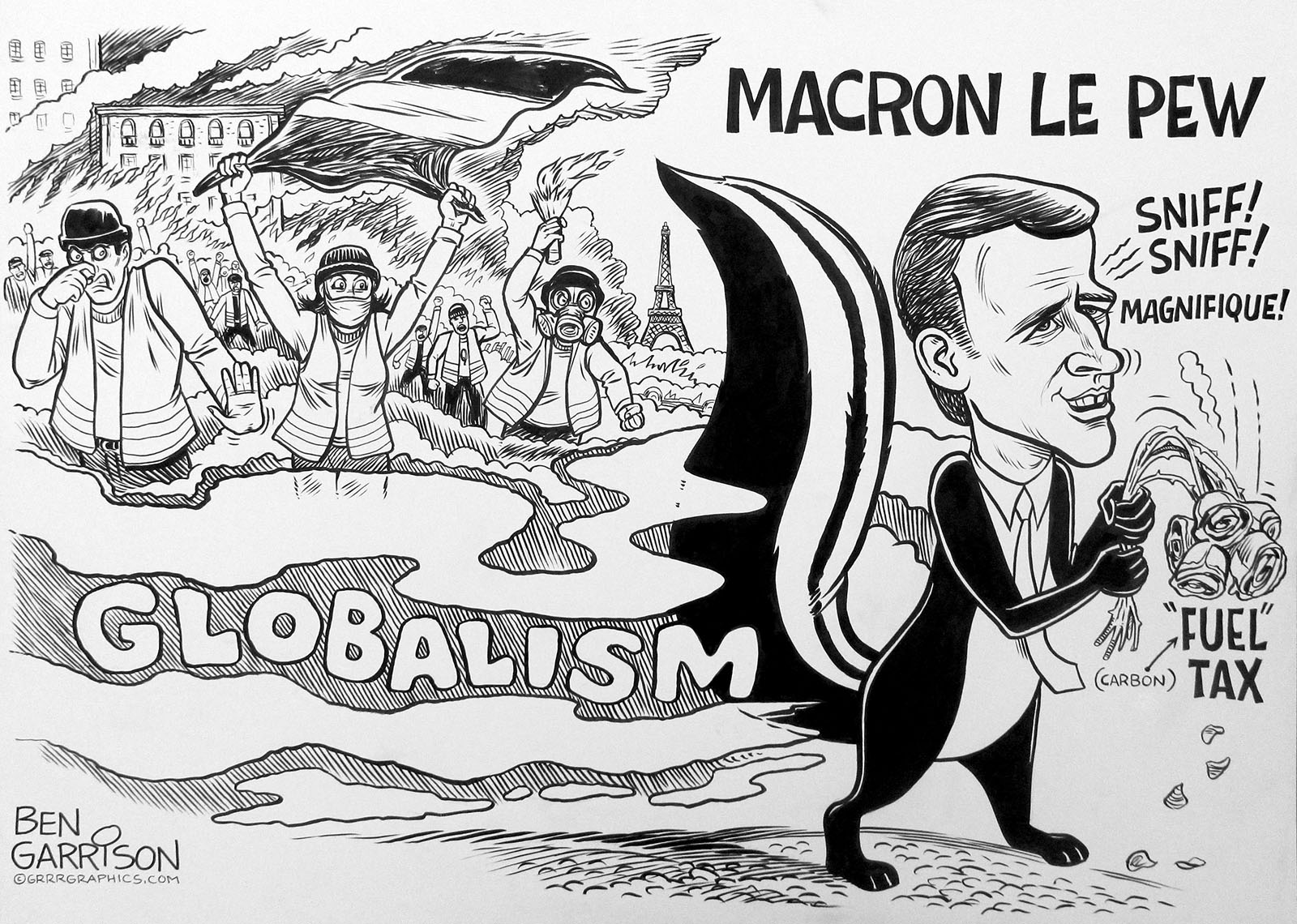 THE GARRISON is now Live – Join Ben at Cartoon Headquarters! See you at THE GARRISON- an online Community for MAGA Patriots!
Start Your 14 day Free Trial Today!