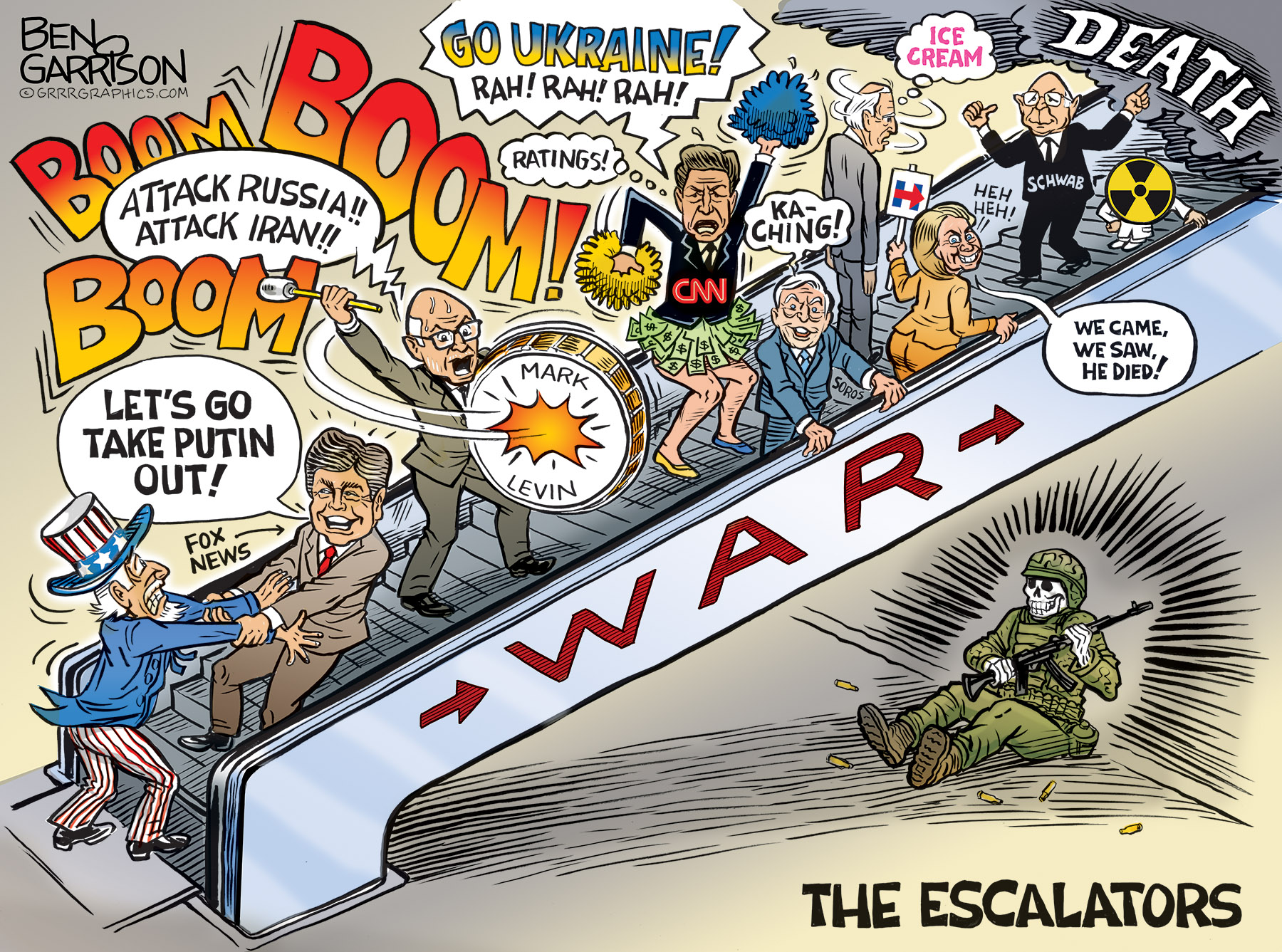 It’s time to de-escalate the escalators.

We know the propaganda generated by corporate media is scripted by the globalist oligarchy and CIA.

For nearly two years the over-paid talking heads told us the mRNA vaccines were ‘safe and effective’ when they were anything but. Those who refused the vaccines were vilified and demonized as ‘anti-vaxxers’ who were ‘anti-science.’ Free speech was destroyed. Vaccine passports were deployed. It turned out the vaccines were far more dangerous than Covid-19 and its variants. The mainstream media are liars. Why would we think they’re not lying about the war in Ukraine? None of their war propaganda can be trusted.

Fox News and CNN want us to believe that Putin attacked because he wants to restore the old Soviet Union. They keep telling us he’s mentally imbalanced. In reality, he was provoked by war mongering politicians in the west. The legacy media are cheerleading the war. Those who want to adhere to the advice of our founding fathers and avoid foreign entanglements are now being demonized as ‘isolationists.’

The simple truth is Putin didn’t want Ukraine to become part of NATO. His was a reasonable request that was contemptuously spit upon by the likes of Biden.

Thanks to Obama funding a regime change, Ukraine became a haven for kickbacks, corruption, and money laundering.

Hunter Biden raked in millions of dollars in graft and so did relatives of many corrupt US politicians. There were seven bioweapons labs near Ukraine’s border. Russia naturally saw those as a threat and destroyed them. Our government then scrubbed their existence from the Internet.There’s no reason to push an expanding NATO empire onto the doorstep of Russia. In fact, when the Soviet Union fell, the archaic NATO should have fallen along with it. Let everyone fund their own defense and mind their own business. Remember, WWI began due to complex alliances and entangling agreements. That war was illogical and WWIII will be the same if we allow ourselves to be talked into it.

Ukraine isn’t worth nuclear war. In this instance America should mind its own business. Many multi-millionaire media personalities disagree with me, of course. Sean Hannity, for example. He proposed sending NATO fighter jets to bomb the Russian convoy, but do it anonymously so Putin wouldn’t know who did it. Not content to leave that bit of moronic strategy on the table, Hannity also proposed to take out the Russian leader. “Cut off the head of the snake,” as he put it. Sean is warmonger.

Other war escalators include his regular guest, Mark Levin, who is loudly beating his war drum these days. Like Sean, Mark is fabulously rich. You can bet that neither of them will go to Ukraine and fight for ‘Democracy’ there. Their weapons are their tongues, which they enjoy wagging. Their allies include George Soros and Klaus Schwab–oligarchs for the New World Order. One Ukrainian politician even proudly stated that they were fighting for that ‘order,’ which promotes a one-world government. The globalists want to conquer Russia. Anti-Russian sentiment among our media and politicians has been ongoing for a long time. Hillary was eager to attack Russia and probably would have had she become president.

The globalist oligarchs who helped steal the election for Biden are billionaires many times over. Some are probably trillionaires, but you can’t mention who they are with out getting smeared. They are the ones who own Fox News and CNN. Look up BlackRock and Vanguard. They own most of the shares in our media companies. The Federal Reserve has been pumping countless billions of dollars into the stock market bubble for many years and those two entities buy up selected stocks. Who owns BlackRock and Vanguard? The central bankers, of course. Who owns the central bankers? Some very rich families who control the west. THOSE are the oligarchs who should have their wealth confiscated, not the Russian ones.

We should confiscate Bill Gates’ wealth for pushing deadly vaccines. We should confiscate Zuckerberg’s fortune because he trampled our free speech and then spent many millions of dollars to help sway and steal our presidential election. Our oligarchs are the ones escalating war because they don’t want Putin to initiate a break from their world currency: The US Dollar. They especially don’t want him to make his currency based on gold. Remember Gaddafi attempted that and Hillary had him whacked.

It’s time to de-escalate the escalators.

ON SALE FOR A LIMITED TIME