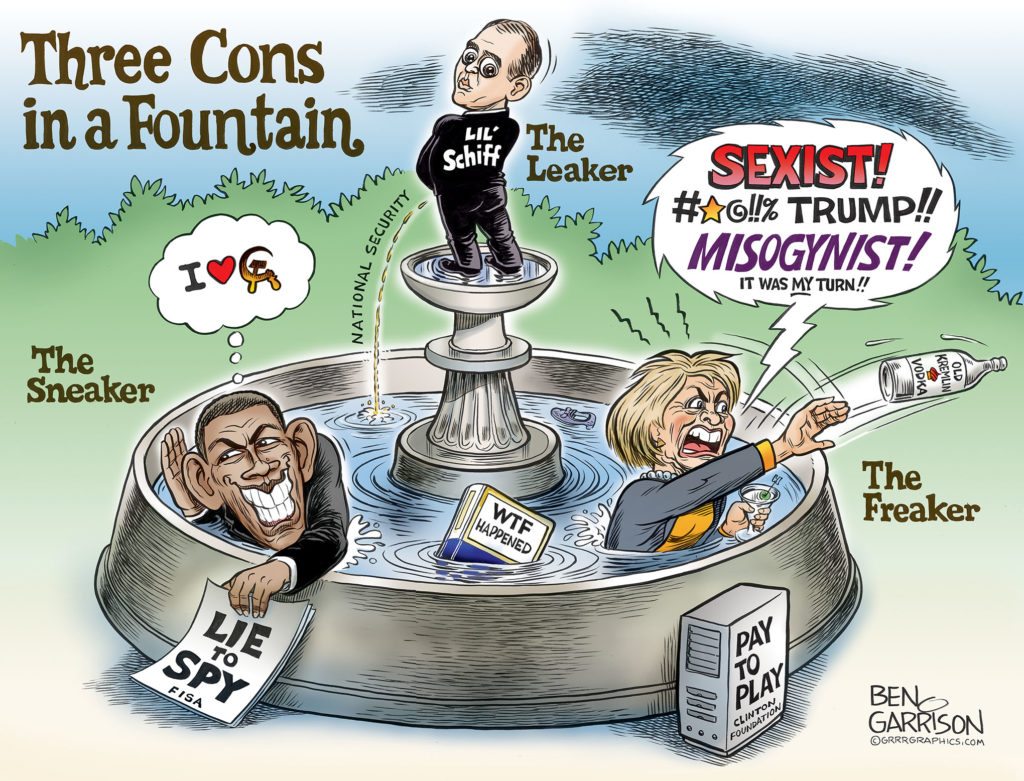 UPDATE: The Mueller report was released and found no evidence of collusion with Russia and the Trump campaign.  This report that lasted two plus years and cost the taxpayers over $25 million dollars wan’t good enough for Adam Schiff who will not accept the results and vows that there is still evidence of collusion.

The Deep State has had a profoundly corrupting influence on our government.

Obama knew Hillary had an illegal, private ‘pay for play’ server and they both conspired to produce a false facts dossier on then presidential candidate Trump. The dossier was written with the help of the British spy and private investigator, Christopher Steele, whose anti-Trump bias was well known. He worked with his Russian operatives to produce a load of anti-Trump hogwash, long since proven to be nothing but lies. Steele was paid handsomely by Hillary to manufacture the dirt. Obama then used the dossier to obtain a FISA warrant, enabling him and his FBI cronies to spy on the Trump campaign.

This is far worse than Watergate, but partisan politics keeps the Democrats quadrupling down on their “Russia rigged the election” lie.

A weird dichotomy has taken place. There are two different realities—the ‘real’ reality in which the Democratic Party leaders are proven to be traitorous scoundrels and corrupt to the marrow, and the false reality that President Trump is orchestrating the evidence against Obama and Hillary in order to distract from the Mueller investigation. Former DNC chairwoman Donna Brazile epitomizes their attitude. She was recently on Bill Maher’s “Real Time” HBO show and unilaterally pronounced the memo as complete “bullsh*t.” Maher also gave the memo no weight at all. He said it was no more important than a Facebook post. It was manufactured to distract from Mueller investigation. “He has a lot and it has them worried,” Maher said. Reality made partisan.

Speaking of bug eyes wide shut, Californian congressman Adam Schiff epitomizes the anti-reality mindset of the left. Russian comedians recently told him they had nude photos of Trump and Schiff gullibly fell for their prank. That’s how eager he is to bring down the president.

Schiff was also anxious to prevent the Nunes memo from being released, first claiming Americans would not understand it and then claiming it was a threat to national security. Yet he had no problem whatsoever leaking the anti-Trump dossier, filled with salacious lies against the president. Schiff takes it upon himself to release national security information when he sees fit. Trump called him “Little Adam Schiff” and one of the biggest liars and leakers in Washington. 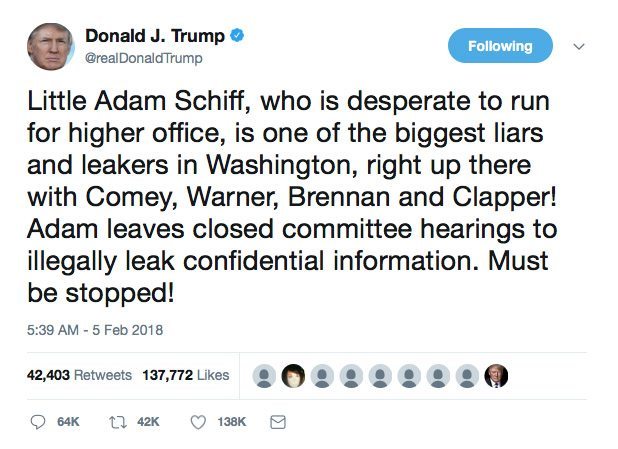 Hillary was supposed to be a shoe-in to win the presidency. Only she lost her shoe, her dignity and probably her mind in her reckless quest for power. The foul-mouthed, name calling witch had everything going for her. The primaries were rigged in her favor. People such as Seth Rich were murdered for her. The debate questions leaked to her in advance. She outspent Trump by an enormous margin. The mainstream media were her propaganda megaphone. Her opponent was illegally spied upon. Her husband, Bill Clinton, met with Attorney General Lynch on an airport tarmac to ensure Hillary wouldn’t be prosecuted for her crimes. Everything was rigged in her favor and she still lost because many Americans know who she is—a criminal whore who represented the globalist Deep State.

What was once considered a ‘conspiracy theory’ by many is now simply a conspiracy—and a very dastardly one at that.

The corruption ran to the very top and there’s a fountain of evidence to prove it. These criminals are the biggest danger to our country. Not Russian ‘bots.’