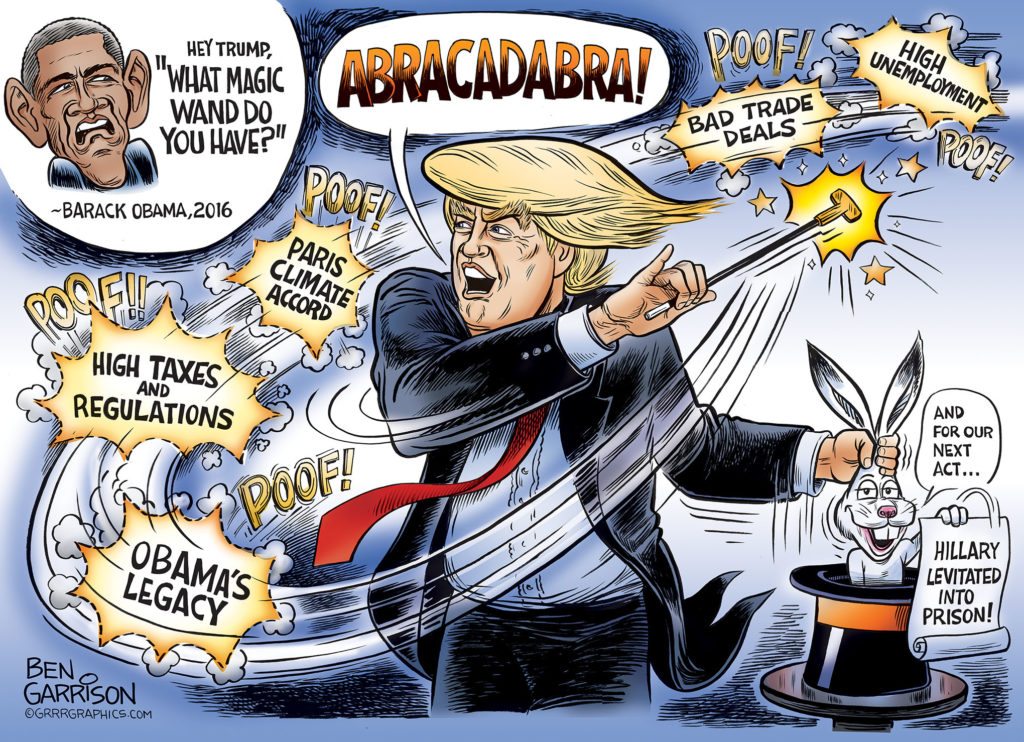 Remember when Obama sneered to hard working Americans, “those jobs are NOT coming back..”   Well, Abracadabra bitch!

I’m a little late with this cartoon, which symbolized Trump’s first year as president. It was a very successful year. Trump has brought jobs back to America. He appointed a conservative Supreme Court justice. He has turned away from bad trade deals and enforced of our borders while standing against illegal immigration. His tax-reducing bill is turning the economy around. He stopped taxpayer money from going toward the climate change bunk. He cut many of the ridiculous regulations that were hurting businesses. Most of all, Trump is systematically removing Obama’s legacy, which was the intentional destruction of America. Why was the criminal Obama bent on bringing down America? Why, to usher in communism and tyranny, of course.

One of our supporters in Florida suggested this idea. It’s based on something Obama said early in 2016. He contemptuously dismissed Trump’s plans and his ability to affect change. Challenging Trump outright, he asked “What magic wand do you have?” Hence my cartoon. Now Obama, always the narcissist, is audaciously claiming credit for the economic turnaround.

Trump still has a lot of work to do. Now we’re seeing just how corrupt and politicized the CIA, NSA and FBI have become. Obama did his best to destroy our nation and weaponize the security agencies in order to keep people such as Trump out of office. Obama, Hillary and many others need to be brought to justice. Let’s hope our president can continue to work his MAGA magic.