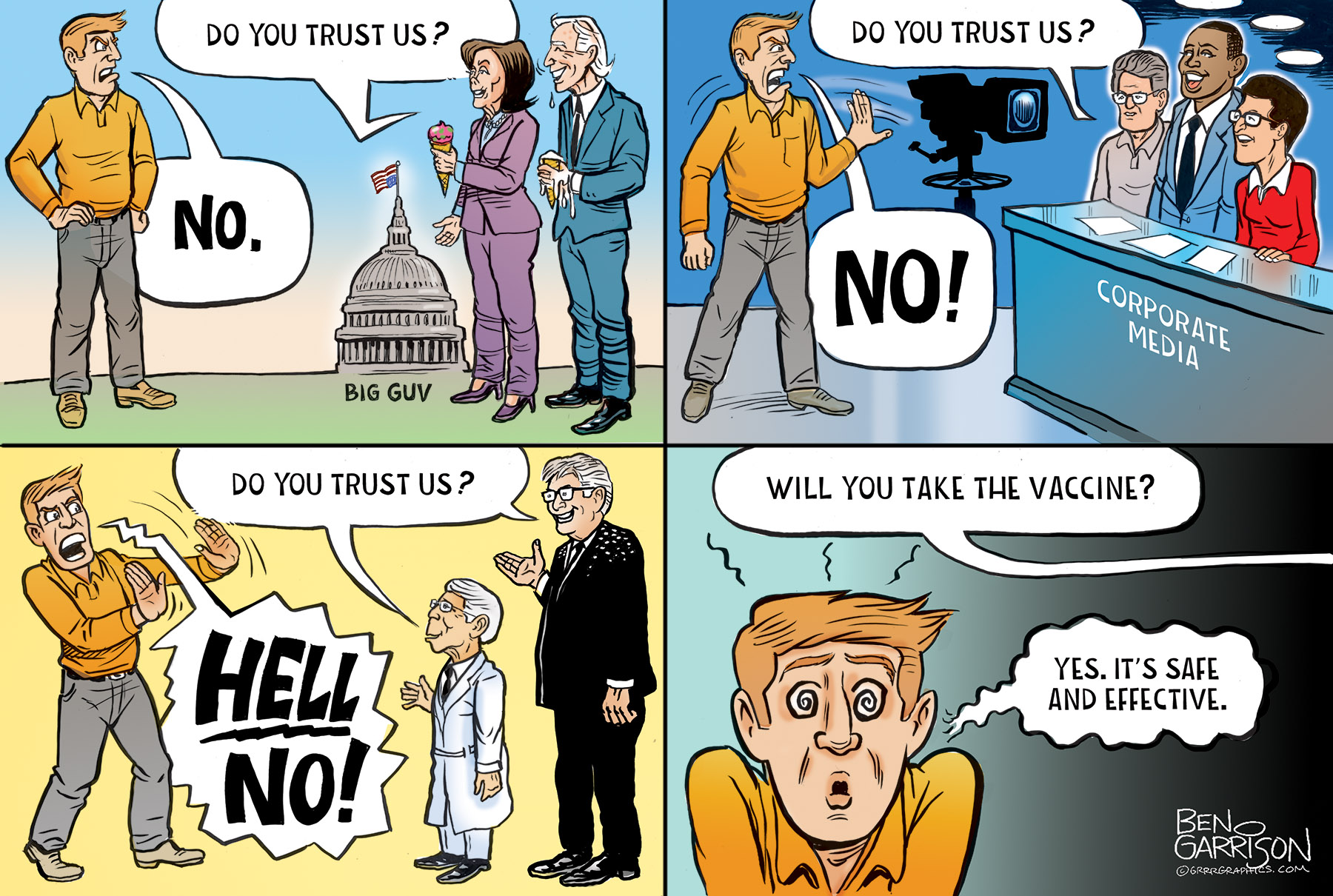 It’s time to break the spell

The western world is undergoing an aggressive mass-hypnosis campaign designed to get us all to take a Covid vaccination. Many of us are resisting and are now being demonized. Arch liar Don Lemon said we should be shunned and harassed. Will Lemon soon be donning a Nazi uniform?

We are inundated with messages urging us to take the experimental injections. There’s an annoying Walgreen commercial in which a woman uses a relaxed and friendly voice. After talking about something else she casually adds something about getting your free Covid vaccine because ‘you’re ready.’ When I hear her say that I reply, “No, I’m not ready. I’ll never be ready!”

Such commercials are everywhere and I assume they’re being paid for by the pharmaceutical industrial complex, but there’s one thing that makes the Covid jabs stand out. Unlike ads for other drugs, they do not list the side effects of getting the Covid shot. If they did, it would be horrific. I can hear it now…”Side effects may include heart inflammation, stroke, or sudden death.” They won’t say that, but serious side effects have occurred. Thousands of died and millions have experienced serious side effects. The mainstream media liars will not mention a word about such dangers. They keep repeating over and over that the vaccines are ‘safe and effective.’ If they say those words often enough and from enough sources including celebrities, they know they will break down resistance and people will eventually get them.

Many people do not trust government, our media, or the pharmaceutical representatives. They know Dr. Fauci gave American taxpayer dollars to the Chinese communists to achieve ‘gain of function.’ He lied to Congress. He and Bill Gates belong in prison, but since they are part of the New World Order, they are untouchable. Many don’t like or trust Fauci or Gates, but still they get the vaccine for a so-called pandemic with a 99.7 percent survivability rate!

They globalist totalitarians also do not want you to question their hypnotism. Observe what Senator Pocahontas (Elizabeth Warren) said last week. She wants Amazon to ban books that criticize the vaccines. Many of those books are written by real doctors and scientists who are ringing alarm bells, but Warren says what they’re writing is ‘misinformation.’ She won’t say exactly WHAT is the misinformation, but it’s a tactic now being used by the vaccine pushers. Anything that questions the ‘official’ narrative is now misinformation. That’s that. No debate. No free speech allowed. Just shut up and take your shot and hurry!

They are attempting to control reality with their hypnosis. That is, they want humanity to accept a false reality and it can’t be questioned. This will lead to a very bad end.

I’m not offering medical advice. If you insist on having mystery liquids that have been proven to be ineffective against Covid inserted into your body, then that’s your call. As for me, I will never be convinced. The love of freedom breaks their hypnotic spell.