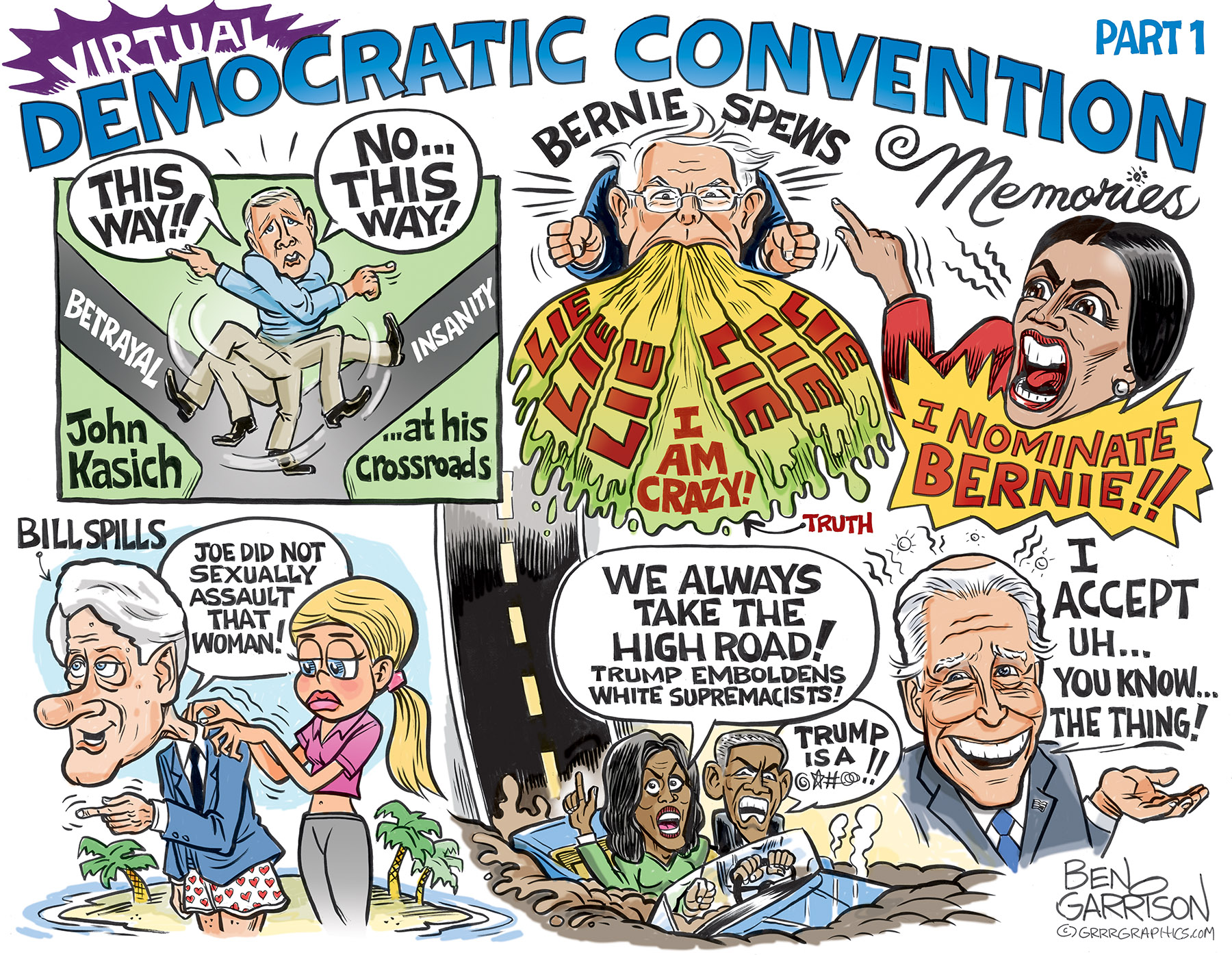 We at GrrrGraphics have been watching the virtual Democratic Convention extravaganza with a mixture of humor and disgust. We were disgusted that Andrew Cuomo smeared Trump as being ‘dysfunctional’ and ‘incompetent’ for COVID-19 in New York state–even though Cuomo has blood on his hands for bringing the virus to nursing homes.

We were amused that John Kasich chose an actual, literal crossroads location for his speech about our country being at a crossroads. We were disgusted that the Republican turncoat roasted Trump while praising Biden. Kasich has a severe case of Trump Derangement Syndrome.

We watched Crazy Bernie Sanders spew rote lie after lie about the president. The socialist, ‘progressive’ once again caved in to the political establishment. He supports Joe as eagerly as he supported Hillary. It was amusing to watch AOC briefly nominate the ‘cuck’ Bernie before joining his ranks and supporting Biden. The Republican Kasich was given more time than the DNC gave their rising star, Cortez.

Then we watched arch rapist Bill Clinton’s disgusting display of virtue signaling as he lectured Trump about a disorderly Oval Office. Everyone thought of how Bill ordered a very young intern to service him in said office. I’m sure it was orderly, but why the DNC would allow a man associated with the known pedophile, Jeffrey Epstein, to make such a speech underlines the hypocrisy and depravity of the Democrats. Joe is also accused of sexual assault and we’ve seen him too many times on camera sniffing women and children.

Michelle Obama was considered the star of the show. The lying fake news media gushed praised for the former First Lady. She again made the tired claim that she and her hubby were ‘taking the high road,’ and then she immediately took the low road. She accused Trump of emboldening white supremacists and putting the children of (illegal) immigrants in cages. Those cages were built under Obama’s reign, but no matter. Next we’ll get to hear her husband drag Trump into their disgusting mud, and we’ll address that in Part 2.

Joe Biden accepted the nomination, but his speech is yet to come. It should be amusing, and probably disgusting as well.