“The Purebloods shall inherit the earth..”

We know on social media one must be careful about talking about Covid. “Wrong think” can lead to getting banned or deleted from sites such as YouTube, Facebook, and of course, Twitter. I spoke out against the Covid vaccines on Facebook and I kept getting banned, so I finally deleted my account. Due to my anti-medical tyranny cartoons and anti-vaccine cartoons in particular, Facebook pulled the plug on our main 60k followers cartoon page. We had a backup page with far less followers, but our interest in actively participating on Facebook waned greatly.

Fight Censorship through supporting Grrrgraphics high impact cartoons- We draw for you! Click to support us at SubscribeStar a monthly donation at whatever amount is comfortable

I have been drawing editorial cartoons to warn people against vaccine abuse long before Covid arrived and shortly after the manufactured bioweapon was unleashed, I found I had enough cartoons to put together a book. “Make America Well Again” was published in 2021. Kent Heckenlively was kind enough to write a forward for it. Fortunately it was not banned on Amazon—perhaps because I chose a positive title and cartoon of President Trump as a doctor diagnosing America. Trump must renounce the vaccines that he helped rush out. He wanted to be a hero—I get that. Still, the billions of taxpayer Covid money sent to Big Pharma should be clawed back due to their flawed trials and inadequate research. 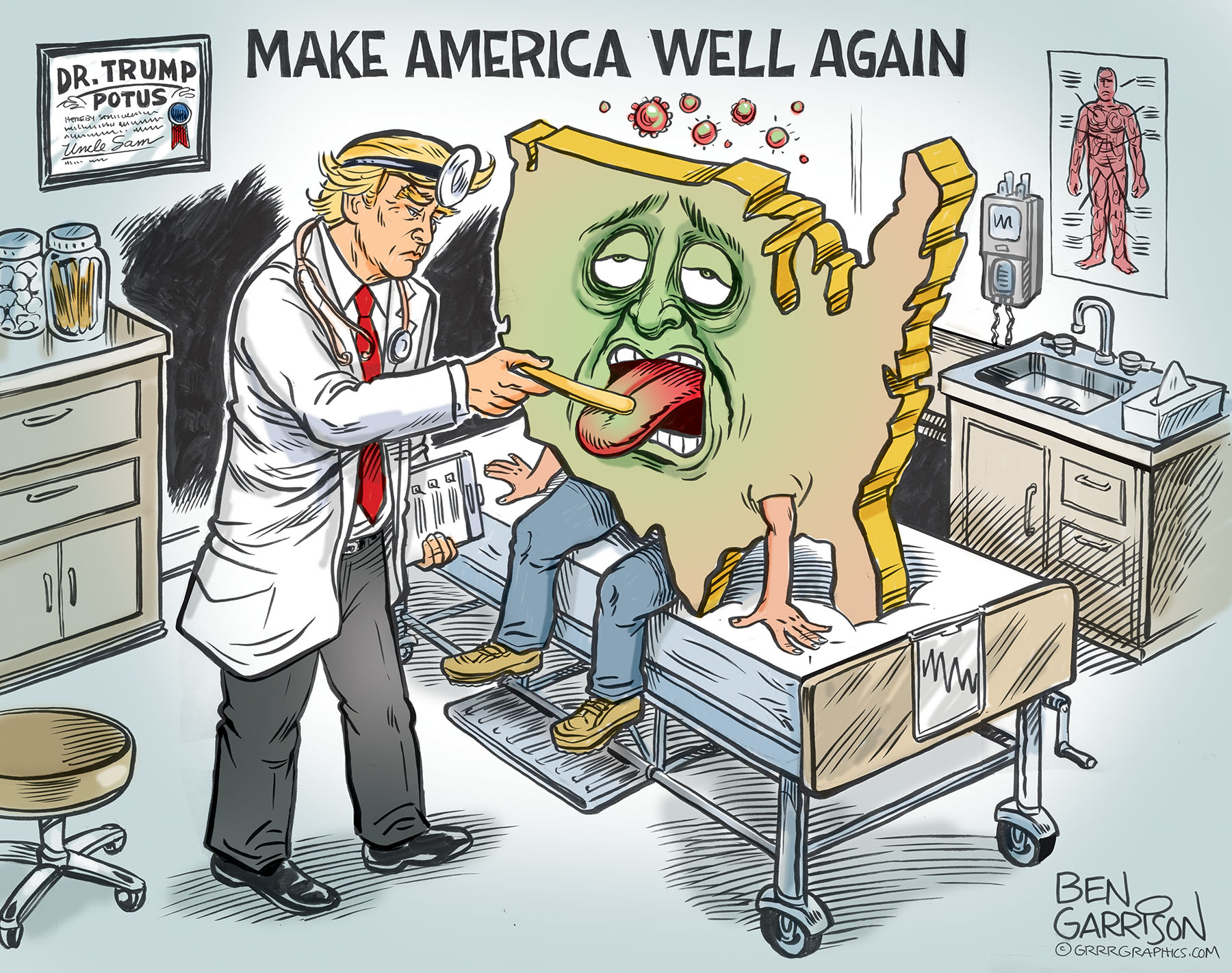 Many respected scientists and doctors vociferously warned about the dangers of the rushed-out mRNA vaccines. They were silenced by social media. The mainstream media depends on Big Pharma advertising so naturally they pushed the deadly Covid injections instead of doing real investigative journalism. The general public got brainwashed and bullied into taking the jabs and wearing the masks—both dangerous to health. Even some corporations that should have known better such as Fox News made vaccination mandatory for their employees. Too many people had to get the poison pokes in order to keep their jobs.

Now many among the vaccinated are suddenly dropping dead.

Way too many children and teenagers are getting myocarditis. We keep reading stories about young, physically fit doctors and athletes who suddenly die of heart attacks. Morticians say they are finding long clot material inside the veins of the dead. The side effect list is long and disturbing, but what’s more disturbing is Big Pharma is permitted to push boosters based on testing a half dozen mice.

It’s about money and control, and I believe the so-called ‘elite’ globalists running the show had long planned a deadly virus.

Their point man, Fauci, saw to it that gain of function occurred at a communist Chinese military bioweapons lab in Wuhan. It may have been released prematurely. After all, the safety standards were proved to be sloppy at the lab. To be sure, they were working on a contagious respiratory virus, but it wasn’t yet deadly enough. So when it was accidentally released Fauci, the World Health Organization, and others controlling the ‘science’ used the mainstream media to magnify the danger. Meanwhile, Fauci and his operatives tried to cover up their complicity.

Thanks to dictatorial government agencies who insisted they alone had the final word on the ‘science,’ and a puppet corporate media that fanned the flames of fear, people were wearing masks, agreeing to lockdowns, and accepting mandatory jabs. We all got a good glimpse into the globalists’ plan.

They wanted vaccine passports to track and control us. They also wanted to determine what would go into our bodies. Those that resisted were smeared and dehumanized.

Biden told us that if we got the mRNA ‘vaccine,’ we wouldn’t get Covid. That was a lie. Not only did the fully vaccinated get Covid, they could also spread it and many died of it. Even more died from the vaccine itself. It was neither safe nor effective! During the blitz of bullshit delivered by so-called leaders, there were many courageous, expert voices warning us about the so-called vaccines.

Too many didn’t listen. Too many remain brainwashed today. I still see people wearing masks alone on a sunny day. Some like to brag about getting the latest ‘booster’ despite a rising tide of evidence of how dangerous those boosters are. Too many are not paying attention even now!

What’s next? Probably mandatory flu vaccines. See how that works? They accustom us to obeying and then the medical tyranny never goes away. Resist!

We need investigate the Covid scandal. Fauci lied to Congress. Bill Gates and Fauci belong in prison along with Big Pharma executives.