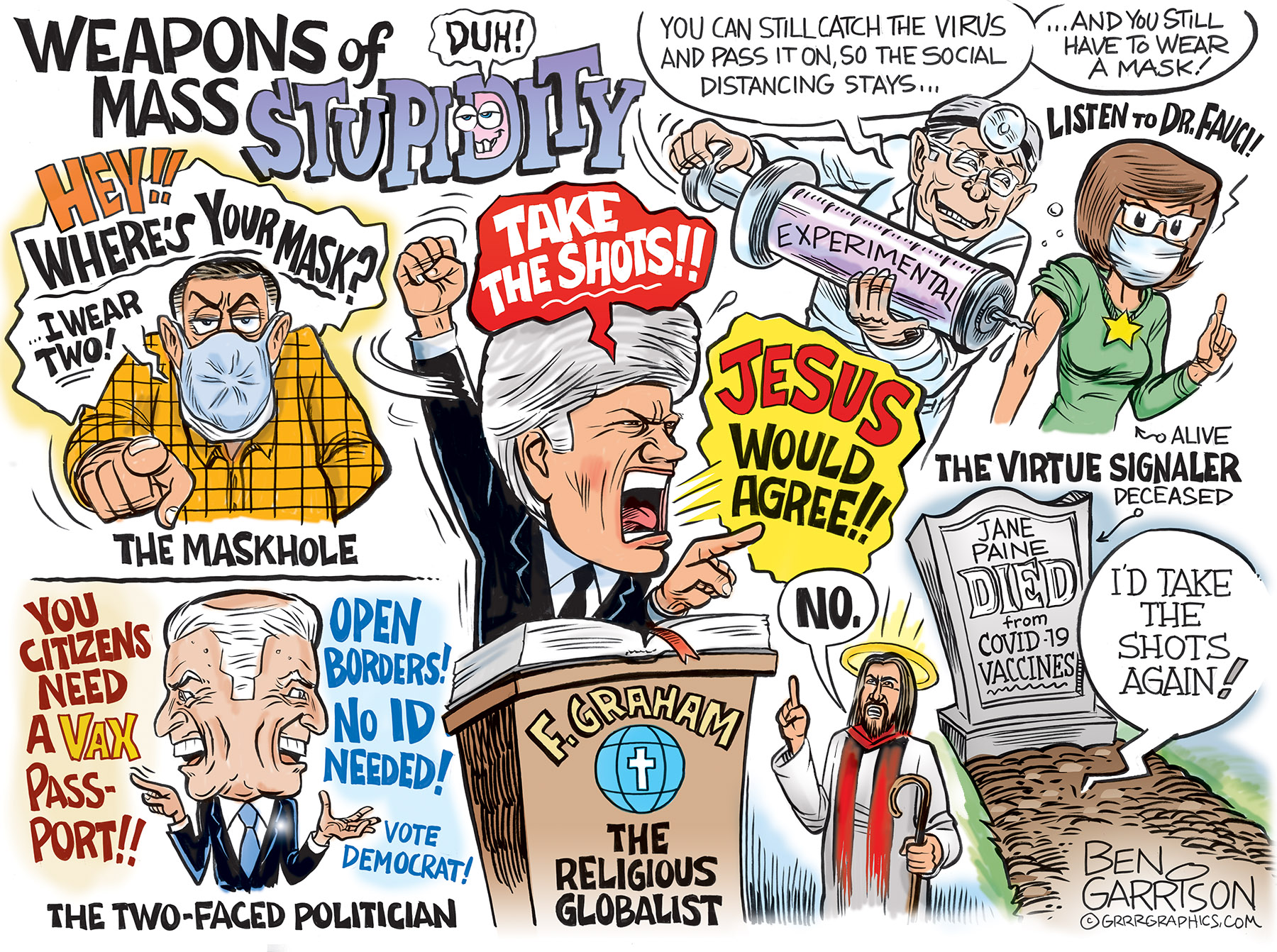 “When the whole world is running towards a cliff, he who is running in the opposite direction appears to have lost his mind.”

The globalist ruling caste and their mass media want you to take COVID-19 shots. Right now! Don’t think—just do it. Unfortunately too many are robotically getting the jabs even though there have been many reports of the recipients dropping dead shortly thereafter.

I read about New Zealand’s Prime Minister Jacinda Ardern and what she said regarding enforcing her COVID-19 mandates. She said she wasn’t worried—the people would take care of most of it. And they did, just like they’ve done here in America. Peer pressure and fear are bad combinations and there are always ‘Karens,’ both male and female, who will hector those not following the ‘new normal.’ One of those so-called ‘normals’ is wearing a mask and it’s anything but normal. It does nothing to halt a virus and causes many other problems. They are also dehumanizing. I had one of these people hijack me in the parking lot of local grocery store. He was grumpy and accusatory—“Why aren’t you wearing a mask?,” he barked. I wasn’t even in the store, but perhaps he saw me inside shopping–sans mask. I quickly realized I didn’t want to argue the merits of mask wearing with a complete stranger, but his audacity angered me. I considered him to be an ignorant ‘maskhole.’

Brainwashed people such as the maskhole do the enforcement work for Bill Gates. He uses such people as weapons of mass stupidity.

Another group can be called ‘virtue signalers.’ They will gladly take any and all vaccinations without question or reflection. They trust ‘science.’ Scientists will always treat their health as their paramount concern, right? Wrong. The big vaccine makers are concerned with making billions of dollars first and foremost. They are also protected from prosecution if their vaccines cause harm. They can’t be sued, which means they can take short cuts. Unaccountability does not go hand in hand with safety. A few thousand drop dead from their experimental concoctions? Have the mainstream media ignore such stories. Vaccine makers also use paid operatives to attack whistleblowers.

Amazingly, even those who suffered severe side effects will often claim that they are proud of getting the shots and would do it again. Ben Stein is an example.

SUPPORT OUR WORK WE ARE ON PATREON CLICK TO BECOME A GRRRTEAM MEMBER AND JOIN US N THE FIGHT AGAINST TYRANNY!

The globalists are marshaling all forces to brainwash people into getting the dangerous inoculations. Even religious figures such as Franklin Graham (son of Billy Graham) who proudly calls himself a globalist for Jesus. He said everyone should get the shots and claimed Jesus Himself would support the experimental vaccines. Considering that most vaccine makers add aborted fetal tissue to their product sort of makes me think that Jesus may not approve. He would also not approve of experimental gene therapy on millions of humans who have perfectly adequate immune systems.

Finally, Joe Biden allows anyone to waltz into our country without testing, vaccinations, IDs, or passports…yet he wants Americans to get a vaccine passport to identify themselves as jab recipients before they can enjoy freedom. It’s a gross violation of our Fourth Amendment, but Bill Gates and China want it, so Biden is pushing it. He wants no ID as a prerequisite for voting, however.

Fauci and Gates helped China develop the virus in the first place. They are traitors. LOCK THEM UP!

Limited Edition Poster Now Available -Click to order your print, only 100 will be printed