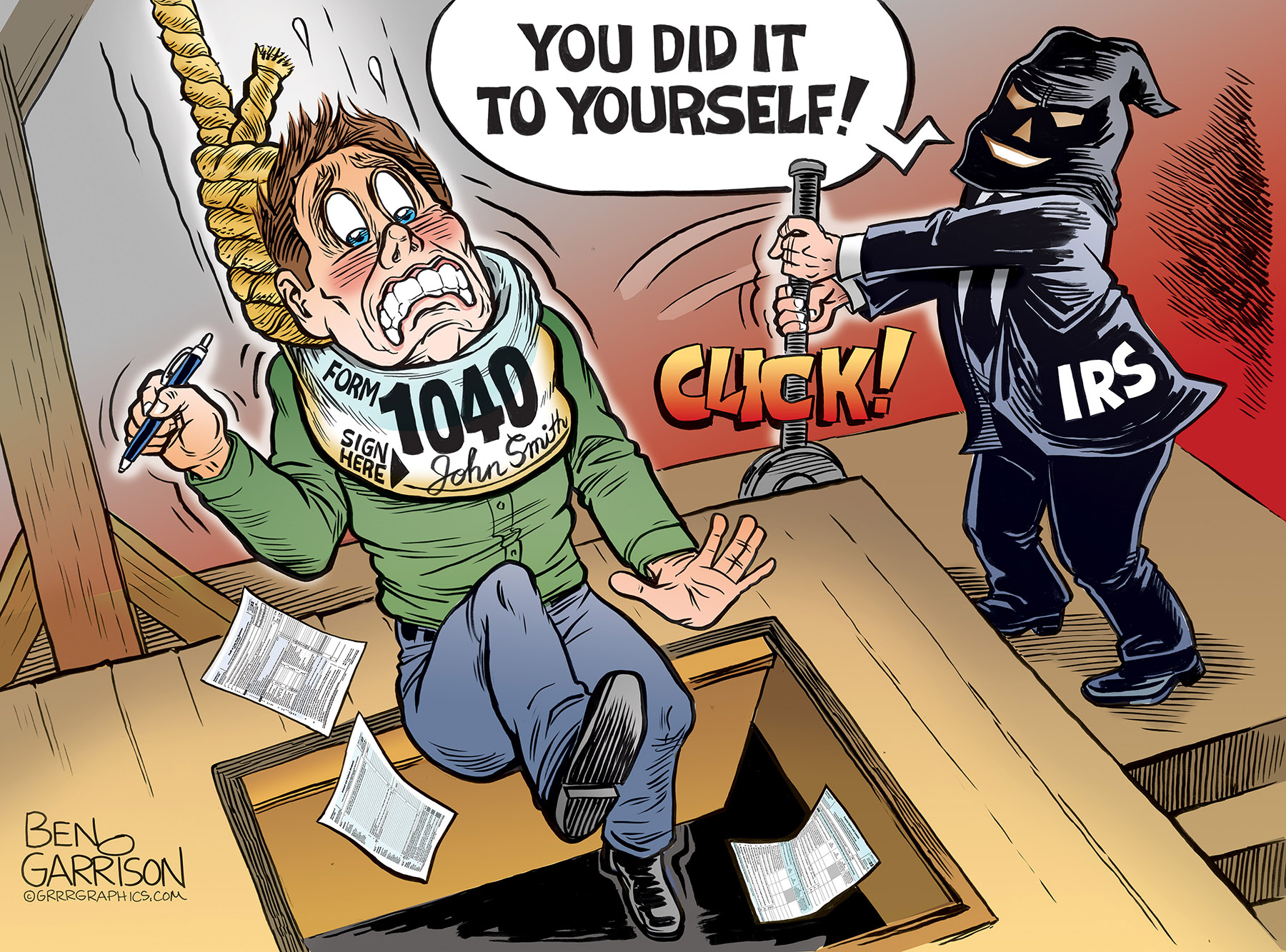 Frank Chordov’s landmark book, “The Income Tax, Root of All Evil,” makes an excellent case for the necessity of private property, which should rightfully be owned by those who worked for it. He wrote,

“…The right of ownership is traceable to the right to life, which is certainly inherent in the human being. Property rights are in fact human rights. A society built around the denial of this fact is, or must become, a slave society.”

Socialists will describe it differently. They’ll say you’ll own nothing and be happy, but what the ‘might-makes-right’ socialists really have in mind is totalitarianism. A government that controls everyone on a granular level.

The first income tax was put in place by President Lincoln, who became a tyrant during the Civil War. To pay for his ongoing campaign of carnage, he wanted an ‘excise’ tax on all income, but it was really a direct tax, which our Constitution prohibits. It started out as a flat 3 percent tax on income, but when that wasn’t enough he moved to a graduated tax to pay for his killing machine. Lincoln kicked off the trend toward larger government and empire. He laid the foundation for the 16th Amendment. Lincoln freed the slaves, but then made it inevitable that more slaves were created.

Mel Stamper also revealed Lincoln’s tax on income and he delved deep into the origins of the Internal Revenue Service. In his book, “Fruit from A Poisonous Tree,” Stamper tells us that the IRS originated not from law, but from trusts associated with conquered territories after the war with Spain. The Philippines, Guam, the US Virgin Islands, Puerto Rico, and the District of Columbia were required to pay taxes, not American citizens, yet due to fear and force, Americans complied with the fraud. Stamper writes,

“My investigation discovered that, except for the very few who are engaged in specific or licensed activities, the Citizens of the fifty states of the united Sates of America have never been required to file or pay “income taxes.” Americans who have been frightened into filing and paying ‘income taxes’ have been robbed. Millions of lives have been ruined. Thousands of innocent people have been imprisoned on the pretense they violated a law that does not exist.”

Unfortunately the 16th Amendment was introduced along with the Federal Reserve in 1913. The absolute right of property in the United States has been since forever violated. It was the year Americans were sent down a path toward slavery. The result of this system is a 30 trillion dollar un-payable debt, an ever-growing government that strips us of our liberties, a worldwide empire, and a Gestapo-like IRS.

When we sign the tax forms we collaborate with tyranny. I’m starting to see the tax commercials again and they try to make taxes fun—like playing a game. Use our software, it’s fast and easy and you will win the game! You may get back some of your own money if you play their game properly. I’ve even seen outfits with the name “Liberty Tax Service.” It’s sick. They say filing and paying taxes is voluntary, but those who don’t volunteer can end up in prison. That fear keeps us filing, but when we do we violate our own 5th Amendment protection about testifying against ourselves.

Once they obtain our signed confessions, the IRS can use them against us however it likes. After all, the tax code is so ridiculously long that many can’t even say how many pages it is, let alone understand its contents, After poking around the Internet it appears to be about 3,000 pages. Will anyone except tax lawyers read all of that? No, but that doesn’t mean the IRS can’t leverage plenty of legalese to hang you on a technicality if it so desires. They’re the hangmen and we deserve to get hanged by signing our own financial death warrants.

Consider this also: Our leviathan government doesn’t even need our tax dollars. They can order the Federal Reserve to print up endless trillions of dollars to fund their wars and corruption. Sure, you’ll get to pay interest on the debt via income taxes, but it can never be paid off. It’s a lesson in futility and slavery.

How to end it? Stop filing. If millions of us did that, it would send a clear message just as the truckers in Canada are currently sending a clear message to the tyrants in Ottawa.

One man, Peymon Mottahedeh, has successfully proven that we aren’t required to file. He won his court case and his organization is helping Americans learn how avoid IRS tyranny. Here is a link to his organization: