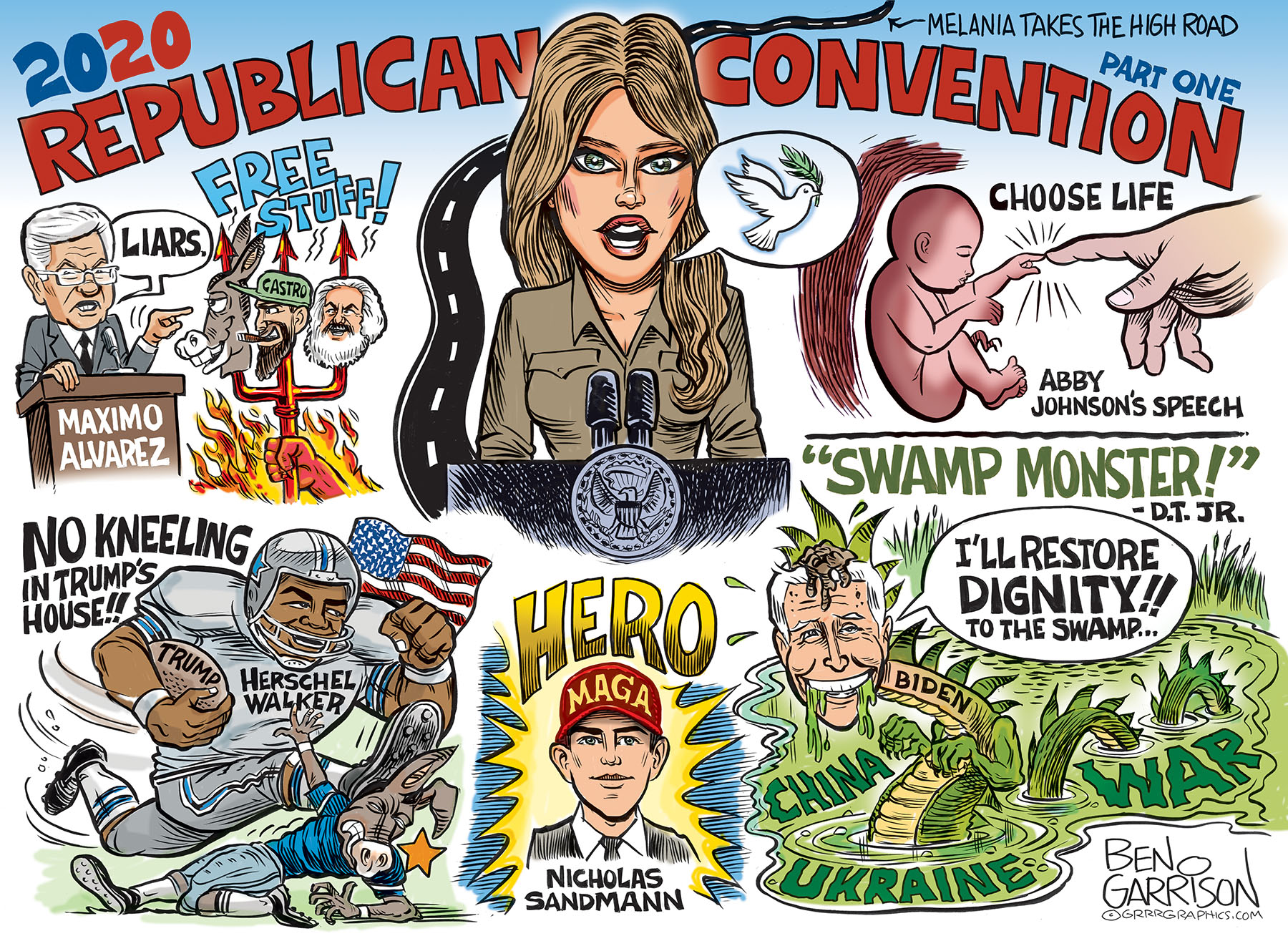 Our impressions of the 2020 Republican Convention are naturally more positive than what we saw during the anti-American carnival show put on by the Democrats.

We couldn’t fit in everything into one cartoon, but here are some items that stood out for us.

The First Lady’s speech did what Michelle’s did not. That is, Melania Trump actually took the high road, whereas Michelle Obama only talked about taking the high road and then proceeded to a lowly, muddy road in her attacks on Trump. The left attacked her savagely, including washed up hack, Bette Midler. Midler called our FLOTUS an illegal immigrant and proclaiming, “she still can’t speak English”. FLOTUS speaks six different languages.

We liked what Maximo Alvarez said about socialism and he knows first hand. Socialism is evil and its adherents are infernal liars.

Herschel Walker countered the lefty media’s assertion that President Trump is a racist. Everyone who knows Trump knows he is a fine man, and Walker is the president’s friend. The only time Americans should kneel is before God.

The Maga hat-wearing Nicholas Sandmann displayed remarkable poise and courage when he faced the far left professional protesters and drum bangers who tried to get him to react negatively in order to smear all Trump supporters as racist. CNN may dismiss Sandmann as ‘insignificant,’ but I think the young man will continue to make a good account of himself during his lifetime.

Donald Trump Jr. delivered a funny barb at Joe Biden. Naturally it had to be illustrated here. Biden has been in politics for 47 years and is comfortable wallowing in the swamp.

We were the most moved by Abby Johnson’s speech. She was once an award-winning abortion advocate for Planned Parenthood, but she became so disgusted by the organization’s push for more and more abortions and not just for emergencies. Too many clinics reside in black neighborhoods and blacks seem to be targeted for more abortions than other races. It’s an obvious example of systemic racism that is applauded by the Democratic Party. It’s also part of Margaret Sanger and her eugenics philosophy. The left may see unborn humans as blobs of matter or tumors, but Johnson was so saddened and dismayed by the grim reality of what she saw that she became an anti-abortion leader.