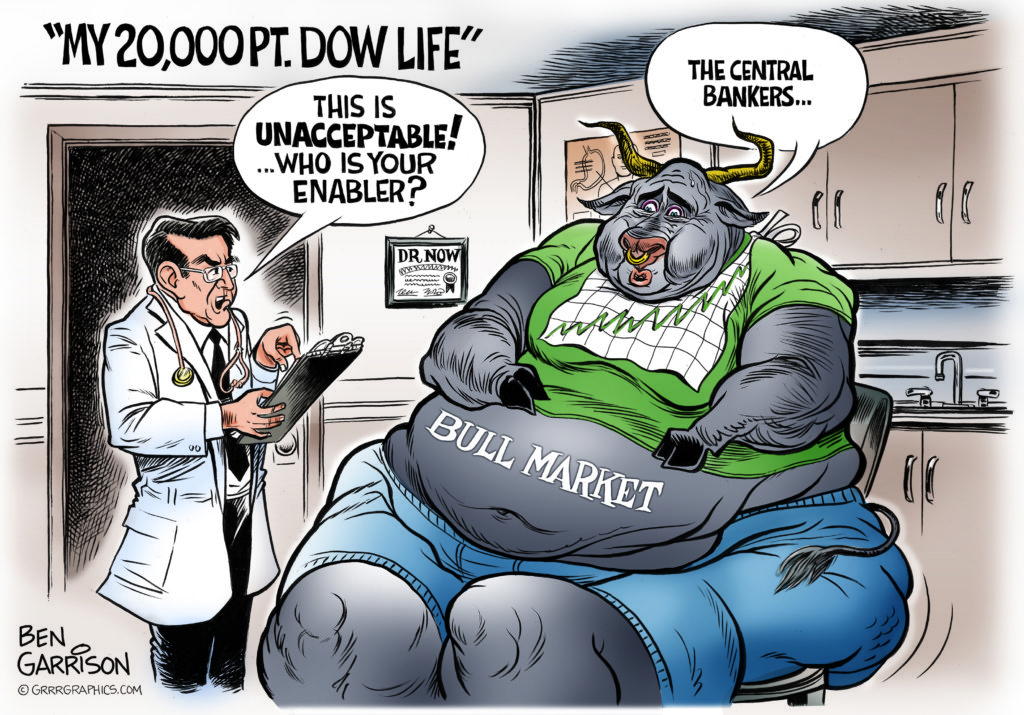 The stock market continues to make new highs. Every pull back is seen as a buying opportunity, and if a drop becomes too pronounced, the Fed steps in and injects cash to prop it up. We are told the economy must be doing great because the market keeps going up, up UP! I suppose it’s a matter of perspective. It’s not so great for over 50 percent of Americans who own no stocks whatsoever. Most Americans are living paycheck to paycheck with little or no savings. They’re struggling to pay rent and the bills. They’re not going to be buying AMZN at $1,000 per share. Jobless young people who are steeped in college debt and living with their parents can’t afford to buy stocks, either. Baby boomers are cashing out stocks to pay for their retirement. So what exactly is fueling the perpetual rise in stocks? The central bankers and global corporations themselves. President Trump and Obama have nothing to do with it. It’s an insiders’ game.

The top one percent owns nearly 40 percent of stocks. The top 20 percent owns 92 percent. In other words, the fabulously rich continue to get stupendously richer by pumping up their own stocks while the average working person hasn’t seen a real wage increase in over 30 years. Yes, I know I’m at risk of being called a socialist by pointing this out. Some may say I’m trying to foment class warfare, but all I’m doing is stating facts. We already have a quasi-socialist system. The government steals our money and redistributes it as they see fit. Citizens were ordered to buy ObamaCare whether they liked it or not.

We also have a corporate fascist system. While many Americans are unable to pass ‘GO,’ the Federal Reserve routinely prints and doles out free money to its central banker owners. They in turn sock it into the stock market in the form of quantitative easing, ‘twists’ or whatever they want to call it. They own the Monopoly® board and make us pay each time we land on their squares. They also use their easy money to keep gold and silver suppressed. A classic case of ‘paper covers rock.’ Silver should have done what Bitcoin has done—gone up exponentially. The bankers apparently can’t rig or short Bitcoin.

The big shots who own the game have run out of ideas about where their free money can be parked. Loan it out to the poor or entrepreneurs? Oh no, can’t do that…too much risk! Bonds? No way with these lower rates. The money addicts want the big returns that stocks can provide and so that’s where the money goes. Martin Armstrong even thinks the Dow can hit 40,000. Why not? It benefits those at the very top—you know, those who already own and control most anything anyway. More money for Bezos, Gates, Warren Buffett and the big bankers—great, huh? Those running the show through the CFR and at Bilderberg will continue to have ever-more money and influence while the little guy will lose more freedom, money and jobs. A rising market is great for the top of the pyramid, and terrible for the rest of us.

These are the things I think about as the rigged Dow continues to get force fed. A fat market living at all-time highs is NOT a good thing for the average citizen who picks up the tab, and if the market ever does explode, it will be the average citizen who will suffer the most. You see, it’s not really ‘free money.’ It’s debt currency and it produces a kind of privileged royalty at the top and debt slaves underneath them. It’s the sort of situation that sparks a revolution.