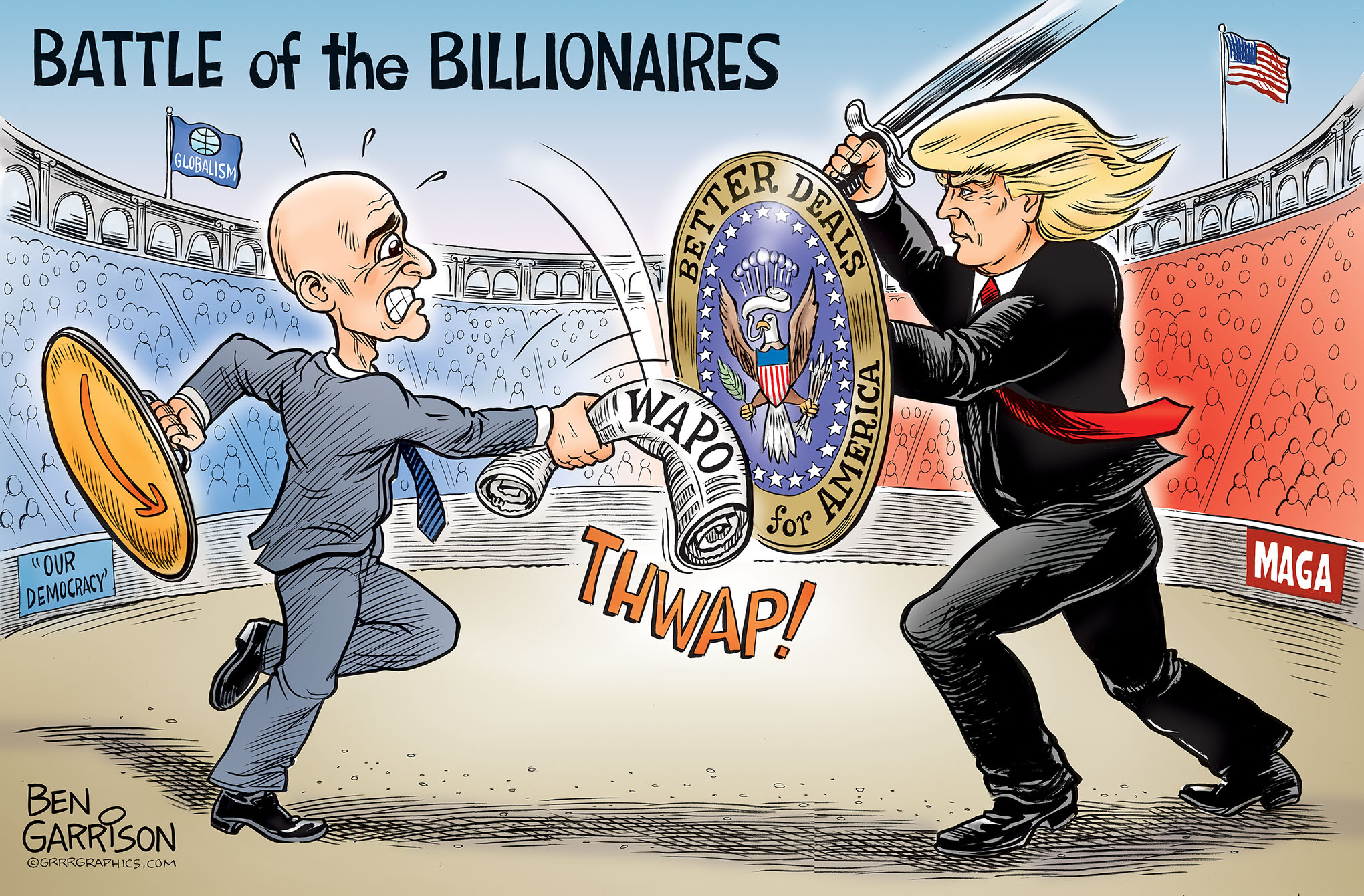 The globalist progressive Jeff Bezos is not only looking more and more like “Dr. Evil,” he’s also acting like him.

That is, he’s trying to take over the world. He’s achieving this by selling nearly everything on Amazon.com as well as monitoring what everyone purchases there. Some may call me a hypocrite for selling my own books there, but it’s the only way I can reach a wide audience. I also use YouTube and Twitter as well as Facebook, but I use them to promote liberty and libertarian ideals. I don’t expect it to last.

The wave of censorship now being pushed by the Deep State oligarchy will make sure I’m kicked off sooner or later.

A good reason to sign up for our GrrrNews so you never miss a cartoon!

Bezos’ net worth has been fluctuating lately due to market sell offs, but the last time I checked he was worth around $120.5 billion. He bought the Washington Post for a paltry $250 million cash and now uses it as a mouthpiece to spout anti-Trump and fake news rhetoric. The once proud newspaper is now a lobbying rag without much credibility. President Trump has called it the “Amazon Post.”

Amazon has killed thousands of jobs and it also mistreats its own workers. So much for Bezos wanting to help the working poor and impoverished. In fact, for a few billion dollars he could end world hunger. He and his ilk including Bill Gates don’t want to do that. In the end, they are narcissistic egomaniacs that are drunk with money and power. They think they own the world. It’s theirs. They want to control it and reduce the world population. But that’s a topic for another essay.

Bezos accused President Trump of ‘eroding our democracy.’ All the lefty progressives say ‘our democracy.’ Have you noticed? They know well and good that we’re a republic, but they don’t want government ruled by law. They want to control a mob and guide their minds into voting away individual rights and property guaranteed to us by our constitutional republic.

Trump wants better deals for America. Trump is considered a ‘minor’ billionaire, but he has gained insight into what’s really going on and what’s going wrong. He wants to help the American people and make the American republic great again. He’s seen how Bezos cuts tax corners and uses the post office to undercut his competition and grab more customers and power. The US postal service is perpetually broke and Trump wants to change that. Make Bezos pay his fair share.