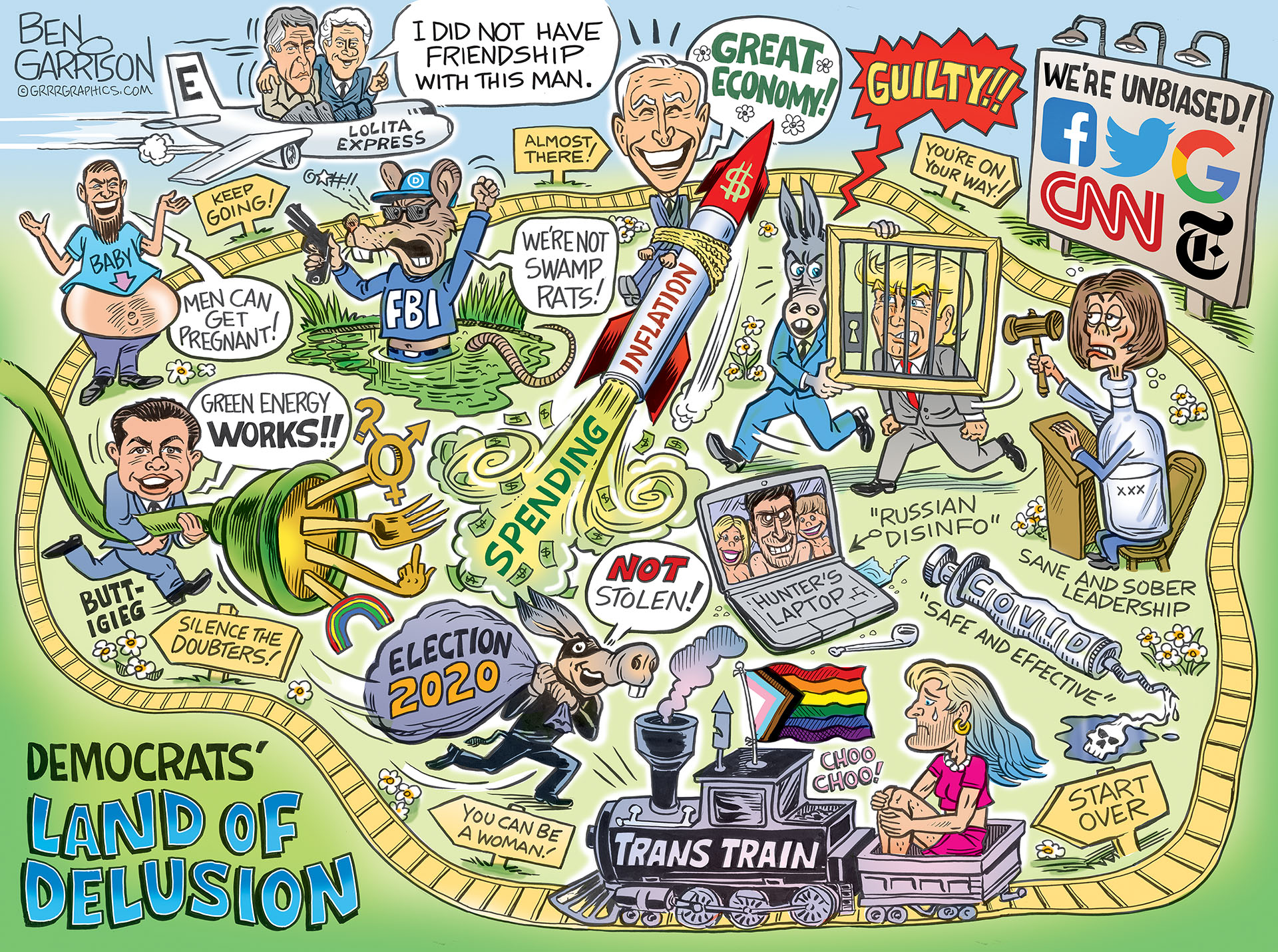 Welcome to the “Democrats’ land of delusion”

There’s too many men, too many peopleMaking too many problemsAnd there’s not much love to go aroundCan’t you see this is the land of delusion?

The Democrats think they can turn reality on its ear. They are deluding themselves, but they expect Americans to share in their delusions. They’re gas lighting us. They’re liars.

The problem is, they have control of the mainstream and social media, which parrots and amplifies the lies. The Democrats control the FBI and the DOJ. Their lies carry weight and muscle, and they can cause great damage.

The Covid panic is an example of that damage. We were told that we needed lockdowns, masks, and endless Covid ‘vaccinations.’ The latter was an experimental mRNA concoction that killed and injured more people than the virus. Many of us rang alarm bells ahead of time, but few listened. They got caught up in the delusion.

My cartoon features some of the Democrats’ delusions. Of course, space was limited and I could not jam them all in. I will list ten of them here:

1. Covid was used to control countless millions around the world and it was easy for the medical tyrants to pull it off. More Democrats than Republicans were onboard with the delusion, although President Trump himself pushed the vaccines (he was trying to be a hero). Trump needs to admit he was wrong. Biden and Fauci will never admit wrongdoing and their delusions persist. I still see people wearing masks at supermarkets. They actually think a wisp of cloth protects them from disease because the partisan Democrat Anthony Fauci told them it would. Some are still taking the clot shot, although many are now waking up since so many people around the world and of all ages are dropping dead from the vile jabs.

2. The Democrats told us that Trump, with the help of Putin, rigged and stole the 2016 presidential election away from Hillary. Now they say we’re traitors if we question the election of Basement Joe, even though the evidence of election fraud that got him elected is overwhelming. Furthermore, Hillary and the FBI conspired and created the Russia conspiracy hoax. They are the traitors, but now Biden says half the country are dangerous terrorists because they support Trump.

3. The Transexual fad is perhaps the most egregious delusion. Reality dictates that a man cannot become a woman and vice versa, but the Democrats enthusiastically support the delusion. One far-left loon tweeted, ’Trans women are real women.’ If they really are real woman, why even add the word ’trans?’ A man who  wants to be a woman can take hormones and eventually get surgically mutilated, but his DNA cannot be changed. Many regret having the devastating surgery and commit suicide. Despite the glaring evidence, Democrats are pushing ’trans’ in grade schools. Kids are too young to make their own decisions, but are pressured to be trans simply because it’s trendy. It’s a very dangerous delusion when children are abused with dangerous puberty blockers or even offered surgery without the parents’ consent. Part of the delusion has now grown into not acknowledging male and female sexes altogether. Democrats can’t define what a woman is. They think there are hundreds of genders. They want to punish those who use the wrong pronouns. They think a man can get pregnant!

4. The Climate Change cultists are ruining our economy by pushing green energy, which simply cannot compete with oil, natural gas, and coal. The Democrats are delusional and think we should all immediately stop using cars with internal combustion engines and instead purchase very expensive and environmentally unfriendly electric vehicles. The electric cars have limited ranges. The batteries wear out quickly and are toxic to the environment. New batteries cost as much as a new car and the rare earth to create the batteries come from China. People who charge their cars may not realize that the power comes from power plants fired by fossil fuels, including coal. Biden can’t simply snap his fingers and make green energy a reality. There are consequences to his delusion, including high gas prices and economic suffering.

5. I could not fit this into my cartoon, but Kamala Harris and Biden’s press secretary cannot make the border secure simply by telling us that it is secure! It’s obviously not secure and millions of Americans are suffering from higher crime and chaos as a result. We need to send the millions of illegal invaders to liberal sanctuary cities and let those who are deluded into thinking that all illegal immigration is a ‘gift’ deal with the hordes and pay for their well-being.

6. The Democrats are so deluded that they think spending more money can lessen inflation! Biden and his allies in Congress have already spent trillions of dollars we don’t have. Most of it goes to wasteful enterprises such as the Ukraine War and green energy. Loan forgiveness will only add to the inflation. Inflation is simply another way government steals wealth from average Americans. Yes, Biden is not only a deluded liar, he’s also a thief. He’s even spent $80 billion on the IRS so freshly minted IRS auditors (well armed) can steal more money from the working class. I wonder if he’ll get his cut.

7. The Democrats have relentlessly demonized President Trump. They are desperate to charge him with a criminal offense and if they have to frame him, they’ll do it. They already made many go along with their delusion that he was Putin’s puppet. They impeached him based on lies. They think they can pick their own president—the public be damned. They do this while under the delusion we have a ‘democracy.’ We’re not a democracy. We’re a Constitutional Republic. That Republic protects individual and minority rights from an oppressive majority.

8. The mainstream media, also known as the legacy media, also known as presstitutes, are an insult to real journalism. For example, you will never hear them investigate Pfizer for their criminal wrong-doing, but they will relentlessly harass Trump with their constant lies.

9. It’s a delusion to think we are being run by patriots looking out for the best interests of Americans. The Democrats despise MAGA. They don’t want America made great again. They want to preserve their uni-party known as the Deep State Swamp, which has a globalist bent. Many politicians are puppets of Red China and the globalist corporate lobbyists that flood the beltway. Congress is increasingly being populated by senior citizens. Some of them belong in nursing homes. Politicians are demented and confused, but they keep their office so they can keep their families supplied with graft. They are also addicted to power. Those of us who want term limits? It’s delusional to think that will happen any time soon.

10. It’s delusional to think we can again send humans to the moon when we never sent them there the first time…but that’s a subject for a future cartoon. 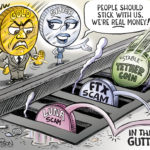