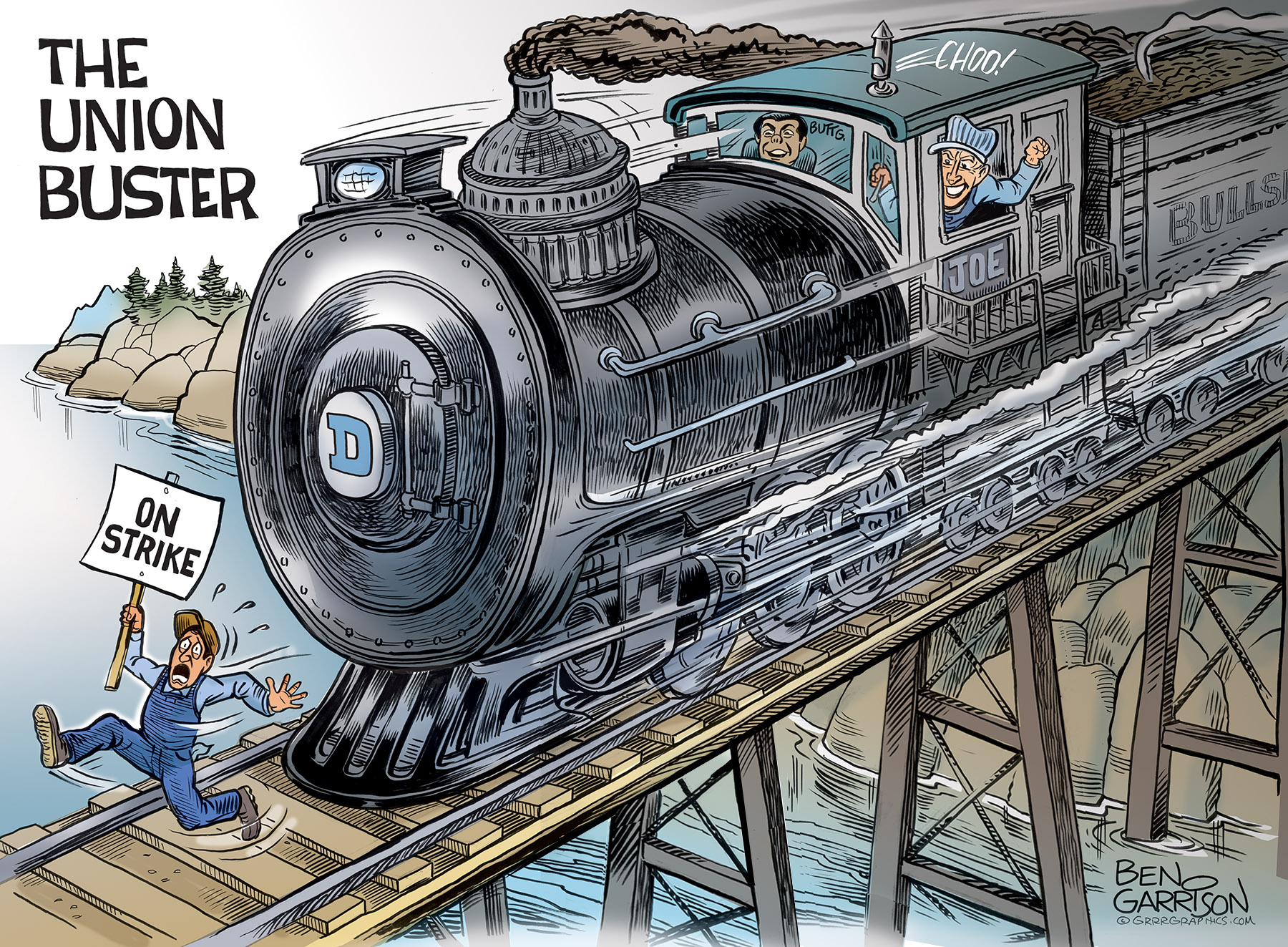 The Senate passed an already House-approved bill that ends the rail strike by force. The rail workers will have to accept the results or quit their jobs.

They won’t be getting paid sick leave, even though rail work is among the most dangerous professions out there. The Democrats claim a strike would be disastrous to our economy. The economy seemed to be first and foremost in their minds, but they seem oblivious when it comes to them sending endless and unaccountable billions of taxpayer dollars to Ukraine, which fans the flames of inflation. They also refuse to drill for oil in order to lower prices at the pump. The Democrats have damaged the very economy they now claim to want to save by sticking it to the working class.

Mumbling Joe Biden has always portrayed himself as being on the side of the working man. Good ol’ ‘lunch bucket’ Joe! He loves to say how much he supports paid leave, but that doesn’t apply to rail unions! He doesn’t want rail workers to get paid sick leave.

To be sure, the rail workers are well-paid, but they earn it. Many spend long periods of time away from their families. They are constantly ‘on call’ and work long hours. They earn that money and now it doesn’t even amount to what it should, due to massive inflation.

Why is government involved in determining wages or sick pay in the first place? We are supposed to be a capitalist country and negotiations should be between rail management and the unions representing the employees. Instead, big government steps in and tells the unions how things are going to be. It might avert a big problem for the economy, but the cost is fascism. When government and corporations are closely intertwined, it’s fascism and that’s one of the reasons why we have a banana republic today.

In other words, we lose our Republic when we allow government to determine wages and working conditions under the guise of ‘regulating commerce.’

Lying Biden and his completely incompetent Transportation Secretary, Buttigieg, are on the side of globalist corporations, not workers. Biden’s job is to protect the big banks and billionaires such as Warren Buffet. The Democrats are no longer the party of the working class. They are the party of the millionaire class, being millionaires themselves. The political class who rule over us enjoy plenty of sick leave and benefits galore while they tell us to work harder even as our dollars become worth less.

The unions can’t help their workers if they lack negotiating power. All the workers can do is quit and see if management can find replacements who are up to the task. There might be a lot of train wrecks in the future.

Your purchase supports our nation and her inalienable rights by keeping GrrrGraphics online and drawing the trigger worthy cartoons you love. We fight for all that makes America great, including you!

Just got a notice the calendars are arriving today -early- so will be signing and shipping out ASAP – You can still order your 2023 Ben Garrison cartoon calendar today! at