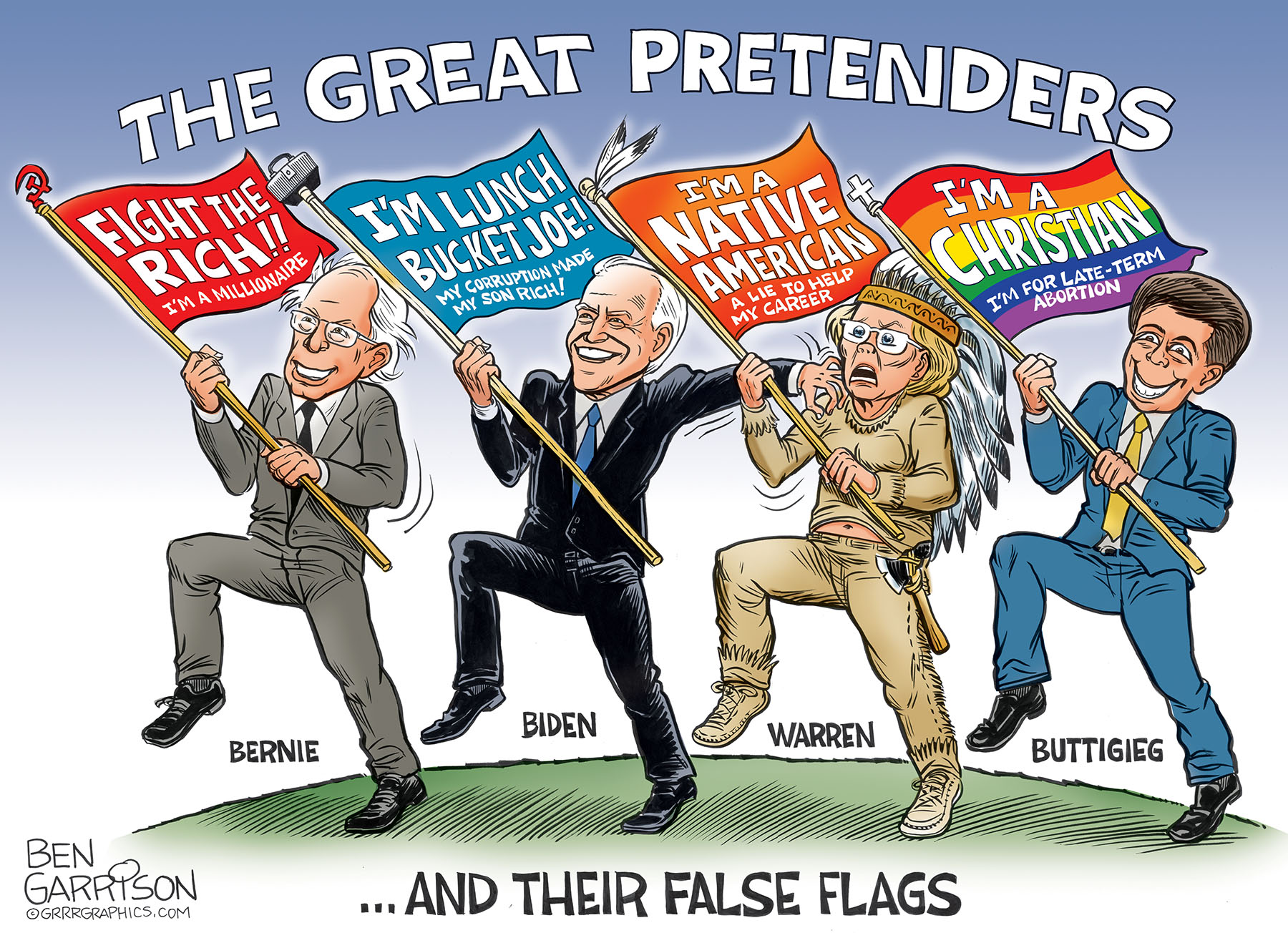 There are a great many Democrats who have tossed their collectivist hats into the 2020 presidential election ring and many of them aren’t exactly household names.

Many of the frontrunners have one thing in common: they all hate President Trump. All they have are hopes and pretenses. Many lack a genuineness that will be exposed as their campaigns drag on.

For example, let’s take Robert Francis “Beto” O’Rourke. His nickname suggests he’s Hispanic, but he’s just another privileged white male (to use the left’s vernacular). Speaking Spanish to crowds may fetch him more Hispanic votes, but most voters will see his phony game. He was not included in this cartoon because I already drew him previously, so go back to eating dirt Beto.

Thanks to You We hit Our First Goal on SubscribeStar, A free speech supporting alternative to Patreon, Support us there! Click to Join

Bernie Sanders is an old communist ready to trot out his tired old nonsense again for another go at the nomination. He tirelessly complains about the wealth gap and how the rich should pay their ‘fair share’ (they already pay most of the taxes). It’s funny that Bernie himself is one of them—he’s a millionaire. He’s a man that got rich through government directly and indirectly. Will he give up his fancy homes and wads of cash to those who have larger needs? Unlikely. Bernie is a fraud and will likely get richer through more book sales and speaking tours—just like the Clintons. Maybe he’ll start a Sanders Foundation, too. Bernie has amassed millions in donations already, but he has no chance against Trump.

Then there’s Creepy Uncle Joe Biden. When he’s not groping and sniffing, he’s arranging pay for play deals. When he was the vice president he made sure his son Hunter was set up on the board of a leading gas company in Ukraine. In exchange, that country got $1.8 billion from the U.S.

Joe likes to be known as a man of the middle class—“Lunchbox Joe”. The old hair sniffer should be renamed “Nepotism Joe”. He probably stands the best chance against Trump since he’s the candidate most closely tied to the Deep State. But like Hillary, he’s fundamentally unlikeable because he’s…well, creepy.

Elizabeth Warren lied about being a Native American for years. It helped her get into better schools. It helped her law career. Trump called her out on it, though. (So did Shiva during the Massachusetts Senate race). She was compelled to take the DNA test and it was revealed that she had vanishingly small Indian DNA. She should quit the presidential race out of pure shame, but as we know, these people have no shame. She has no chance against Trump. He would destroy her by beating the Indian drum meme.

Pete Buttigieg is the latest fresh face in the race. He’s a mayor of a small city and is openly gay. A lot of people such as Bill Maher have been singing his praises and if elected he would be our first gay president. No, he wouldn’t. Obama was our first gay president. He claims he’s more Christian than Mike Pence, and I’d rather not judge who is out-Christianing who, but Buttigieg supports a woman’s ‘right’ to late-term abortion, even on the day of delivery.

In other words, infanticide.

Really, Pete? Do you think Jesus would approve?

No—and voters won’t approve you. You and your other flag wavers have no chance against the president.

Historic 2020 Election Political Original Art Available- The Most Important Election in the Republic’s History -Chronicled By Top Cartoonist Ben Garrison- Reserve Your One of A Kind Original Art Today! Click to purchase! 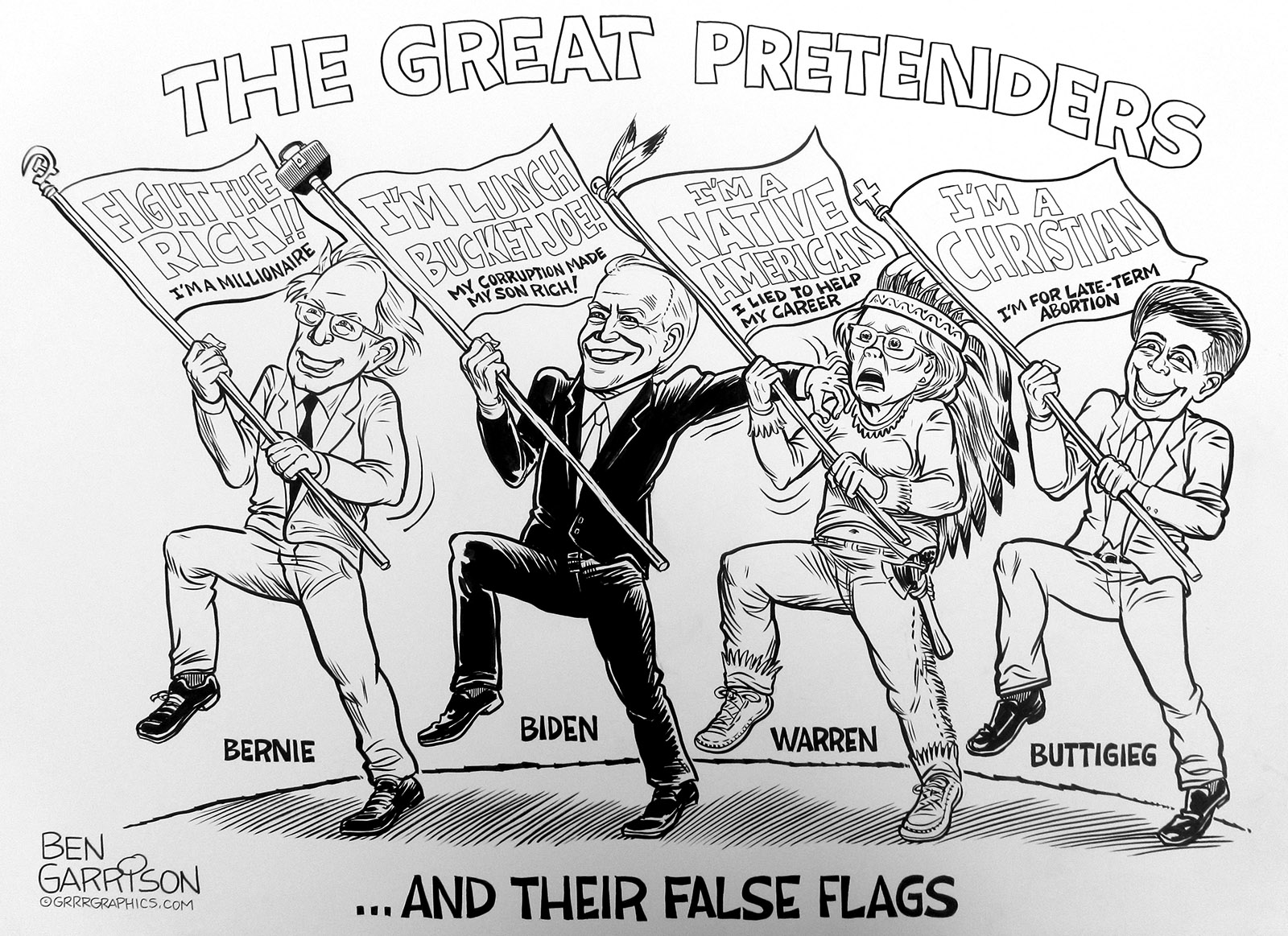