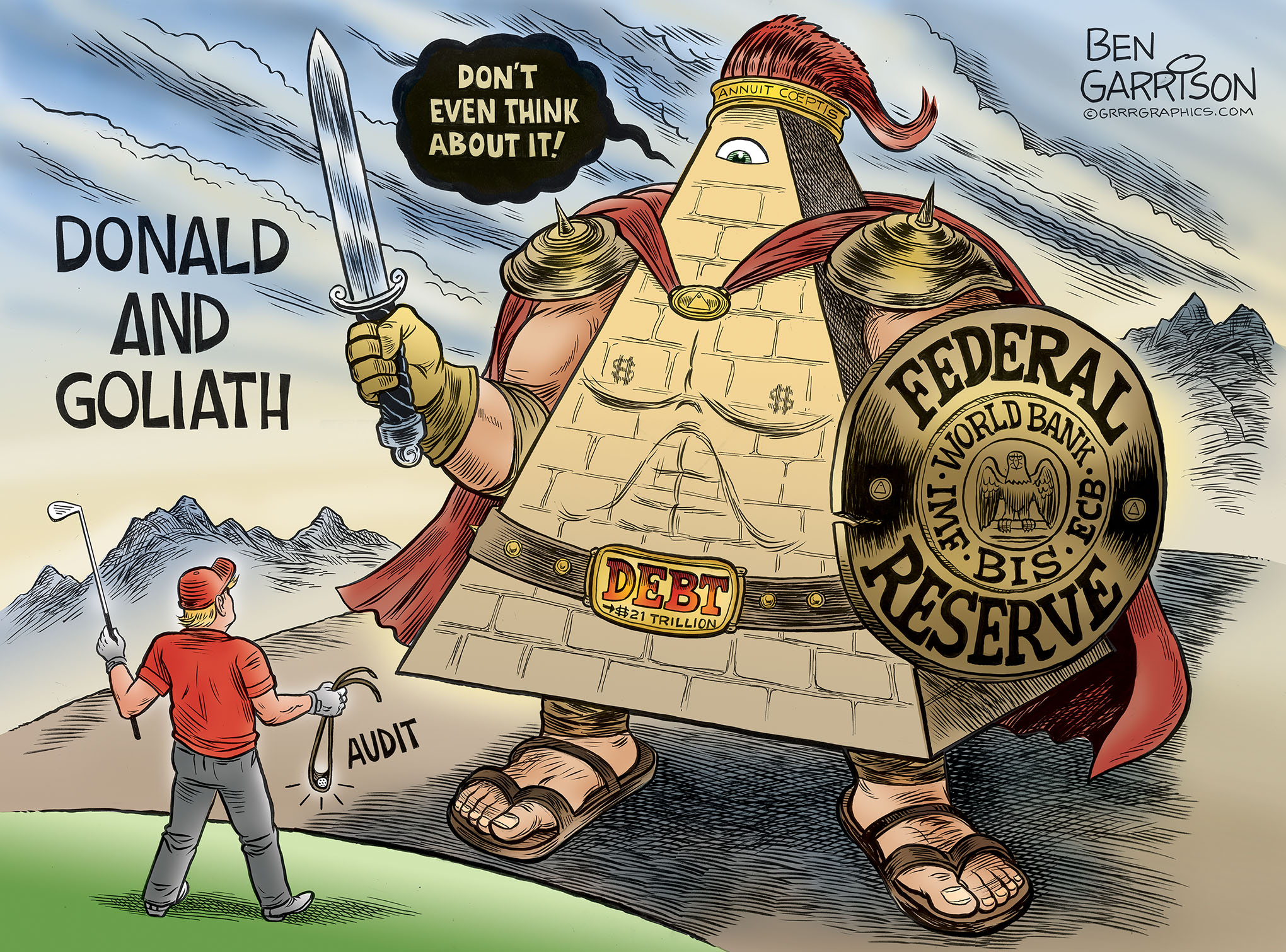 UPDATE Oct 9, 2018  “I don’t like what the Fed is doing”, Trump told reporters at the White House. “I think we don’t have to go as fast” on rate hikes. “I like low interest rates,” Trump said. Story

It is neither federal nor does it have any reserves. It began in conspiracy and got it’s start in 1913 with the promise of ending booms and busts. What we got were bigger booms and busts, along with endless war from which those private banks profited. Adding fuel to the corruption, the central bankers also enjoy fractional reserve banking. They get to abuse that and become rich and powerful while We The People get to pay interest on endlessly increasing debt.

The first step in ending the Fed is an audit. Sure, they claim to conduct their own internal audit, which they then use to assure us with a wink and a nod that everything is A-OK. It isn’t. Ben Bernanke refused to tell Congress where trillions of dollars went. They claim they need to protect their sovereign independence, an excuse they use to cover their corruption. The Fed was bailing out big banks worldwide. They didn’t want Congress or taxpayers to know where the filthy lucre was sent. An independent audit would reveal the utter corruption of the private interests that control the Fed.

If we can audit the Fed, we can then end the Fed.

There’s absolutely no reason why the Fed can’t be nationalized. Congress again would control money creation and regulation. The process could be transparent. There’s no reason why our money can’t be created debt free. Print up money commensurate with production and services. Use it to rebuild roads, bridges, canals and locks, airports and all the other infrastructure that’s falling apart in this country. Lincoln did this during the Civil War with his greenbacks. Kennedy also attempted the same. Both were assassinated.

There’s no reason to add to an already un-payable $21 trillion debt. And while I’m at it, Americans are entitled to a pay back from the Federal Reserve banks. Make them pay us back for all the illegal taxes paid on our hard-earned wages for decades. Give us back what was stolen.

The too big to fail banks are rife with corruption. Look at Wells Fargo. It used to have integrity

Now Wells Fargo does the robbing. HSBC and other banks occasional get a slap on their greedy wrists for money laundering. The pay a trifle and continue to money launder in cahoots with the Deep State. There was a story about safe deposit boxes disappearing at Bank of America. They don’t know why. POOF! Your valuables are simply taken without explanation. Carry around a large amount of cash? Police or the TSA will simply steal it. Civil forfeiture. Banks are also very reluctant to let you withdraw large amounts of cash.

Join us and help fund MAGA cartoons! Support with a Donation

No wonder Bitcoin had such a terrific run. People are desperate to find a better of system of money.

Taking on the Fed will be a daunting task. The Deep State will howl loudly with outrage. They will do anything to protect the Federal Reserve because it’s their main tool to bring about their global “New World Order.”

Trump has a painting of Andrew Jackson in the Oval Office. I hope he takes inspiration from Old Hickory’s toughness. It will be needed to once again take down the corrupt central bankers.