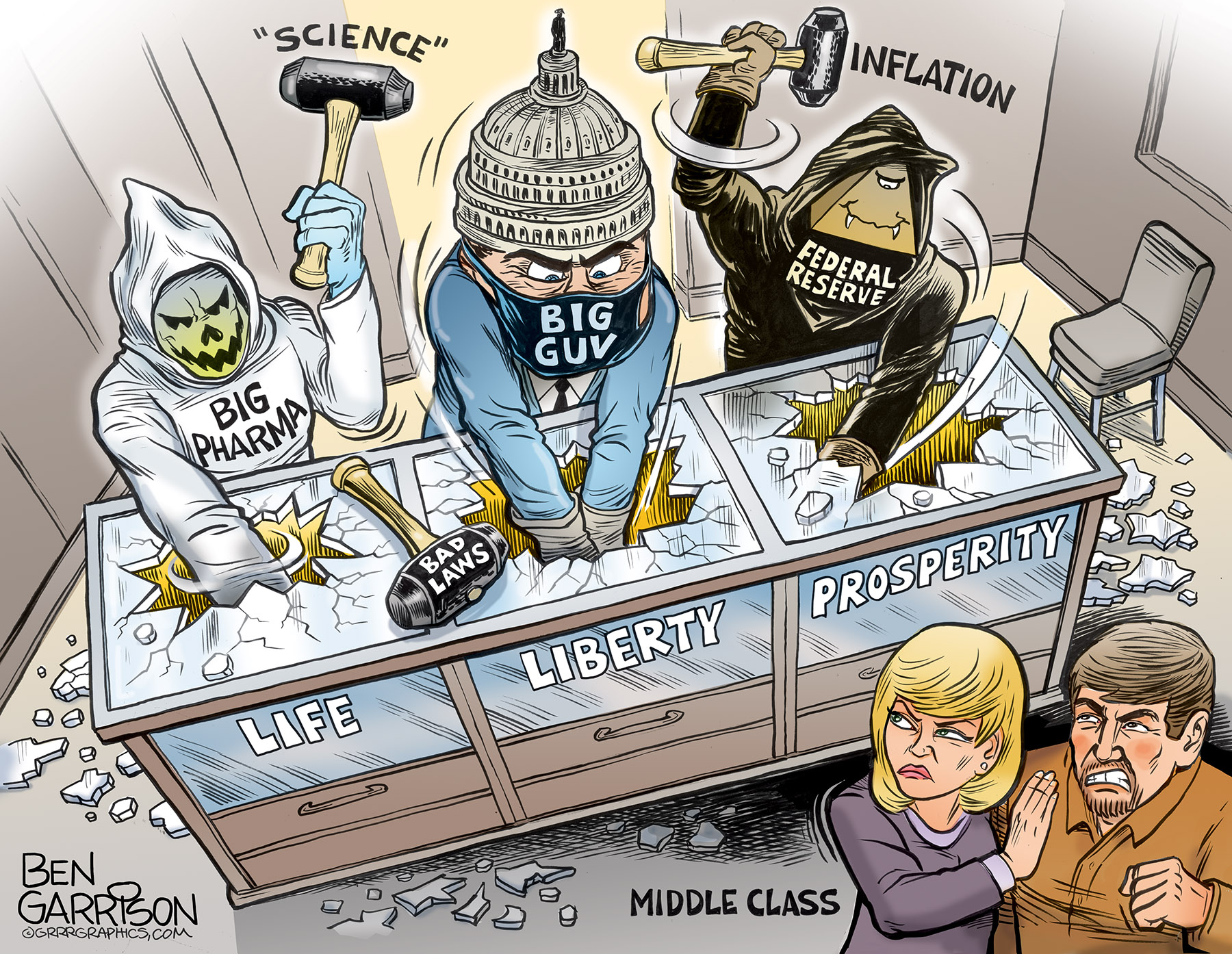 The Smash and grab Big Government criminals are looting our country

We’ve all seen the recent crime sprees taking place in the Democrat-controlled big cities. Acting in concert, flash mobs showed up to smash glass counters, steal the jewelry inside, and then make a quick getaway.

They are nothing compared to the smash and grab criminals controlling our country. I’ve drawn three here, but there are many more. The corporate media, for example. They smash and remove the truth and leave lies behind.

Big Pharma is unaccountable and irresponsible. It claims to own science, but what they really own is greed. Pfizer rakes in over $200 million taxpayer dollars per day for their dangerous and ineffective injections. The corporate media does not say a word about those injured or dying from the so-called vaccines. They don’t mention that thousands who are fully vaccinated not only contract Covid, but also die from the Chinese bioweapon.

Big Government makes laws in order to grow their own power as well as to enrich themselves. The so-called “Patriot Act” is a good example. It had nothing to do with patriotism. It had everything to do with stealing our liberties. Big Guv does this as a matter of routine. It keeps taking until it encounters resistance. Unfortunately they rarely get much push back. Too many people still think Big Guv is on their side and out to do good things for citizens. Nope. Big Guv is more concerned in getting reelected and growing more wealthy as it starts new wars. The latest may be against Russia. Yes, Big Guv wants to use US Troops and even threaten global nuclear war in order to protect the borders of Ukraine. Meanwhile, our southern borders remain wide open.

The Federal Reserve is an expert smash and grabber. It steals by means of currency creation at the flip of a switch. It is spent by the top of the pyramid and those at the bottom pay the hidden tax by means of inflation. The IRS makes sure it finishes the job of wealth confiscation, thereby making the working class poorer.

The criminal government gets away with it because they own a monopoly on force. Try and resist and they will send armed functionaries to arrest you. Resist arrest and you could be murdered. Included in the government mob are Big Pharma and The Federal Reserve. The politicized FBI does as it pleases, too. The CIA has been rogue almost from the start.

They will all continue until they are stopped. They will only stop when there is nothing left to grab. When that happens we will have no freedom, no privacy, and no dignity. We will own nothing and live in a technocratic dictatorship unless the war mongers decide to destroy all life on Earth first by means of a nuclear war.

The time to push back against this tyranny is now.