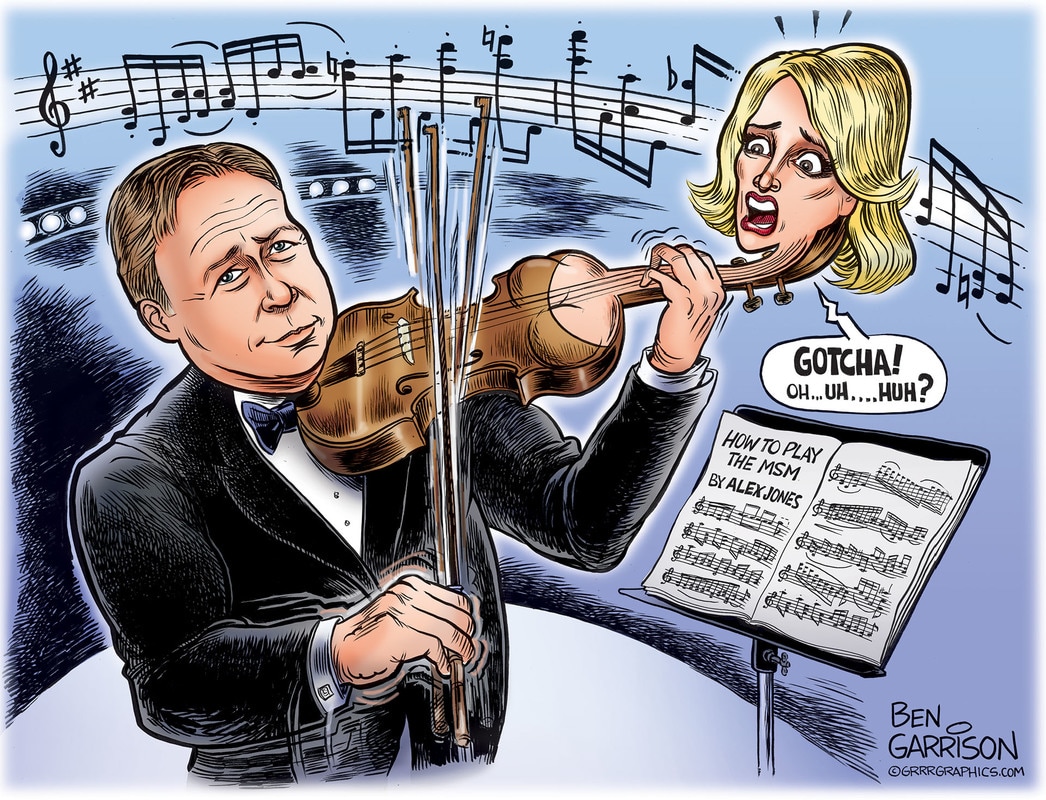 We’re beginning to see more clashes between the Legacy media and Internet-based journalists. Submitted for your viewing pleasure is a cartoon that sums up the interview Megyn Kelly conducted with Alex Jones.

Megyn left Fox for NBC and now she makes around $15 million per year, but Alex didn’t have stars in his eyes. He took her to school and played her like a violin. He knew she was out to play the ‘Gotcha!’ game. Her goal was to discredit Alex and by extension President Trump, who granted InfoWars press credentials.

Megyn promised to go easy on Alex to get him to agree to the interview, but she went into vicious attack dog mode as soon as it commenced. She grilled him on Sandy Hook in particular and then proceeded to selectively edit Alex’s comments to cast him in a bad light. Some advertisers are threatening to pull their ads from the show because they find Alex offensive. Alex wants NBC to cancel the segment because it turned into the hit job he expected. What Megyn didn’t know is Alex recorded their pre-interview session and he has proof of her disingenuousness.

NBC doesn’t want to cave in to Alex, so they may be forced to air the interview as a face-saving measure. That will upset their advertisers and give Alex more publicity. If they cancel the segment, NBC and Megyn will be admitting defeat. Either way, it’s a win-win situation for Alex because the mainstream media will be further discredited.

I happen to catch Glenn Beck interviewing the big leprechaun, Bill O’Reilly, over the matter. O’Reilly pompously stated Megyn should not given Alex Jones ‘a forum.’ He also claimed he didn’t know who Alex was and didn’t even know he had a radio show. Yeah. Sure, Bill. What O’Reilly showed me was that the MSM will do or say anything to discredit alternative media. The corporate MSM may have deep pockets, but they’re continuing to lose credibility, viewers and readers. It’s good to see them swinging wildly—and missing. A citizen journalist working for little or no money on the Internet often has far more credibility than the overpaid deep state propaganda blowhards on TV.