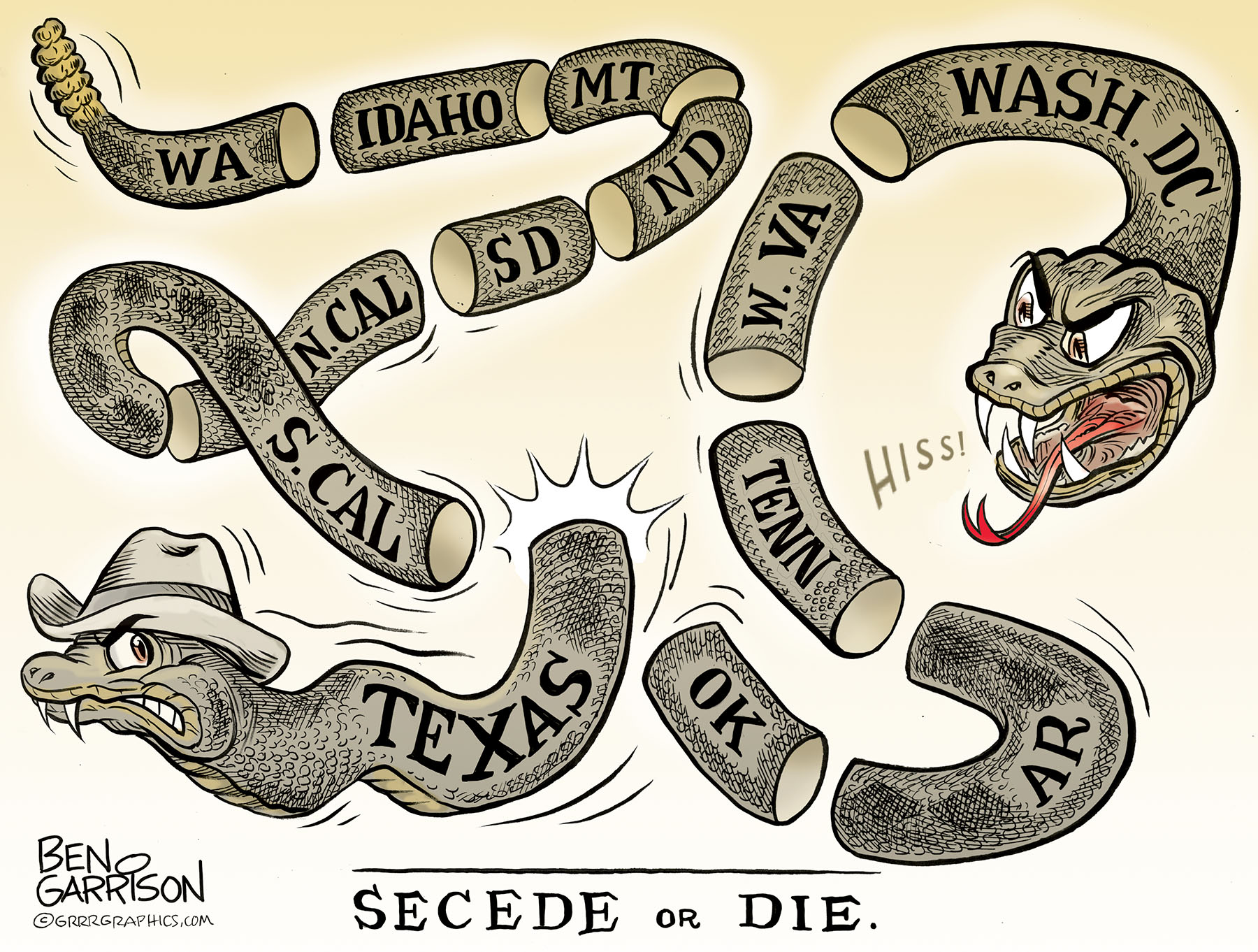 The first editorial cartoon published in America was said to be penned by Benjamin Franklin himself. Its title, “Join or Die,” was used as an inspirational meme during the Revolutionary War. The early American states had to combine in order to defeat British tyranny. Now we have an illegitimate regime in Washington D.C.

After stealing the election, the Democrat Socialists are now coming after Trump supporters, whom they consider ‘terrorists.’ They lie and say we are trying to kill them while they actively marginalize roughly half the country as enemy combatants. They’re even censuring a lawfully-elected representative, Marjorie Taylor Greene. Even many of her fellow Republicans (RINOs) have denounced her. Why? Because she supported Donald Trump a bit too vociferously.

Sign Up For GRRRNews and NEVER miss a new cartoon- click to join our news letterAs socialists, the Democrats naturally hate Christianity. It’s predictable. They want to destroy our culture, our economy, and our freedom including freedom of religion. Yes, that will be extinguished too. Communists want to be worshipped and they will permit only their own religion, the worship of the state.

The Biden regime is quickly undoing President Trump’s accomplishments, while telling us we need to wear two to three masks at once. Biden and his comrades love the masks because they are symbols of submission–even though they do more harm than the virus itself. Masks cause bacterial pneumonia and impede oxygen flow to the brain. It’s not about health, though. Not really. What the socialists want is medical tyranny. They want us to pay for unlimited and even late-term abortion even if we disagree with the practice. They want us jabbed with deadly vaccines containing aborted fetal tissue. It’s not science, it’s ghoulishness.

Help fight against the tyranny of Big Tech, Democrat Communists and Cancel Culture! Will You Make A Donation to Support Our Work Today?They want to destroy our economy—especially our oil industry. They want open borders. Those in power are globalists, not nationalists. They talk about spreading ‘democracy,’ which really means they want to spread socialism. They have destroyed our Republic.They have also destroyed our free speech and now they want to take away our guns. One way is through ‘licensing,’ which involves getting evaluated by government psychiatrists who will judge our mental competency before granting us the right to own a firearm. My guess is they will be very picky about doling out approval—especially to conservatives. Regardless, we all already have a license—it’s called the Second Amendment. The socialist control freaks are constantly working to infringe upon it.

What the socialist Democrats are doing is far worse than what we rebelled against with the British.

Therefore, the best solution may be ‘un-join and live.’ States should consider seceding from the unrecognizable and incredibly corrupt political hot mess that used to be our country. Why send money derived from our hard-earned labor to traitorous criminals back east? Why let our young citizens get sent to insane foreign wars to fight and die in order to fatten the wallets of the military industrial complex? Why pay money and respect to corrupt security agencies, courts, and politicians who hate us and deserve our contempt? Why be chained to the evil Federal Reserve?Yes, the time has come for the red states to secede. Perhaps Montana can join with the Wyoming, the Dakotas, Idaho, as well as the eastern parts of Washington and Oregon. We can use gold and silver as a basis for a new currency. Northern California can separate from the insane leftist Hell scape that Southern California is becoming. Maybe states in the south such as Arkansas, Kentucky, Tennessee, Alabama, and West Virginia can all work together as well.

The key is getting ONE state to start to the process and that needs to be Texas. The Lone Star state should seceded and regain its independence. The Republic of Texas! Now that has a good ring to it.Secede or Die!—Ben Garrison

Do we smell coffee? Buy Ben a virtual “Coffee” – a fun way to send a small donation through pay pal! Thank you for the hot coffee! Click To Send