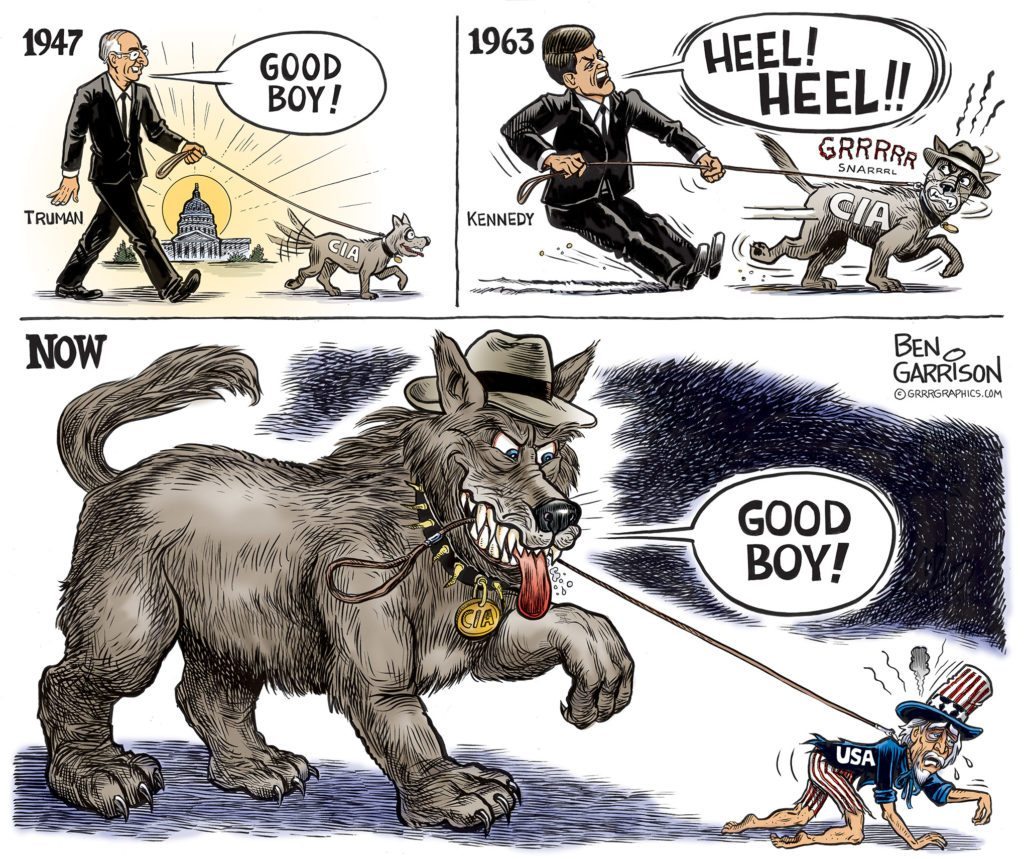 Our founding fathers never wrote the Central Intelligence Agency into our Constitution—and with good reason.

An unaccountable institution that can hide under the claim of ‘national security’ at every turn while conducting secret operations that include routine violations of our Bill of Rights and even outright torture would be unthinkable to the great men who started our Republic.

The CIA has over 21,000 employees under a $15 billion dollar annual budget and perhaps more (think about the missing trillions just before the 9-11 attack). Add up the budgets of all the secretive alphabet agencies and it pushes $50 billion per year. Combined with the tax dollars that are fire hosed into the military industrial complex and we’re looking at over $800 billion per year spent on a military empire controlled by operatives who are unaccountable to We The People. In other words, we aren’t allowed to know where much of the money is being spent. Hush hush! Just shut up and pay the shadow government.

The CIA had its origins in WWII. Spy operations and code cracking existed among the various military branches and the FBI, but it was decided in 1947 that a ‘centralized’ agency was needed to better coordinate and comprehend the data. Thus the CIA was created under The National Security Act of 1947. President Truman found that he had a private army theoretically under his power, but later on he expressed trepidation toward a ‘dangerous’ and secretive agency capable of all sorts of clandestine operations that could spark war and conflict with other countries.

Kennedy heeded Eisenhower’s warnings about the military industrial complex and secret organizations gaining too much control over our country and he decided to do something about it. CIA Chief Allen Dulles was instrumental in the coup in Iran that installed the hated Shah. He also was involved in the coup in Guatemala and failed coup against Castro. Kennedy at first praised Dulles, but wised up later on during his administration and fired him. Allen Dulles was miffed. Kennedy was assassinated. LBJ appointed Dulles to head the Warren Commission, which helped cover up evidence while pinning the blame on a ‘lone gunman,’ Oswald. With Kennedy gone, the CIA and the Deep State were able to pursue Vietnam and rake in the dough while 58,220 Americans died in a futile war. LBJ himself profited handsomely because he controlled a huge amount of Bell Helicopter stock.

The CIA has grown use to overthrowing governments and they got away with it again when Kennedy was killed. Most people in those days trusted their government and the mainstream media. They swallowed what the Warren Commission shoveled. The CIA’s string of successes made them grow even bolder. It got so bad that President Ford set up an Intelligence Oversight Board to help stop abuses. The CIA promptly made sure the board was filled with cronies by the time Bush came along. The board did nothing. Whistle blowers were harassed and silenced.

The movie “Snowden” helped reveal the CIA’s modus operandi and it’s abhorrent. Edward Snowden is the quintessential whistle blower who believes in our Constitution. He showed how the CIA and its spinoff, the NSA routinely records everything we say on the Internet and on cell phones. People are being spied on through their own web cams on personal computers. Make sure you keep that covered! Computer microphones are turned on remotely and we are listened to. They can even track us through ’smart’ TVs. This is all a violation of our Fourth Amendment and each instance is a felony, but it helps them dig up dirt to extort us all and especially Congress. The CIA chief under Obama, John Brennan, even hacked Congress directly and got away with it. It was Snowden’s duty to sound the alarm and he did that courageously. I believe he should be pardoned, but unfortunately President Trump doesn’t see it that way and even called Snowden a ‘traitor.’ You’re wrong, Mr. President. It’s the operatives in the CIA and the Deep State military industrial complex that are the traitors. It’s time to do what President Kennedy wanted to do: Break them up and make them accountable to the rule of law under our Constitution. And while you’re at it, let’s break up the central banks and end the Fed, too.