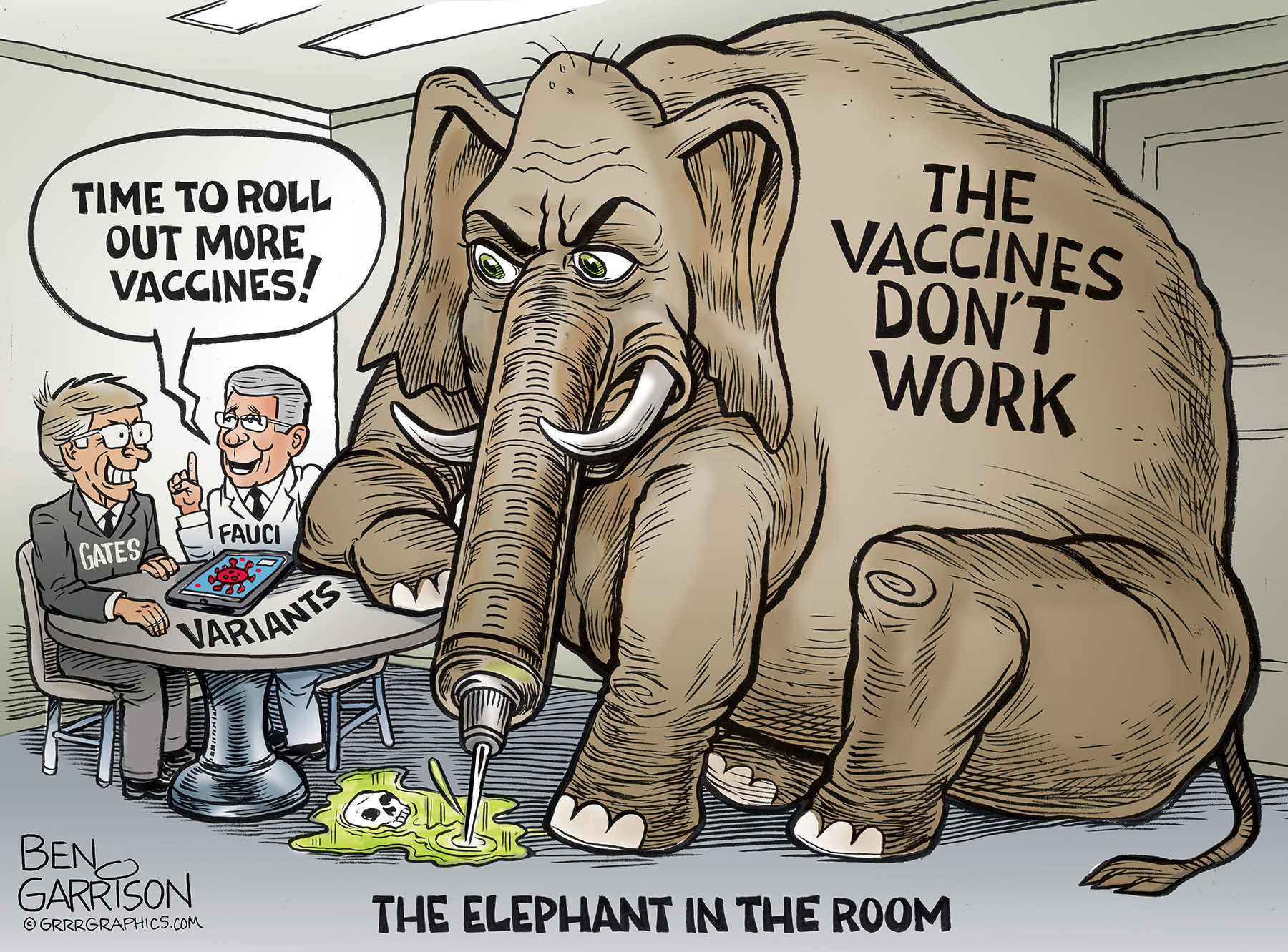 In America we are all entitled to an opinion. The First Amendment guarantees our free speech. Unfortunately, many are now censored for having an opinion that does not align with the ‘official’ one pushed by the globalist ‘authorities.’ In particular, any opinion that contradicts the current and ongoing medical tyranny is banned. We at GrrrGraphics recently endured a one-week suspension on Twitter merely because one of our cartoons questioned the abuse of vaccines.It’s my opinion, based on copious evidence, that the so-called vaccines for COVID-19 aren’t working. That said, we at GrrrGraphics are not dispensing medical advice. If you insist on getting jabbed with experimental gene therapy drugs, then that’s your decision.

Back in February Anthony Fauci pronounced the Covid injections to be “100 percent safe and effective” at preventing death by the Chinese bioweapon he helped fund. This was ridiculous if one considers that it usually takes a new vaccine nearly a decade of trials and testing before given to mass populations. In this case, billions around the world have been subjected to a giant lab experiment.

By April, Fauci downgraded his glowing scientific analysis and said no vaccine is 100 percent effective. No kidding. Everyone’s body chemistry is different. A one-size fits all inoculation is crazy. Some are allergic, some have already had vaccine damage and can’t take more. Due to the lack of testing, who knows what dangers lie ahead for the vaccinated.

Then we found out the vaccines did not stop the jabbed from transmitting the virus. Then we found out the vaccinated could still contract COVID-19, but Fauci said if that happened the symptoms would be less severe. Then we started hearing about people who were fully vaccinated yet still died from the virus, and along the way we read many stories of people dying from the vaccinations themselves.

Fauci has been promoted as the very embodiment of science, but he’s often wrong. He was wrong about the treatment of AIDS sufferers about three decades ago. Many died from him recommending the drug, AZT until it was pulled from the market.  Israel recently awarded Fauci a one million dollar prize for ‘speaking truth to power’ amid the so-called pandemic. That was a howler. Fauci is the sadistic face of power that has corrupted science. Let’s not forget he funded the torture of beagles. A man who is cruel to animals has no problem being cruel to human beings.

Now we’re seeing increased Covid cases and deaths among the fully vaccinated. The lying corporate media won’t talk about it, but, you can find plenty of evidence presented by real journalists.

We will have continue to hear about one variant after another. Coronavirus tends to mutate. That’s why it’s tough to cure the common cold. I’m sure Fauci and Gates will recommend endless boosters and new vaccines. Gates, Fauci, and Big Pharma, will all continue to rake in even more taxpayer money. More people will die, but that’s the New World Order’s plan. Fear will continue to be fanned because it’s necessary for the globalists’ Great Reset plan. That plan includes far less humans on a planet owned by the oligarchs at the top of the pyramid. 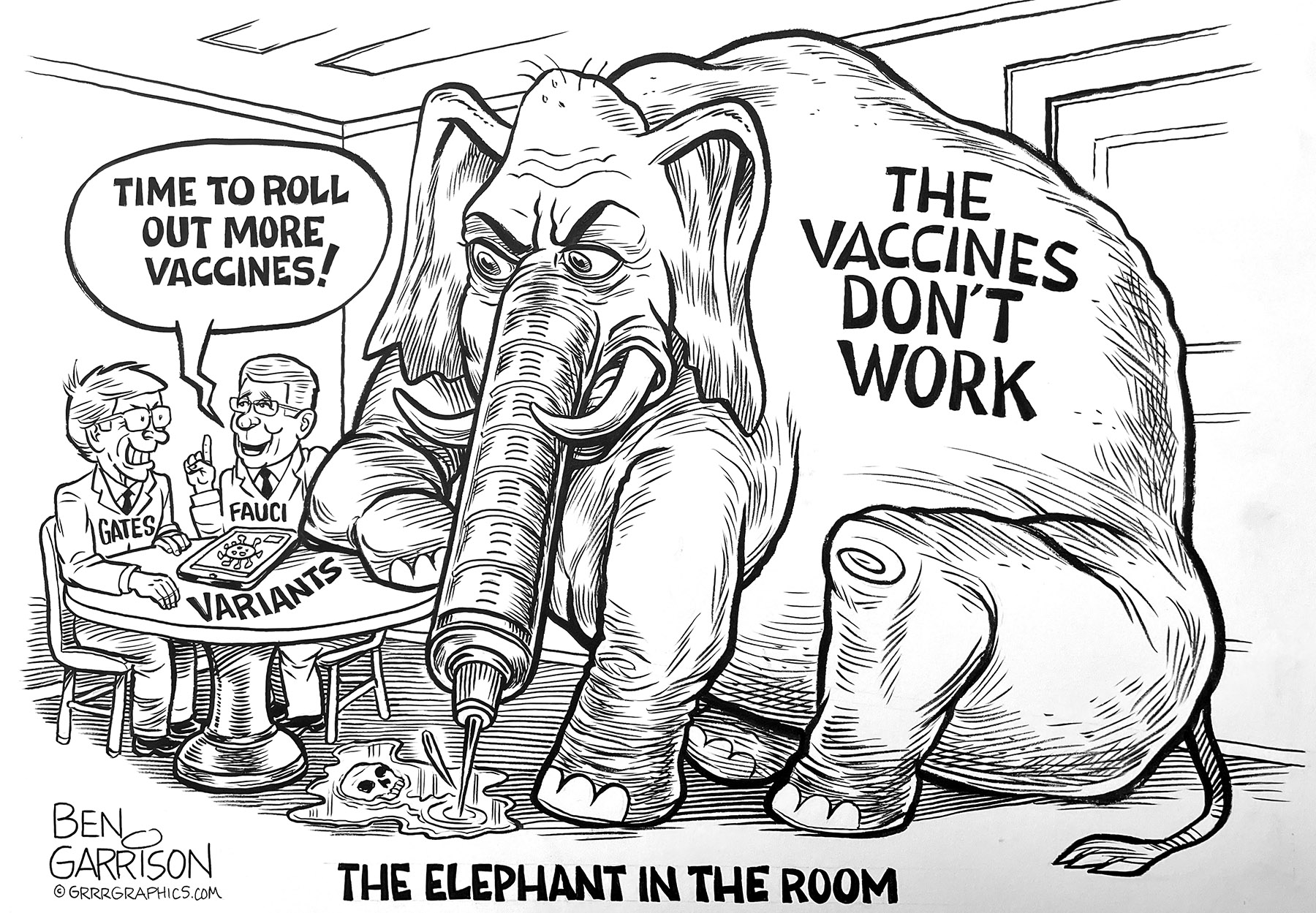