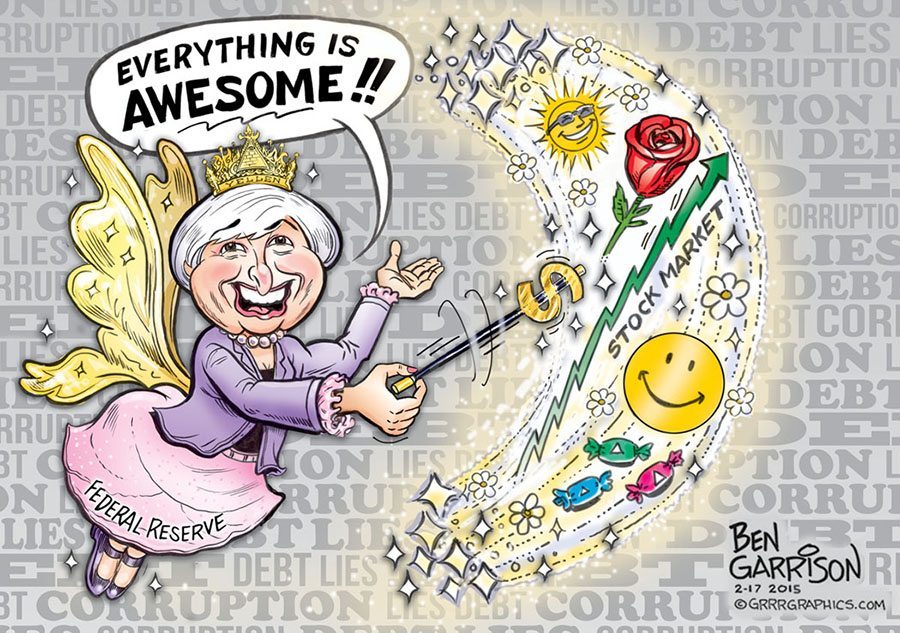 Janet Yellen’s job is to distort reality and keep people believing that the Federal Reserve is an egalitarian, competent entity necessary for stable, sound money. It’s precisely the opposite. The Fed is in place to empower and enrich a tiny elite at the expense of most Americans. Since 1913 when it was allowed to gain control of our money, it has orchestrated booms, bust and endless war to enrich and empower the globalist bankers who own the Fed. Most Americans were asleep and didn’t realize they were slowly turned into slaves via the Fed’s debt money. Now that they’re beginning to wake up to the greatest con game in world history, the Fed is anxious to proffer a counterfeit reality. They claim the economy is improving and, in fact, that it’s doing so well that they’ll need to raise interest rates ‘soon.’ This is a lie. The Fed can’t raise rates without making the rapidly expanding debt even more unmanageable.

Meanwhile, the Fed continues to pump money into the stock market, which continues to go so high up it’s ready to leave the solar system. Quantitative Easing, a fancy phrase for money printing, has never ended. The Fed uses that money to prop up ’their’ stock market while claiming it’s a sign of a booming economy. Who benefits the most? The 1 percenters who own most of the stocks. The central bank owners themselves are already unimaginably rich and they are enriching themselves still further. The 1 percent controls 40 percent of the nation’s wealth. They own most of the stocks while middle class America is going away. Most are living paycheck to paycheck while the rich get fabulously richer. The Fed would have us celebrate that fact. In fact, half of the wealth in the entire world is owned by 1 percent of the population.

Thanks to the Federal Reserve, the rich are getting incredibly richer. For them, things are ‘awesome.’ Bear that in mind during tax season. Your taxes aren’t needed. They could merely print up what they need. The national debt is beyond the point of no return. All taxes do is help pay for your own enslavement and globalist wars to protect the dollar hegemony. Taxes are in place as an enforcement tool. They’re there to waste your time and create fear. The tax code is impossible to understand. That’s intentional. Anyone could be painted as a tax cheat that way. They want us all to be criminals. If you don’t pay, the IRS can take your stuff. They can take your stuff on a whim anyway. You’re guilty until proven innocent. They claim the Income Tax is ‘voluntary,’ but few will refuse to volunteer because in realty the government has a gun to our collective heads. It’s a police state.

The Fed is anxious to prevent an ‘audit.’ No need to pull back the closed curtain to reveal their vast landscape of corruption. Remember this the next time the smiling Janet Yellen spouts her fairy tale of optimism to an obsequious Congress.